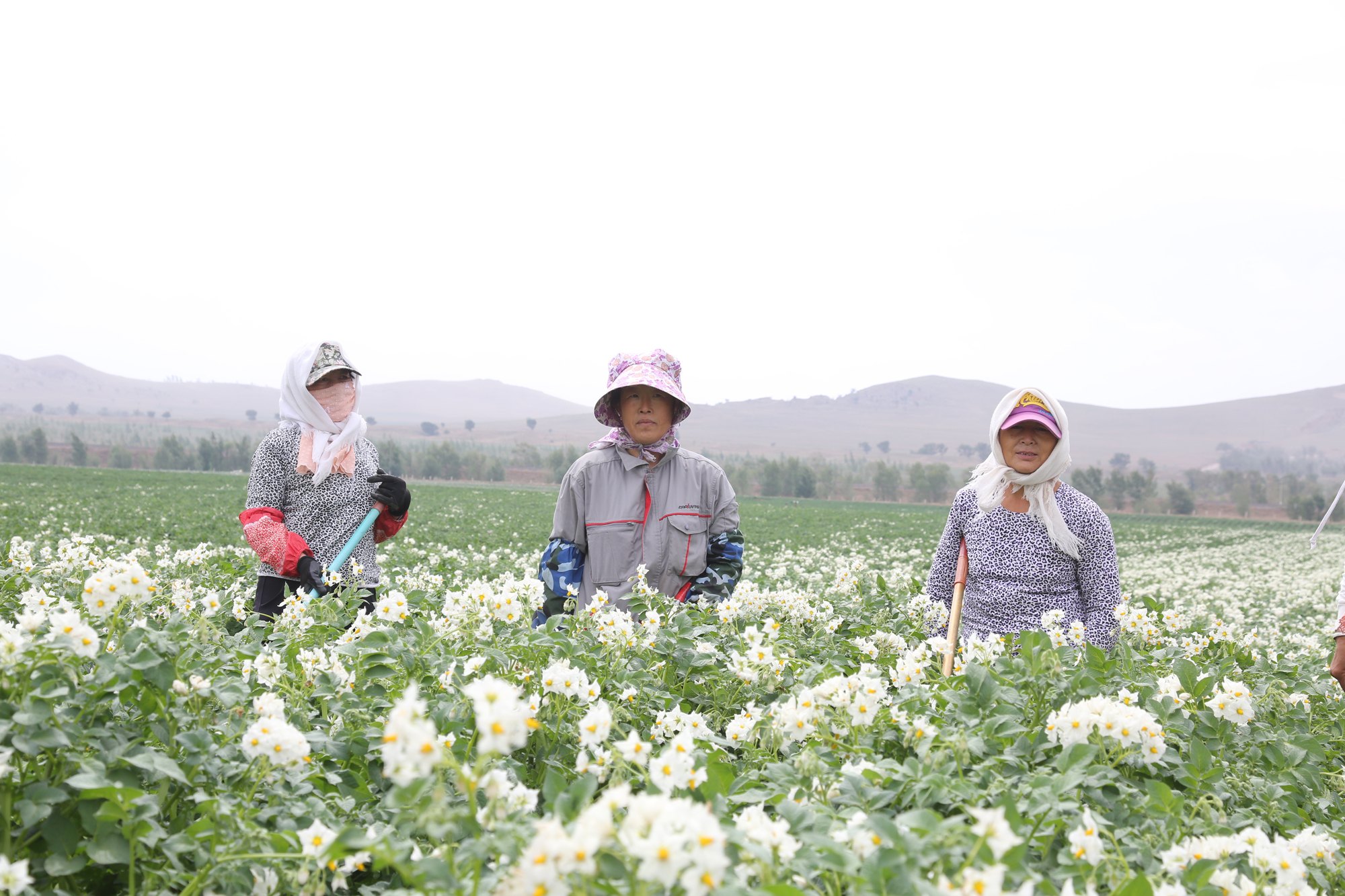 When it comes to drones, China leads the world. Shenzhen-based DJI, for instance, commands about 70 percent of the world’s consumer drone market. However, as the consumer market saturates, Chinese drone startups are increasingly turning to their home market for growth, especially through commercial applications in farming.

“In China, if you want to do things at a large scale, you can’t be too sophisticated,” Lucky Wu, CEO of drone startup Hive, tells Tech in Asia. “You have to make something fundamental, something with more demand.”

“That’s why we chose agriculture,” he adds.

Hive is one of several Chinese drone startups targeting the country’s agriculture industry, which is in dire need of disruption. Though China only has 7 percent of the world’s farmland, it feeds a staggering 20 percent of the human population. Increasing desertification is a pressing concern, as is China’s changing demographic in the countryside. Massive urban migration and declining population growth have lead to the aging of rural labor and lower agricultural output.

Given that drones have the potential to boost efficiency through soil and field analysis, as well as crop dusting (spraying of chemicals), it’s no surprise that local governments in China are keen to encourage their use in agriculture. For example, in November 2016, Jiangxi’s provincial government started subsidizing agriculture drones with a 50 percent discount, with a maximum reimbursement of around US$29,000.

“Drones can help farmers lower their costs, as well as increase their profits,” says Lucky. “Our goal is to have one of our drones in every village.” Based on the outskirts of Beijing, Hive develops its own crop dusting drones that spray pesticide. Comparable to other products on the market, such as DJI’s Agras MG-1, Hive’s drones can carry up to 10 kilograms of liquid at a time and spray about 50 acres of crops per day. Each device costs about US$5,000.

For farmers that don’t want to buy and maintain a Hive drone, the startup also offers a crop protection service, where they charge about US$1.50 for every 0.16 acres of land sprayed, not counting the pesticide. Including chemicals, it’s US$2.90.

That’s quite the meteorological spread. “Inner Mongolia is vast and open, so sometimes the wind will be fairly strong,” says Lucky, when asked about the effects of climate on Hive’s pesticide spraying service. Sometimes, wind levels will reach seven – a near gale, according to the Beaufort wind force scale – which is something the startup has had to consider when designing their drones.

Hive is working with Foxconn, the Taiwanese powerhouse known for its production of iPhones.

In addition, farmers have to start applying pesticide at around 3am in Inner Mongolia to avoid the noonday sun, which can increase the vaporization of pesticide, especially in low humidity.

The startup has also had to deal with rural logistics, a key offline component of the agriculture drone industry. Luckily, Chinese commerce giant JD is helping them with that, as it has more than 1,700 brick-and-mortar after-sale service and distribution centers in China, known as “Jingdong Bang.” Started in 2014 to help JD with distribution and delivery in rural areas, Jingdong Bang is now helping Hive’s clients gain access to pesticide and drones. It’s also teaching farmers how to control Hive drones via smartphone.

JD’s financial arm, JD Finance, is working with Hive to solve another pain point in the agriculture industry – a lack of financial liquidity. JD Finance is offering farmers credit for Hive drones, so they can be paid over the course of 10 months. And for manufacturing, Hive is working with Foxconn, the Taiwanese powerhouse known for its production of iPhones.

“Beijing Foxconn is close to us and they have a lot of experience in technical craft,” says Lucky. For instance, the Taiwanese manufacturer has helped Hive create more resilient drones that can withstand fog, dust, and corrosion. “These are things that a startup team that might not be able to do because it requires experience,” he explains. These partnerships mean that Hive is able to run a fairly lean team of less than 30 employees – most of whom are dedicated to research and development – while reaching the far-out corners of China’s countryside. By the end of 2016, the startup says it covered around 13,333 hectares of land with its pesticide spraying services.

But Lucky and his team have their sights set beyond pesticide services and drone sales. Hive is developing and launching its own battery-swapping drone platform, which Lucky calls a ‘beacon.’

“It’s a remote-controlled, distributed IoT network, and every drone is a flying computer,” he says. Not only will beacons be able to automatically change batteries and refresh chemical payloads on Hive drones, but they’ll also be a way to track and monitor their movement. When beacons launch, they’ll have their own intranet connecting themselves to each other and Hive drones. Lucky says that Hive plans to launch its beacon product and start testing it this year.

Every drone is a flying computer.

“You can easily create a copy of Facebook but it’s very difficult to compete against Facebook because it’s a huge network,” he explains. “Beacons follow the same logic.”

“If we have a beacon system with 10,000 beacons and it’s collecting all kinds of data everyday […] this network will be very valuable,” he says. Data could include information about flying routes, humidity, wind levels, soil pH, and the variety of crops. Aggregated together, Hive could analyze farm productivity, information about climate, and even peasant credit, given Hive’s partnership with JD Finance.

Beacons could also help Hive raise the bar for domestic drone competitors, such as DJI and ZeroTech, all of which have developed their own agriculture drone variants. Xaircraft, a drone startup founded in 2007, has also started targeting Chinese farmers. It’s partnering with Ant Financial, Alibaba’s financial affiliate and a competitor of JD Finance, to rent its drones to farmers, rewarding those with higher Sesame Credit scores with lower deposits.

Outside China, other drone startups, such as Israeli drone firm Airobotics and Singapore-based H3 Dynamics, are also developing their own drone stations. This week, 10 months after publicly announcing their drone platform, Airobotics received a permit to operate drones in Israel without a human operator or eye contact. Still, despite all the promises of drone-powered agriculture, there are still very practical barriers to widespread adoption. In China, for instance, less than 2 percent of farmland uses drone technology.

“Why are so many companies unable to do this well? Because they don’t understand crop protection technology or the form of [pesticide] dosage needed,” He Xiongkui, professor at the Center of Crop Protection Equipment and Spraying Technology at China Agricultural University, tells Tech in Asia. “Some kinds of chemicals have special requirements.”

In particular, there aren’t many pesticides that have been designed specifically for agriculture drones, says Eda Erbeyli, project manager at research firm Daxue Consulting over email. “Sometimes the nozzle of [agriculture] drones will be blocked.” Hive’s drones, for instance, can’t process pellet-based pesticides, though the startup is working on developing a solution for it.

Additionally, there are still key technical barriers to widespread adoption of drones in Chinese farms, namely battery life and coverage. “[Drones] can’t be used over big plots of land. On big plots of land, they’re not efficient,” says Xiongkui. “Before they’ve even flown to the other end, they run out of chemicals.”

That means that on large, open fields, traditional tractors are faster than drones, covering hundreds of acres a day. On smaller parcels of land, however, drones do have an advantage. “They’re very efficient on small plots of land or places where tractors can’t reach,” explains Xiongkui. Rice paddy fields, orchards, or farmland on mountains and hilltops also benefit from crop dusting drones.

Gaining regulatory approval and support will also be key to the development of China’s agriculture drone industry. Last year, the Chinese government released a few guidelines on drones weighing less than 150 kilograms, but no nationwide regulations for agricultural drones. So far, local governments, such as those in Henan, Jiangsu, and Shandong, are taking things into their own hands with subsidies.

“[Chinese officials] will never throw down strict regulations and draw a line, like American government officials,” explains Lucky. “They’ll never do that.” Before cracking down on a few, bad cases, the government will first let the industry develop in a gray area – that’s where agriculture drones are right now, he says. It’s not a bad place to be.

“Right now, it’s not just that government officials don’t regulate it – they encourage it,” he says.