The round brings the startup’s total funding to date to US$8 million and will fuel its expansion across Asia.

Travel is immensely popular in the region but consumers face difficulties in discovering tidy hotels at reasonable rates. The practice is to use Agoda or Booking.com, but many small hotels are not on those platforms. If they are, they get crowded out by the ones with the ability to pay for higher ranking in the results.

Like other Rocket companies, Zen Rooms takes after a proven business concept – India-based Oyo Rooms. It partners with budget hotels to build a network of rooms that it spruces up to provide a standardized service. In exchange, it takes a commission out of each successful booking.

Customers can expect, at the very least, six things: a clean room, comfortable bed, in-room shower, flat-screen TV, air conditioning, and wifi – for as low as US$10 per night. The company says its rates are 30 to 40 percent cheaper than traditional budget hotel chains.

Co-founder Kiren Tanna declines to give detailed information on how the company’s performing, except to say that “our unit economics are healthy, which is why both new and existing investors are investing.”

“Our average order is US$85 which is comparable to ecommerce, but we don’t incur any delivery related costs,” he adds.

From its launch in 2015 to date, Kiren says the company has generated tens of millions of dollars of bookings for its partners. “In 2016, we grew 20 times in booking volume and this year we are projected to grow five to eight times.”

Zen Rooms is working with more than 1,000 properties in the eight markets where it has a footprint: Indonesia, Thailand, Singapore, Hong Kong, Philippines, Malaysia, Sri Lanka, and Brazil. Indonesia, where the company first launched, is its biggest market.

“While these are our focus markets, we are also considering expansion to Australia and New Zealand, North Asia, and Vietnam,” notes Kiren. 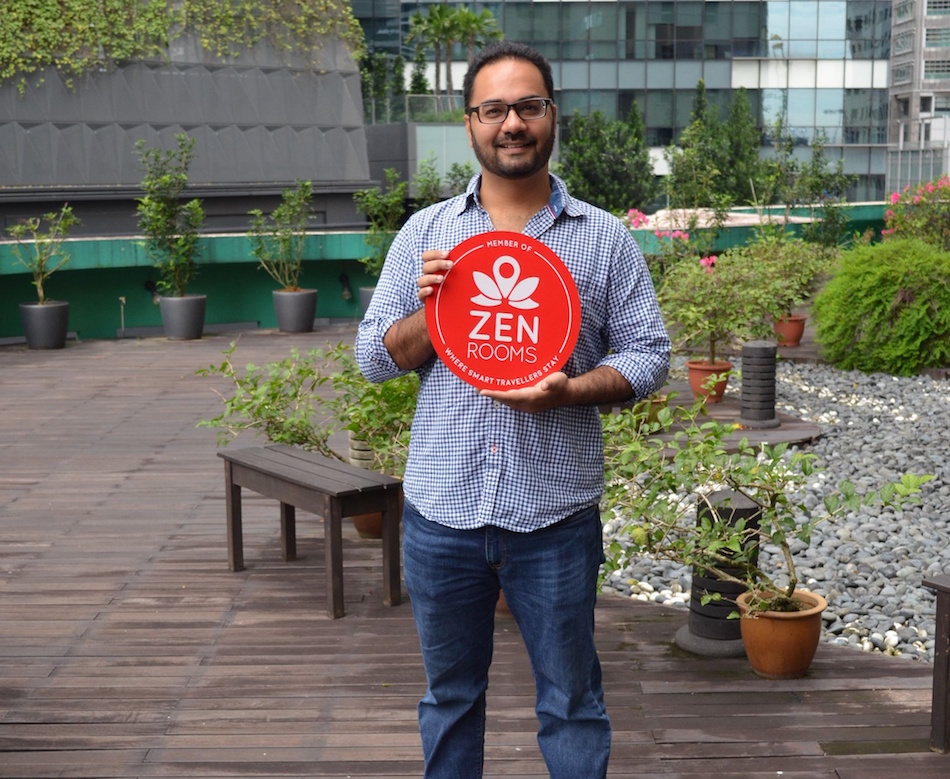 It won’t be completely smooth sailing for the Rocket-backed startup though. The market has heated up as more entrepreneurs grasp the potential this niche promises. Tinggal in Indonesia has funding and support from India-based Wudstay. There’s also another Indonesian player called Nida Rooms, which got injected with fresh cash after experiencing financial troubles late last year. Zen Rooms also faces competition from Singapore-headquartered RedDoorz and predecessor Oyo, if the latter decides to expand beyond India.

Nonetheless, Kiren is confident his team will be able to stand out by focusing on innovation. “Our DNA is to pilot new disruptive features that make customer experience great.”

With the new funds, Zen Rooms will further scale its recently rolled out features such as pay-at-hotel, which is a 100 percent card-free booking. “This is a key move to further democratize travel in a context where the majority of the Southeast Asian population is unbanked today. After piloting it with great results, we are currently deploying the option across our franchise base. We are very confident it will do to the hotel sector what cash-on-delivery did to ecommerce adoption.”

Zen Rooms also has self-check-in kiosks and locks. In addition, it’s working on a new version of its mobile app to make the whole process – from booking to checkout – seamless.