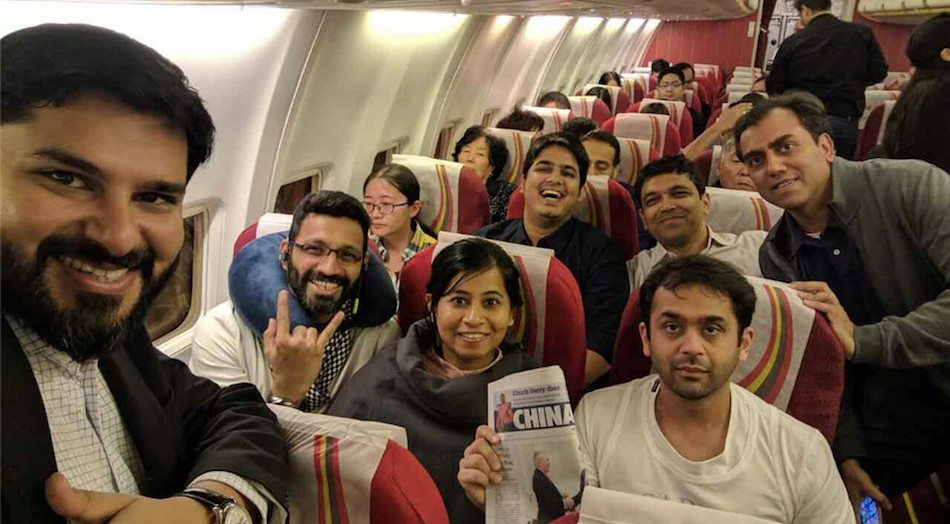 Two busloads of Indian founders and investors went around China’s major tech hubs recently. In the first part of this series, we explored the potential they saw for Chinese investments to rise in India – as well as challenges.

Today, we look at some of their takeaways from the trip: an environment in which businesses scale at breakneck speed; pragmatic governance that enables it; and risk-taking entrepreneurs who innovate with local business models.

The ecosystem in which a startup grows has a lot to do with its fortunes. The five-fold difference in size between the Chinese and Indian economies has an obvious impact. So the public infrastructure and purchasing power of consumers brought ‘oohs’ right from the time we landed in Guangzhou Baiyun airport and took the connecting flight to Beijing, where a politburo meeting of the Communist Party of China had just ended. We heard the air was cleaner than usual because industries around Beijing had been ordered to shut for a week before the meeting.

There are no comparables in the scope of scale development at this point of time.

It’s easy to attribute China’s success to the absolute power of one-party rule, compared to the democratic political system in India where decision-making tends to be mired in argument – a sour-grapes reaction that usually crops up in a discussion on China. But it becomes apparent during the trip that there’s more to it than that.

Entrepreneurship – triggered by economic reforms and growth – is playing a larger role in changing China and making it a more conducive environment for startups to thrive. A visible manifestation of it was in the WeChat ‘red packets’ that started getting passed around in the group soon after arriving in China. Mostly it was a game, but also useful when somebody was stuck without cash in a cab.

The ease of mobile payments in China is taken for granted now, but the advent of Alipay – and later WeChat Pay – was disruptive to traditional banking. The government chose to be a spectator – and in doing so, allowed the disruption. It doesn’t mean the government is hands-off. Just that it takes a pragmatic view on what it takes for China to grow – and entrepreneurship forms a big part of that. It knows it has control and can step in when it wants.

When to do that is becoming an increasingly complex balancing act. For example, ride-hailing app Didi Chuxing may lose many of their drivers from new regulations enforcing hukou, which ties people to their residential domains for work.

However, Shanghai-based business strategy consultant Edward Tse contends that disruption will continue to spread to more industries as entrepreneurship is now entrenched in the system. In his book, China’s Disruptors, he recalls a speech back in 2013 at the China Entrepreneurs Forum – also known as the Chinese Davos. Mtone Wireless chairman Victor Wang argued for a transformation in governance, from a passive acceptance of entrepreneurship to actively supporting it. He concluded his talk with a warning on the cost of not doing this – and a slide showing a bomb.

The effects of a win-win are palpable in China.

This might seem like an inflammatory speech in a country where political dissent is condemned, writes Tse. But he points out that Wang wasn’t advocating a change in China’s political system, “but rather that the needs of its entrepreneurs should be accommodated within the system.”

Karthik Reddy, managing partner and co-founder of Blume Ventures, one of India’s earliest and most active seed funds, echoes the sentiment in a chat with me halfway through our tour. “A policy of win-win seems to be understood here more than anywhere else,” he says, after visiting the headquarters of Huawei and Tencent in Shenzhen – China’s first special economic zone. “In India, it’s often a sparring between one stakeholder and another to maximize gains.”

What Karthik was referring to was not just negotiation between government and business, but also between corporates and startups. He’s well-placed to compare this with the scene in India, having been in the thick of helping many a fledgling startup from his portfolio. “For corporates in India, whether it’s M&A or investment or vendor relations, fundamentally ingrained in their DNA is ‘If I win, you have to lose.’”

Steven Millward of Tech in Asia writes that China, too, was like that – until it evolved into a model more like Silicon Valley, where tech giants catalyze the startup ecosystem. For Sampad Swain, CEO and co-founder of Instamojo, an enabler of digital transactions for small businesses in India, the effects of the “win-win” are palpable in China. We were sitting next to each other at a typical rotating table in a Chinese restaurant. He told me – between nibbles at a tofu I persuaded him to try – that the cost of a digital payments transaction is so low in China that it’s almost futile to compare business models between the two countries.

But it shows what’s possible. In India, the setting up of a unified payments interface (UPI) – where some of the country’s leading tech evangelists worked with the central bank – held out hope of a better digital infrastructure. Sadly, it got bogged down in execution, as banks resisted relinquishing control, and even had a public spat with a digital wallet.

Compare that with the wait-and-see approach of the Chinese authorities. It watched from the sidelines when mobile payments disrupted banking – and went on to make digital transactions cheaper and more convenient. But in the case of P2P (peer-to-peer) lending, the authorities came down hard with tighter regulations after a Ponzi scheme was exposed. The point is that a disruption of traditional industry will be allowed in the early stages – until it proves to be bad.

See: Paytm founder prepares for his next pivot, which could be the biggest yet

A digital infrastructure is falling into place in India, despite the jockeying for position by various stakeholders. Even though there are unresolved issues around privacy and security, more than a billion Indians are registered for a biometric authentication system through a unique ID called Aadhaar.

But, “I wish that were enough,” says Karthik, with a shake of the head, looking out of the bus window at the tall buildings, intertwined flyovers, and sheer scale of physical infrastructure that China has been able to put in place – thanks to decades of high economic growth led by exports from low-cost manufacture. There’s only so much that digital hacks can achieve in circumventing the lack of physical infrastructure. 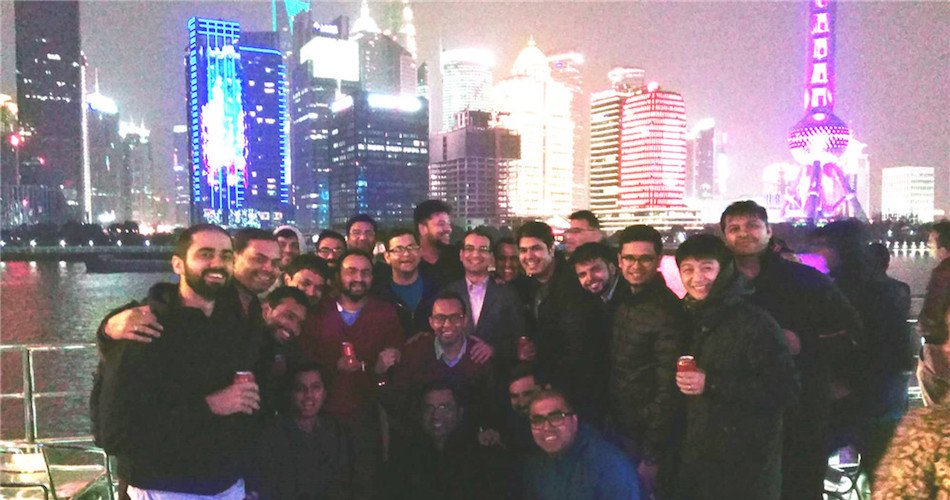 No comparables, only lessons

India’s current GDP growth rate above 7 percent holds out hope of achche din (good times) ahead. But until then, infrastructure is a handicap businesses have to cope with in India. Just how wide is the gap became apparent on the trip.

“It came up in conversations with our entrepreneurs,” says Karthik. “We’re fighting inefficiencies over and above our demand-side issues [of low purchasing power and adoption of tech] … There are no comparables [with China] in the scope for scale development at this point of time.”

See: Alibaba and the 40 founders from India

Pallav Pandey, CEO and co-founder of Indian rentals brokerage FastFox, can only look on with eye-widening disbelief at the scale of his startup’s counterpart in China, Lianjia, which has an outlet on almost every street in urban China even though it is primarily an online real estate site.

Pallav and his co-founder, Anshul Gupta, who was also on the tour, visited some of the Lianjia outlets, posing as customers. They wanted to observe their service delivery process.

FastFox, too, has an O2O (online-to-offline) model to solve the problem of unreliable listings on property classifieds. But nowhere close to the extravagance of Lianjia’s deployment of people to check on properties and show customers around – which is not surprising given the cool US$863 million it raised in a series B round last year.

In a chat with me later in our hotel lobby, Pallav says he’s both impressed and unnerved by how Lianjia manages its scale. He shudders to think what will happen if the property bubble pops. 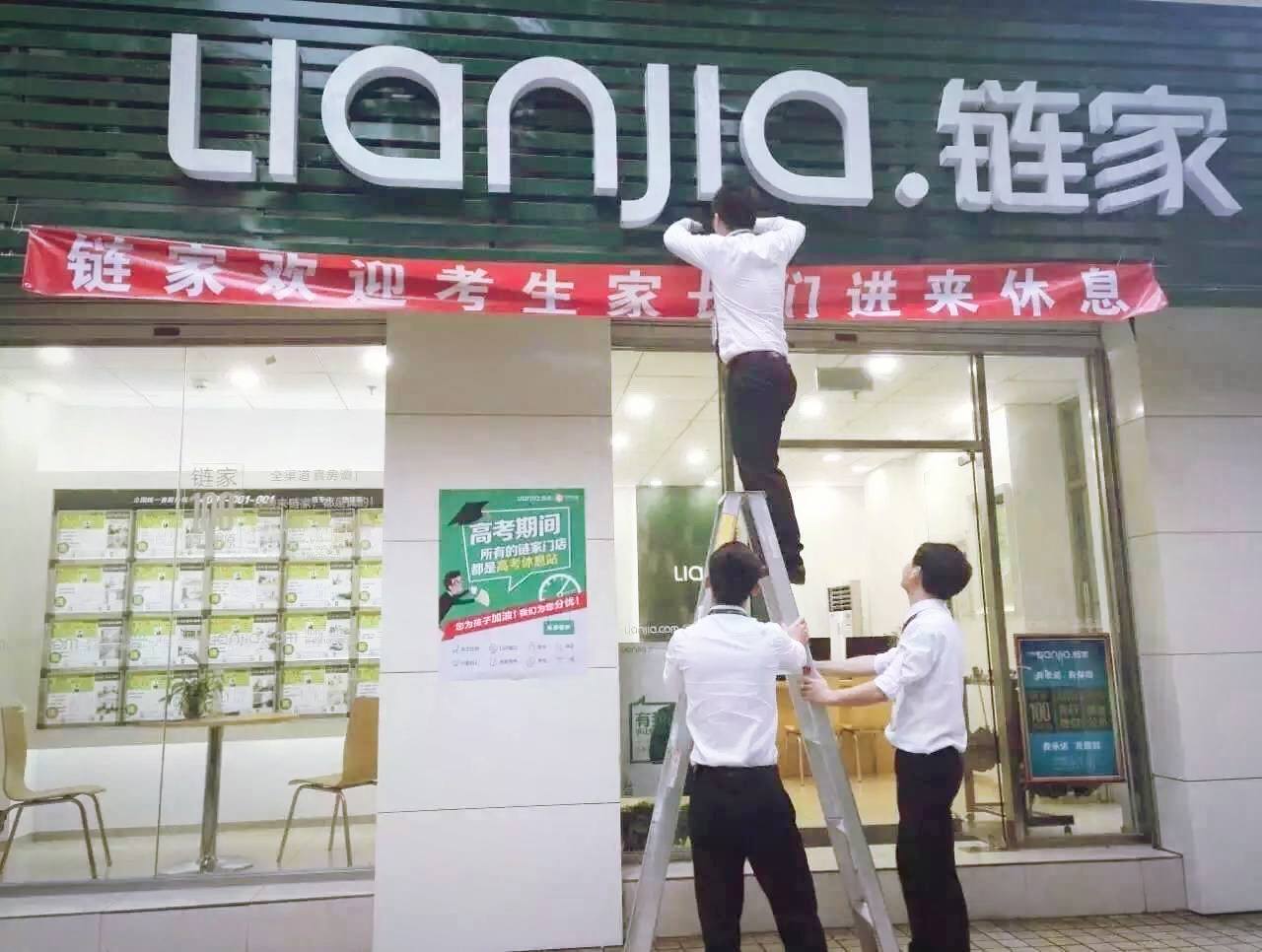 India’s startups are mostly obsessed with Silicon Valley. Many of their founders have studied, lived, and worked in the US after passing out of premier engineering colleges in India. So it’s a natural connection.

But some of those who came on this trip found there was perhaps more to learn closer home, in China, where entrepreneurs are tackling issues that arise with scale in a market with similar demographics and issues – like Lianjia. Here they saw how Asian business models like WeChat work on the ground, with payments, ecommerce, and on-demand services all rolled into a social media app – unlike Western models which tend to focus on one core competency.

With few role models to emulate in India, especially in the consumer internet space, Chinese startups operating in a market that’s not yet as mature or developed as the US provided them with useful benchmarks. As somebody quipped, it’s like taking a time machine a few years into the future in India.

As for competing in the Chinese market itself, I heard misgivings in private conversations. Apart from the language barrier, Indian product startups worry about loss of IP (intellectual property), given the Chinese notoriety for re-engineering products and replicating services. One senior tech exec I spoke to informally on the trip even made a virtue of copying. He explained that in China, the first step to innovation is be able to copy well. Then make incremental innovations.

Chinese companies may have to rethink that as they become larger players on the world stage and aspire to operate in different markets, as well as attract innovations from outside.

See: She’s studying Hindi in China with an eye to the future of tech

Cross-border exchanges such as ours can whittle away at the barriers, both perceived and real, on both sides. On the final day of our tour in Shenzhen, I shared a cab with Sanjay Nath, the other co-founder and managing partner of Blume Ventures, and Jason Wang, CEO and co-founder of Beijing-based ZDream Ventures, which has an outpost in Gurgaon and organized the “Chindia connection.”

Sanjay marvelled at how little the two tech ecosystems had interacted despite straddling a combined population of 2.7 billion. Jason told us he had bet his shirt on making this happen. And why not, if entrepreneurial connections can overcome the old political rhetoric that has held the two countries back from a win-win.