In China, Amazon’s ‘store of the future’ is already open

Amazon showed off its automated Go grocery store concept at the end of last year, but a few months later postponed any actual shop openings.

One Chinese startup, however, is steaming ahead with its own version – and has already opened a handful of staffless convenience stores where customers open the door and pay the bill with their phone.

This is a typical Bingobox store. Last month, the startup opened its first outlet in Shanghai after a few months of testing in its home city, Zhongshan, in southern China. 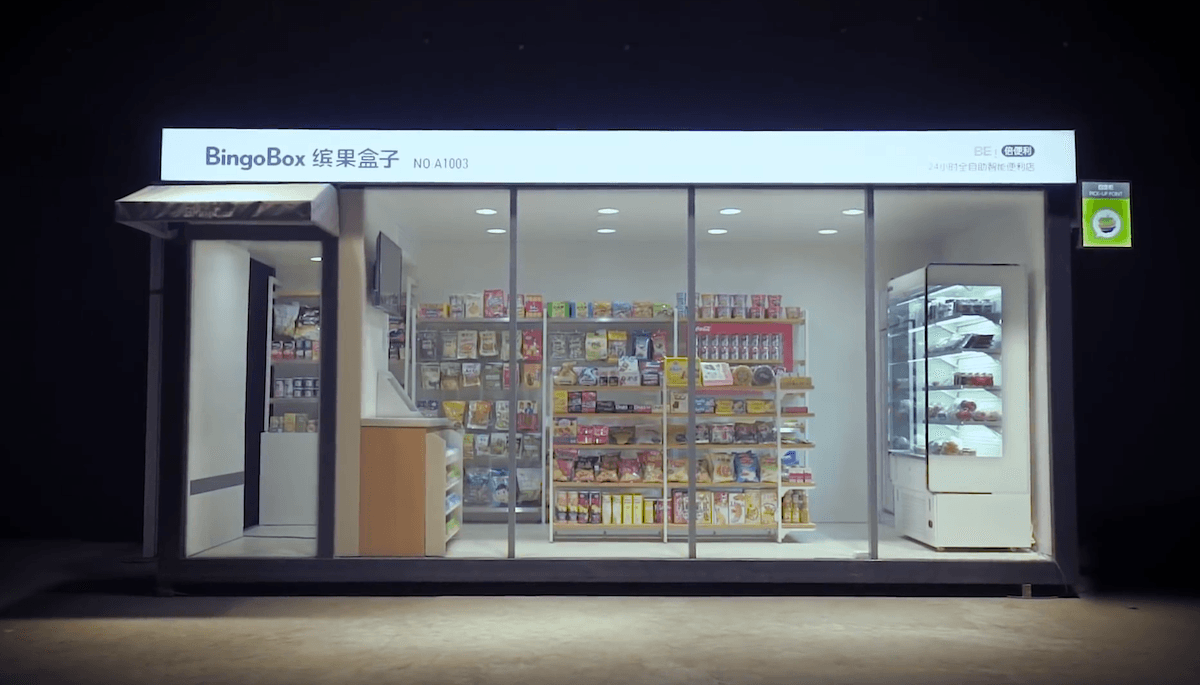 A shopper opens the door – and registers with the startup – through WeChat, the popular messaging app.

Although small, the Bingobox store stocks hundreds of items – including a small selection of fresh foods.

The customer has to scan each item’s barcode. And then pay on their phone, either via WeChat or Alibaba’s mobile wallet app, Alipay.

As you leave the store, a camera checks you’re taking out only the stuff you paid for.

In-store cameras use facial recognition to check for unregistered users who shouldn’t be on the premises. While each store is unmanned, a human customer support line is available via video link. Each Bingobox store is mobile, so the franchise owner can put it where they like.

A human staffer is needed for stock-taking and refilling purposes – which the startup claims can be done in just 20 minutes.

The startup is trying to woo franchise owners with the promise that only four staffers are needed to run 40 stores.

Bingobox yesterday revealed it has secured US$15 million in series A funding to aid with early expansion, with GGV Capital as lead investor.

It’s not quite as slick as Amazon Go, however.

The startup has already partnered with French supermarket giant Auchan – which is huge in China – to handle store inventory.

“We have built a team of artificial intelligence experts to research and develop technologies including product recognition and sorting algorithms. Currently, the technology has successfully recognized over 200 types of products,” said Chen Zilin, Bingobox founder and CEO, to Chinese media.

What the startup has created is not quite as slick as Amazon Go, however. Jeff Bezos’ US$450 billion giant wants shoppers at its Go stores to be able to walk out without scanning or physically paying – instead, its computer vision and sensor tech will know what you’ve decided to take and will simply bill your Amazon account automatically shortly after you’ve left the shop.

Still, the prevalence of both WeChat and Alipay in China means that consumers are ready for stores like Bingobox. The question now is whether the tech is good enough to keep an eye on us mischievous humans.