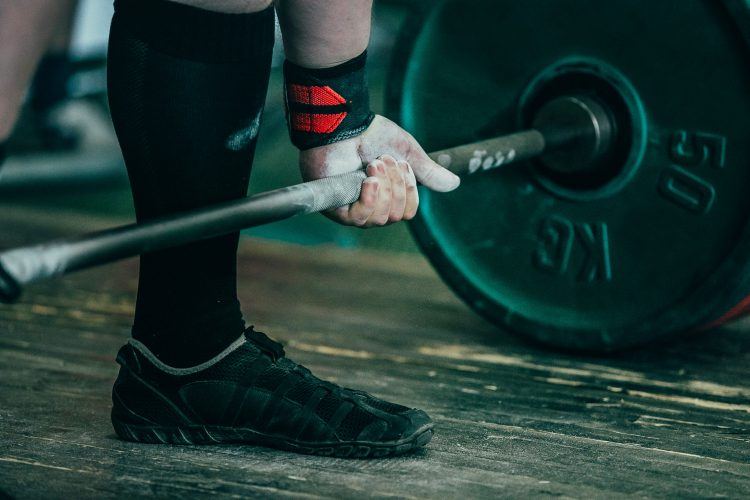 The Meranti ASEAN Growth Fund – which takes its name from one of the tallest tree species in Southeast Asia’s rainforests – has so far raised US$50 million of its final target of US$200 million. Malaysia Venture Capital Management (MAVCAP), home shopping company GS Shop – part of Korea’s GS Group – and Indonesian investment firm CKM are the three initial limited partners of the fund.

Meranti aims to make investments of US$5 million to US$20 million in around 15 to 20 companies. Its focus will be on the cloud computing, ecommerce, and fintech spaces, as well as tech startups specifically catering to Muslim consumers. Its first investment was in Indonesian fashion startup Sale Stock’s US$27 million “series B+” round.

It is Gobi’s fourth Southeast Asia-themed fund – and its ninth overall. However, Meranti marks a significant departure: it will be making investments in series B and C rounds, unlike its forerunners which focused on early stage bets. 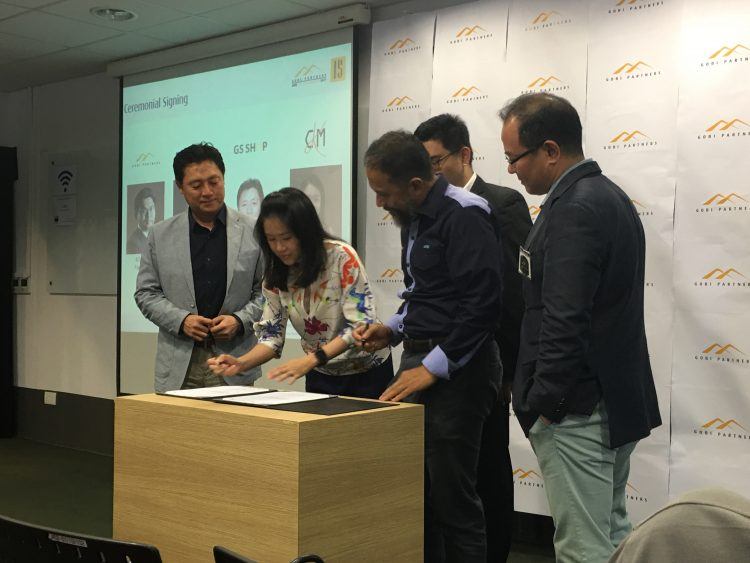 Announcing the closing of the fund’s first tranche in Singapore on Wednesday, Gobi’s founding partner Thomas Tsao said that the firm established Meranti to address a substantial shortage of growth-stage investment in Southeast Asia’s tech startup ecosystem. He described the situation as a “funding barbell,” with money gravitating towards each end of the scale – either seed and series A rounds, or later stages, with the critical growth phase at series B and C missing out. “It’s not because there are no good companies to invest in – far from it,” he said. “It’s just that funding hasn’t caught up yet.”

Several ASEAN governments have now realized that startups have a major role to play in the region’s economic development. Therefore, the public sector has been encouraging and facilitating seed-stage investment. Many of the successful companies that were among the early beneficiaries of these types of policies have since struggled to secure follow-on funding. Tsao says that it’s important for the private sector to now step in and pick up the slack. “In China, we will continue to focus on series A. But we saw an opportunity in Southeast Asia, and felt we had to fill the gap ourselves,” he said.

The lack of growth-stage capital – in terms of series B investment in particular – is something that has been noted by other investors and startups active in the region.

Data from Pitchbook indicates that over the past few years a greater proportion of venture capital has gone to the seed stage in Southeast Asia compared to the rest of the world. It appears that investors have been less willing to back series A and B rounds – as well as later growth rounds – in the region.

The chart below shows the share of deals at each stage as a percentage of the total number of disclosed deals in Southeast Asia between 2013 and 2016: 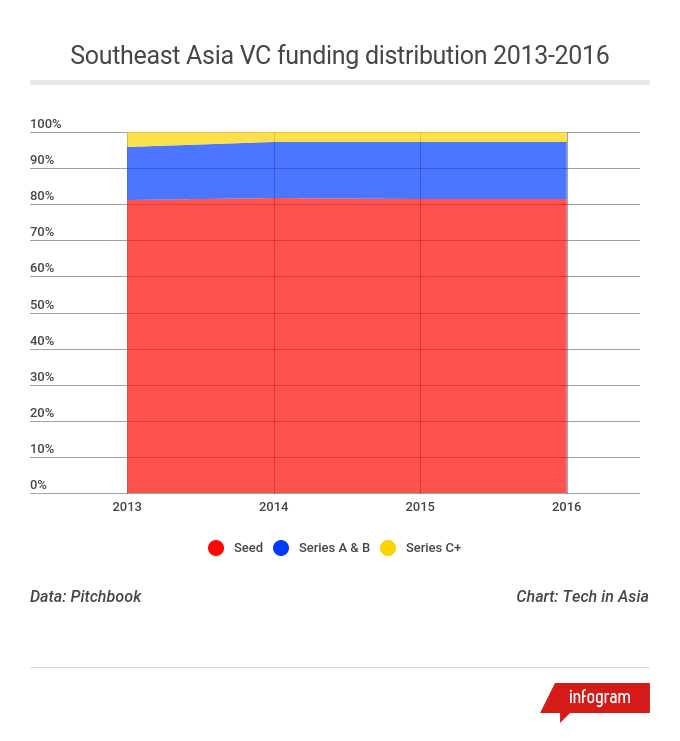 Compare that to the trend in the rest of the world over the same period: 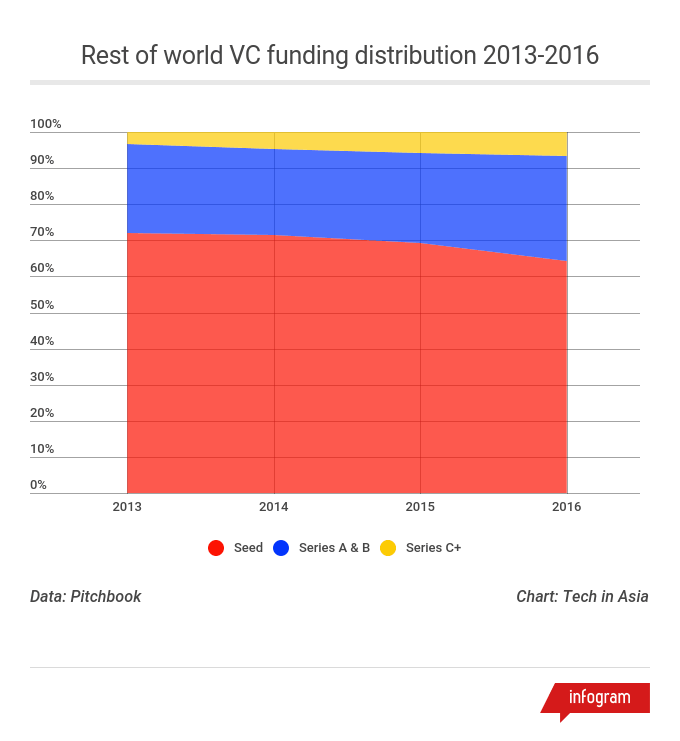 Tech in Asia’s own data tells a similar story. In the first half of 2017, funding for Southeast Asian startups was down overall year-on-year. However, series B rounds saw the most significant drop, with more than 50 percent less funding in terms of dollars invested compared to H1 2016: 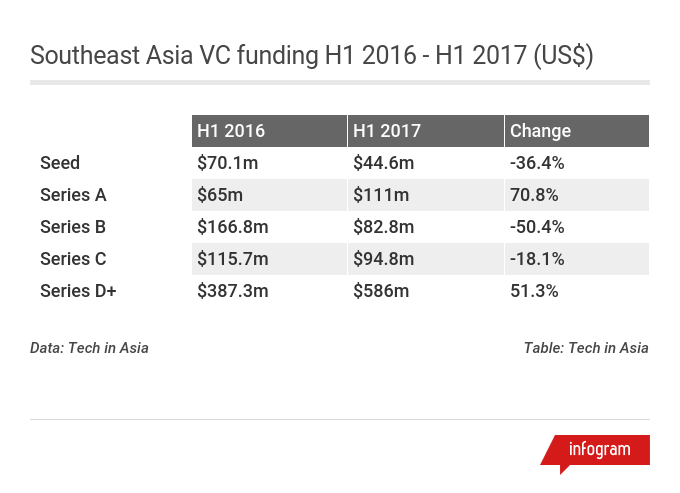 Looking back a little further, the share of VC dollars that have gone to Southeast Asian series B and C rounds over the past three-and-a-half years has typically only just outstripped that of seed and series A rounds, if that. Making allowances for startups that fold before reaching the series B stage, one would nonetheless expect series B and C combined to be taking a greater share of investment than this data indicates. 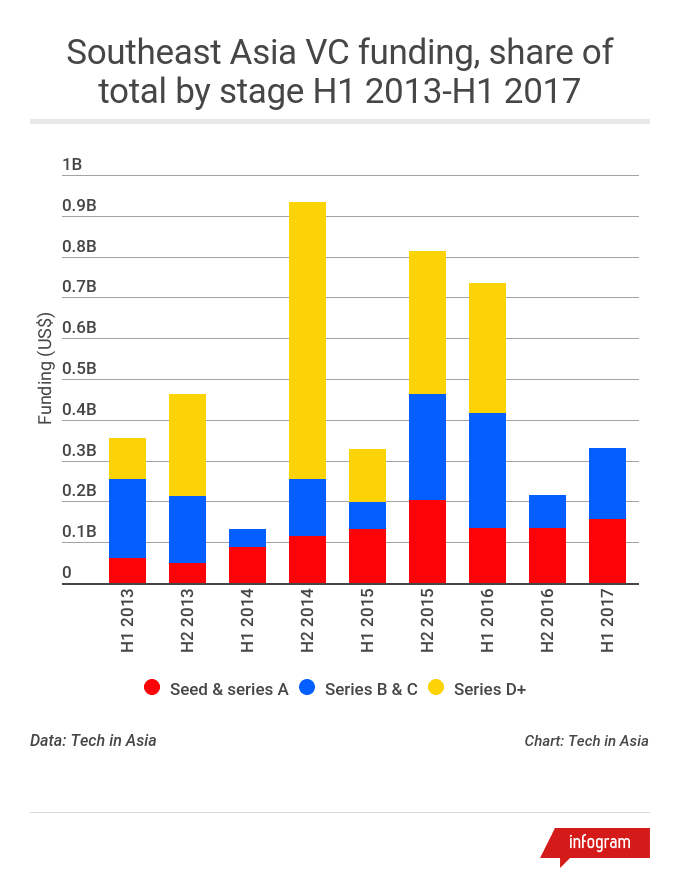 All in all, investors have been keen to put seed money into early-stage startups in the region in recent years. Those businesses that got seed or series A funding in the past few years – and have managed to survive – will now be looking for growth capital to take them onward. Series B is often seen as the hardest round to close – and that seems to be especially true in Southeast Asia at the moment. Much of the funding activity here is attributable to non-VC investors and corporates, like Alibaba, SoftBank, and Tencent. But Gobi’s Meranti fund, and similar efforts from the likes of Venturecraft and others, indicate that some regional VC firms are beginning to change tack.