Apart from its size, the deal shows a broadening of appeal for venture debt – it can be a useful option for later-stage companies too, and not just early stage startups, InnoVen CEO Chin Chao explains to Tech in Asia.

For Yatra, which competes with MakeMyTrip and Cleartrip for booking flights and hotels, this is the second time it is opting for venture debt. InnoVen had provided it with a loan of US$4 million in 2013. Now the US$15.4 million loan comes after an IPO. “After having raised US$92 million through our Nasdaq listing in December 2016, the debt funding provides us additional capital for our growth needs,” says Yatra CFO Alok Vaish.

Venture debt is 25 to 30 times cheaper than equity financing.

InnoVen started in India as an entity of Silicon Valley Bank (SVB) in 2008, and got acquired by Singapore’s state-owned Temasek in a joint venture with UOB in 2014. It has given out 165 loans to 120 startups so far, mostly in India. It expanded to Southeast Asia early last year, and to China a couple of months back.

For Chin Chao, it’s a second coming to venture debt as CEO of InnoVen Singapore and interim CEO of Innoven India. Back in 1998, he was a VC becoming increasingly frustrated with banks refusing to extend debt facilities to his portfolio companies.

Last year, when InnoVen expanded to Southeast Asia, Temasek and UOB brought in Chao to head the Singapore unit. He’s also interim CEO for InnoVen India until a replacement is found for Ajay Hattangadi, who had been with the firm from its SVB days and quit earlier this year to start a rival venture debt firm Alteria Capital.

In an interview with Tech in Asia, Chao shares insights on the venture debt scene which he has observed from way back in 1999. Here are excerpts from the interview:

The value proposition a venture debt firm usually offers is for early stage growth companies to raise working capital without having to dilute equity. Now, with the Yatra deal, it seems like you want to cater to later stage companies. Is there a shift?

What we’re seeing in India is that companies that raised money from us earlier are coming back to us for additional financing requirements. We took a call not to let these opportunities pass us by, so we’re looking at funding larger companies too.

Also, since we’ve already lent money to these companies once or twice earlier, we’re comfortable with the team and business – such as with Yatra.

We’re still focused on the series A and series B stages; that’s our bread and better. But we’re seeing a lot of opportunities to write larger cheque sizes than the usual US$1 million to US$2 million.

Do you offer better terms to later stage companies than early stage startups?

The difference in our mind is not so much the stage of the company. When we get familiar with a company, we’re able to do more in terms of its commercial value. Follow-on loans from us have better terms than the first loan we give the company.

What are the main factors you consider in picking a company to invest in?

The quality of the team is most important to us, and that is true of venture capital as well. We look at the investor base of companies that have raised some amount of funding from VCs. Who’s behind it is pretty important in the way we look at credit. We also take a bit of a call on the sector, but mainly it’s the team and investors.

Which are the sectors that attract you the most?

We’ve invested across sectors in India. One area where we haven’t done much is healthcare, so we’re looking at that a bit more now.

Whatever VCs are investing in, we want to be able to provide loans to companies in those sectors. Most of our transactions have been in ecommerce and marketplaces because those are the sectors that were being funded the most a couple of years ago. There’s usually a lag of one of two years between VC funding and venture debt.

Half of the Yatra funding is from InnoVen India and half from your Singapore unit. What do companies gain from this kind of cross-border funding?

Indian companies often have offshore holding companies. For example, [customer engagement software product company] Capillary has a business in India as well as overseas. It has its headquarters in Singapore to handle its business there as well as in China and the Middle East. InnoVen India lends to Capillary for its working capital needs locally, but can’t lend overseas. So InnoVen Capital Singapore lends to Capillary there.

We can also help startups with their international expansion because we have people on the ground in countries from Indonesia and Singapore to India and China.

What are the typical situations where a startup turns to you for venture debt?

Take a company that raises a US$10 million round. After three months we get a call: the founder says, “I’m experiencing so much growth in the business, much more than I expected. Now I want to expand to new locations, hire new staff, launch a new product, do a marketing campaign… I didn’t budget for that in my equity raise.”

Venture debt is a complement to venture capital and not a replacement.

They could raise more equity but it’s only been a few months since the last round, so they’re not going to get an increase in valuation. That’s why they come to us. So they can take advantage of new growth opportunities, without diluting equity at the old valuation. When it comes time to raise the next round, the metrics are better than otherwise they would be. So they can raise funds at a higher valuation. Thus it allows them to take advantage of opportunities that they had not budgeted for.

It can also be used for an acquisition of a complementary company that was not foreseen and hadn’t budgeted for when they raised the VC funding round.

A third use case is runway extension. Companies usually raise a VC round for a runway of 12-18 months. Venture debt can give them an additional runway of three to six months. Some founders also take it as insurance against running out of funds – a little bit of a buffer. A Singapore company in our portfolio took US$10 million in equity funding, but topped it up with US$2 million in venture debt.

Venture loans are quite common in Silicon Valley – 18 of the top 20 unicorns in the US have taken venture debt as a strategy to avoid diluting equity too early in their lifecycle [see chart below].

These 18 of the top 20 unicorns in the US have used debt to save dilution of equity. Source: Crunchbase.

You started a venture debt firm way back in 1999 in Singapore. Then the company got acquired a couple of years later and the business closed. Now you’re back in this industry. How do you see the scene today as compared to earlier?

Venture debt in Southeast Asia is still at a nascent stage. It hasn’t changed much. When I left the industry, there was no replacement, and when I looked at the scene a couple of years ago, I thought, ‘wow nobody has spotted the opportunity yet.’ When I talk to startups, there’s still the frustration of banks refusing to lend money to them. It’s almost as if I’m replicating what I did 17 years ago.

The biggest change is that the founding teams are so much better than they were years ago. The enthusiasm has always been there, just the talent level has changed drastically.

It’s almost as if I’m replicating what I did 17 years ago.

The big challenge in Southeast Asia is lack of exits. VCs need exits to realize their gain.
But I just need them to survive to be able to pay back the loans. The risk is that companies raise VC funding for 12 to 18 months and some of them shut down without being able to repay our loans. That’s the risk we underwrite, but our default rate of 2 percent on loans is lower than that of banks.

It’s important to see venture debt as a complement to venture capital and not a replacement. Being over-leveraged is not good, just as in your personal finances. We aim for a venture debt to equity financing ratio of one to five, so that companies are not stressed over repayment.

When it’s done right, venture debt can be 25 times cheaper than equity financing. We’ve done an analysis to show how it works out [as seen in the chart below]. 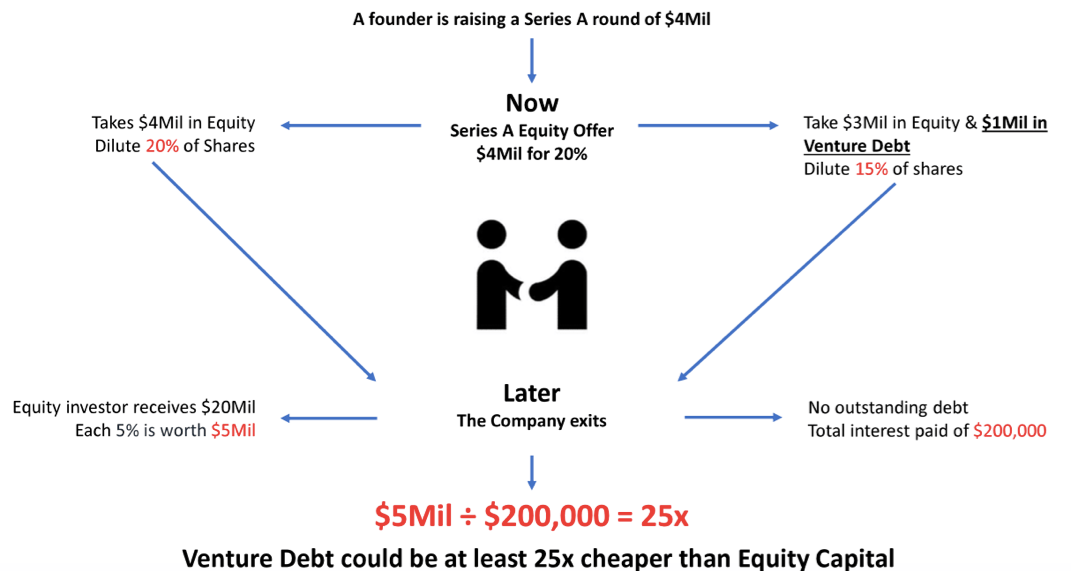 If venture debt is such a growing opportunity across Asian startup ecosystems, why aren’t the banks getting into it?

Most of the banks find it too small a market – 40-50 venture debt deals could amount to US$40 million. That’s like the amount of money in a single property transaction for a bank. A lot of time energy and effort goes into managing loans for startups in so many deals – we’ve been doing one deal a week on average.