Technology doesn’t have to be disposable 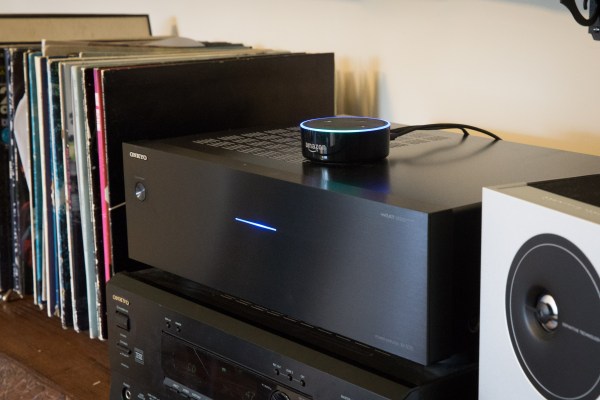 Dust off your old Bose 501 speakers. New devices are coming that will give traditional audio equipment a voice.

Amazon recently announced a mess of new Echo devices and among the lot are several small, diminutive add-ons. These models did not have a smart speaker built into the devices but rather turned other speakers into smart speakers.

Sonos has a similar device. Called the Sonos Amp, the device connects the Sonos service to audio receivers and can drive traditional speakers. There’s a new version coming out in 2019 that adds Alexa and AirPlay 2.

This movement back towards traditional speaker systems could be a boon for audio companies reeling from the explosion of smart speakers. Suddenly, consumers do not have to choose between the ease of use in an inexpensive smart speaker and the vastly superior audio quality of a pair of high-end speakers. Consumers can have voice services and listen to Cake, too.

Echo devices are everywhere in my house. They’re in three bedrooms, my office, our living room, my workshop and outside on the deck. But besides the Tap in the workshop and Echo in the kitchen, every Echo is connected to an amp and speakers. For instance, in my office, I have an Onkyo receiver and standalone Onkyo amp that powers a pair of Definitive Technology bookshelf speakers. The bedrooms have various speakers connected to older A/V receivers. Outside there’s a pair of Yamaha speakers powered by cheap mini-amp. Each system sounds dramatically better than any smart speaker available.

There’s a quiet comfort in building an audio system: To pick out each piece and connect everything; to solder banana clips to speaker wire and ensure the proper power is flowing to each speaker.

The world of consumer electronics survives because of the disposable nature of gadgets. There’s always something better coming soon. Cell phones last a couple of years and TVs last a few years longer. But bookshelf speakers purchased today will still sound great in 20 years.

There’s a thriving secondary market for vintage audio equipment, and unlike old computer equipment, buyers want this gear actually to use it.

If you see a pair of giant Bose speakers at a garage sale, buy them and use them. Look at the prices for used Bose 901 speakers: they’re the cost of three Apple HomePods. Look at ShopGoodwill.com — Goodwill’s fantastic auction site. It’s filled with vintage audio equipment with some pieces going for multiple thousands of dollars. Last year’s smart speakers are on there, too, available for pennies on the dollar.

For the most part, audio equipment will last generations. Speakers can blow and wear out. Amps can get hit by surges and components can randomly fail. It happens, but most of the time, speakers survive.

This is where Amazon and Sonos come in. Besides selling standalone speakers, both companies have products available that adds services to independent speaker systems. A person doesn’t have to ditch their Pioneer stack to gain access to Alexa. They have to plug in a new component, and in the future, if something better is available, that component can be swapped out for something else.

Amazon first introduced this ability in the little Echo Dot. The $50 speaker has a 3.5mm output that makes it easy to add to a speaker system. A $35 version is coming soon that lacks the speaker found in the Dot and features a 3.5mm output. It’s set to be the easiest and cheapest way to add voice services to speakers.

Amazon and Sonos also have higher-end components nearing release. The Amazon Echo Link features digital and discrete audio outputs that should result in improved audio. The Amazon Echo Amp adds an amplifier to power a set of passive speakers directly. Sonos offers something similar in the upcoming Sonos Amp with 125 watts per channel and HDMI to allow it to be connected to a TV.

These add-on products give consumers dramatically more options than a handful of plastic smart speakers.

There are several ways to take advantage of these components. The easiest is to look at powered speakers. These speakers have built-in amplifiers and unlike traditional speakers, plug into an outlet for power. Look at models from Edifier, Klipsch or Yamaha. Buyers just need to connect a few cables to have superior sound to most smart speakers.

Another option is to piece together a component system. Pick any A/V receiver and add a couple of speakers and a subwoofer. This doesn’t have to be expensive. Small $30 amps like from Lepy or Pyle can drive a set of speakers — that’s what I use to drive outdoor speakers. Or, look at Onkyo or Denon A/V surround sound receivers and build a home theater system and throw in an Amazon Echo Link on top. As for speakers Polk, Klipsch, Definitive Technology, KEF, B&W, and many more produce fantastic speakers that will still work years after Amazon stops making Echo devices.

Best of all, both options are modular and allows owners to modify the system overtime. Want to add a turntable? Just plug it in. That’s not possible with a Google Home.

Technology doesn’t have to be disposable.

These add-on products offer the same solution as Roku or Fire TV devices — just plug in this device to add new tricks to old gear. When it gets old, don’t throw out the TV (or in this case speakers), just plug in the latest dongle.

Sure, it’s easy to buy a Google Home Max, and the speaker sounds great, too. For some people, it’s the perfect way to get Spotify in their living space. It’s never been easier to listen to music or NPR.

There are a few great options for smart speakers. The $350 Apple HomePod sounds glorious though Siri lacks a lot of smarts of Alexa or Google Assistant. I love the Echo Dot for its utility and price point, and in a small space, it sounds okay. For my money, the best smart speaker is the Sonos One. It sounds great, is priced right, and Sonos has the best ecosystem available.

I’m excited about Amazon’s Echo and Sub bundle. For $249, buyers get two Echos and the new Echo Sub. The software forces the two Echos to work in stereo while the new subwoofer supplements the low-end. I haven’t heard the system yet, but I expect it to sound as good as the Google Home Max or Apple HomePod and the separate component operation should help the audio fill larger spaces.

Sonos has similar systems available. The fantastic Sonos One speaker can be used as a standalone speaker, part of a multiroom system, or as a surround speaker with other Sonos One speakers and the Sonos Beam audio bar. To me, Sonos is compelling because of their ecosystem and tendency to have a longer product refresh cycle. In the past, Sonos has been much slower to roll out new products but instead added services to existing products. The company seems to respect the owners of its products rather than forcing them to buy new products to gain new abilities.

In the end, though, smart speakers from Apple, Sonos, Google or Amazon will stop working. Eventually, the company will stop supporting the services powering the speakers and owners will throw the speakers in the trash. It’s depressing in the same way Spotify is depressing. Your grandkids are not going to dig through your digital Spotify milk crate. When the service is gone, the playlists are gone.

That’s the draw of component audio equipment. A turntable purchased in the ’70s could still work today. Speakers bought during the first dot-com boom will still pound when the cryptocurrency bubble pops. As for Amazon Alexa and Google Assistant, to me, it makes sense to treat it as another component in a larger system and enjoy it while it lasts.