What standard, exactly, am I supposed to be judging virtual and augmented reality against in 2018? Should I measure it against the sci-fi aspirations that VR and AR companies set years ago and have unsurprisingly failed to meet? Should I estimate how far it remains from mainstream adoption? Or should I stick to comparing 2018 with 2017, when I gave VR a middling C grade and didn’t even talk about AR? Since I just went through the trouble of listing those options, my predictable answer is “all of the above.”

2018 was partly a year of disillusionment. Some prominent AR and VR companies, including Meta, Jaunt, and Starbreeze, either massively downsized or shifted their focus. As the head of CCP Games put it in October, a year after leaving the VR business, “we expected VR to be two to three times as big as it was.”

Magic Leap was a disappointing success

Even the year’s successes sometimes felt underwhelming, like Magic Leap, a ludicrously well-funded AR startup whose pitch was basically “we have recruited the greatest minds in modern culture to literally rewrite reality.” Magic Leap shipped a headset in mid-2018 after years of speculation, and when it turned out to be merely a decent Microsoft HoloLens competitor — which is a genuine achievement! — the disappointment was palpable.

Especially since this is the first year I’ve covered augmented reality, I’m also deducting points for the industry’s increasingly convoluted terminology. Is a given product augmented reality, virtual reality, mixed reality, extended reality, a heads-up display, smart glasses, an immersive computing device, or possibly something else? Here. Have a chart. 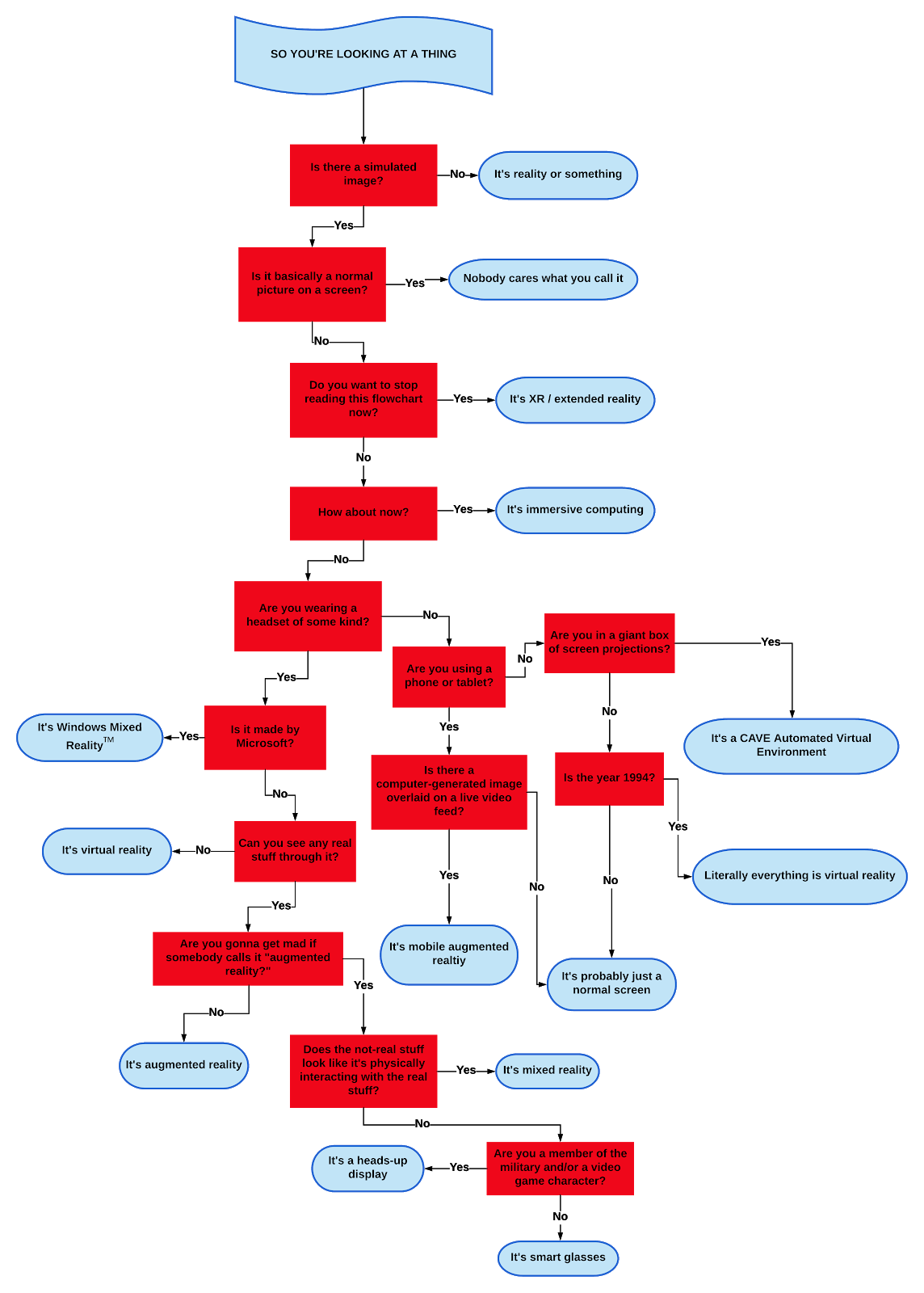 And unlike previous years, we don’t know a lot about the 2019 VR hardware lineup. Oculus announced a self-contained headset called the Oculus Quest, but even there, rumors suggest it scrapped a higher-end device — and its former CEO Brendan Iribe left the company for nebulous reasons.

Augmented reality hardware is overwhelmingly still focused in areas like industry and medicine, where it’s been used for decades. That’s not a bad thing, since it means companies can iterate on headsets in a market that actually exists, instead of trying to simultaneously solve hardware problems and sell users on a whole new kind of product. But it makes AR sort of abstract for most consumers, unless it’s phone-based AR, which is an extremely different experience. (You might want to go check the chart again at this point.)

Hearteningly, though, one of VR’s early long shots may have actually paid off. In 2016, location-based VR entertainment startup The Void seemed like an ambitious but risky project. After getting investment from Disney and launching a Star Wars-themed experience last year, though, it’s opened several new locations and is working with more Disney-owned franchises. It’s just one of many VR arcades and theme parks — although those aren’t all doing great either, since IMAX shut down its VR location-based entertainment experiment in 2018.

While Sony may not have released new VR hardware this year, it published a few PlayStation VR titles that got serious mainstream attention. Dark Souls studio From Software published a short adventure game called Déraciné for the platform, and Tetris Effect had a well-reviewed PSVR mode.

VR still isn’t remotely mainstream, but this was the first year I found myself consistently playing VR games for their own sake, rather than as experiments or ways to stay abreast of coverage. (Well, it was mostly just Beat Saber — which was incidentally my favorite game of the year in any medium.)

And at this point, VR and AR are two of the last major technologies that haven’t faced a huge scandal involving genocide, mass surveillance, election tampering, or the wholesale dissolution of truth. Are there problems? Sure — the VR startup Upload dissolved this year in the wake of a sexual misconduct lawsuit, after apparently losing investment from Oculus Rift inventor Palmer Luckey, who is now busy building controversial “virtual border wall” technology. Microsoft and Magic Leap competed to provide new AR headsets to the military. Meanwhile, the privacy fears around Facebook have raised concerns about how Oculus will surveil its users. But there’s still a potential for optimism that’s hard to find in other parts of the tech world.

It worries me that I’m not sure what’s happening next year in VR. I’ll be watching for a second generation of Microsoft HoloLens, the Oculus Quest, and potentially some products from China, which has a huge VR and AR industry. But we’re nearing the end of the first generation of headsets, and companies haven’t been publicly exhibiting many giant technological leaps that could sweep us into a second one. Meanwhile, AR probably won’t be on most people’s radar at all for years.

So against the longer arc of history, I’m not sure how the past year will look. But hey — at least we got Beat Saber out of it.