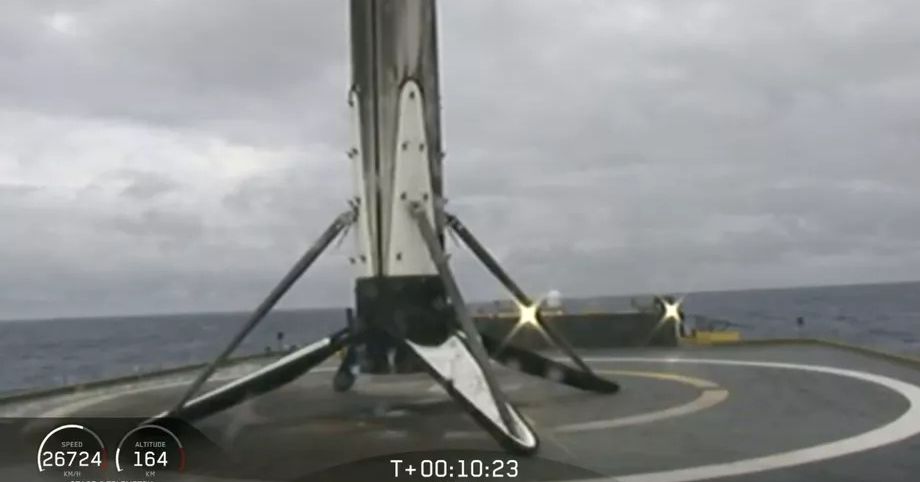 SpaceX successfully landed the center core of its Falcon Heavy rocket on a drone ship last week, but the vehicle accidentally fell into the ocean while in transit to the Florida coast. The company blamed the loss on choppy seas.

“Over the weekend, due to rough sea conditions, SpaceX’s recovery team was unable to secure the center core booster for its return trip to Port Canaveral,” SpaceX said in a statement to The Verge. “As conditions worsened with eight to ten foot swells, the booster began to shift and ultimately was unable to remain upright. While we had hoped to bring the booster back intact, the safety of our team always takes precedence. We do not expect future missions to be impacted.”

“the booster began to shift and ultimately was unable to remain upright.”

The center core is a modified Falcon 9 booster — one of three that make up the Falcon Heavy rocket. This particular core flew on Thursday, April 11th, from Cape Canaveral, Florida, during the second flight of the Falcon Heavy. The flight marked the first time the rocket had flown in over a year since its debut in February 2018, as well as the first commercial mission for the vehicle.

Following takeoff, all three cores of the rocket successfully landed back on Earth: the two outer cores touched down on dual concrete landing pads at the Cape while the center core touched down on the company’s drone ship named Of Course I Still Love You in the Atlantic. It was the first time that SpaceX had pulled off a triple landing. During the Falcon Heavy’s first flight, the outer cores landed just fine, but the center core missed the drone ship entirely and slammed into the ocean.

Now it seems that the ocean once again got the better of the Falcon Heavy center core. SpaceX does have ways to secure the rockets it lands in the ocean, including a robot known as the “octagrabber” that latches on to the base of the boosters. But because the center core connects to two side boosters, it has a different design than a normal Falcon 9 booster. So the octagrabber cannot hold on to it in the same way.

SpaceX has another Falcon Heavy mission coming up sometime this summer in Florida, one that will use an entirely new center core and the two outer cores that landed last week. SpaceX does plan to use the octagrabber for that mission. Perhaps the company has some time to update the robot to hold onto the center core, or perhaps calmer seas will be more conducive to transporting rockets.