A web art exhibit forces visitors to confront the past

Saved emails, Geocities pages, an emulation of Windows 98. These are all parts of the deleted web — the web that can’t be easily accessed anymore. And they’re all part of a museum exhibition called “The Art Happens Here: Net Art Anthology,” currently showing at the New Museum.

The name of the exhibition, “The Art Happens Here,” comes from a 1997 diagram by an artist duo named MTAA, depicting a lightning symbol in between two computers and an arrow pointing to it saying, “The art happens here.” “They wanted to show people that the artwork wasn’t something shown on a screen but it was more about an encounter they were having with other users,” Rhizome’s artistic director, Michael Connor tells The Verge, “There’s no object. The whole idea of a net art is based on things coming together in this live way.”

“The Art Happens Here” suggests that web archives can also be art. Different artifacts of the web from diverse cultures, circumstances, and pockets of the internet are salvaged in the exhibit.But while creating art, many of these artists have left raw commentary about extremely important historical events. For example, there’s a Miao Ying’s Blind Spot, a Chinese dictionary with 2,000 terms whited out, which reflects terms that would come back censored when you tried to search for them on Google in China in 2007. 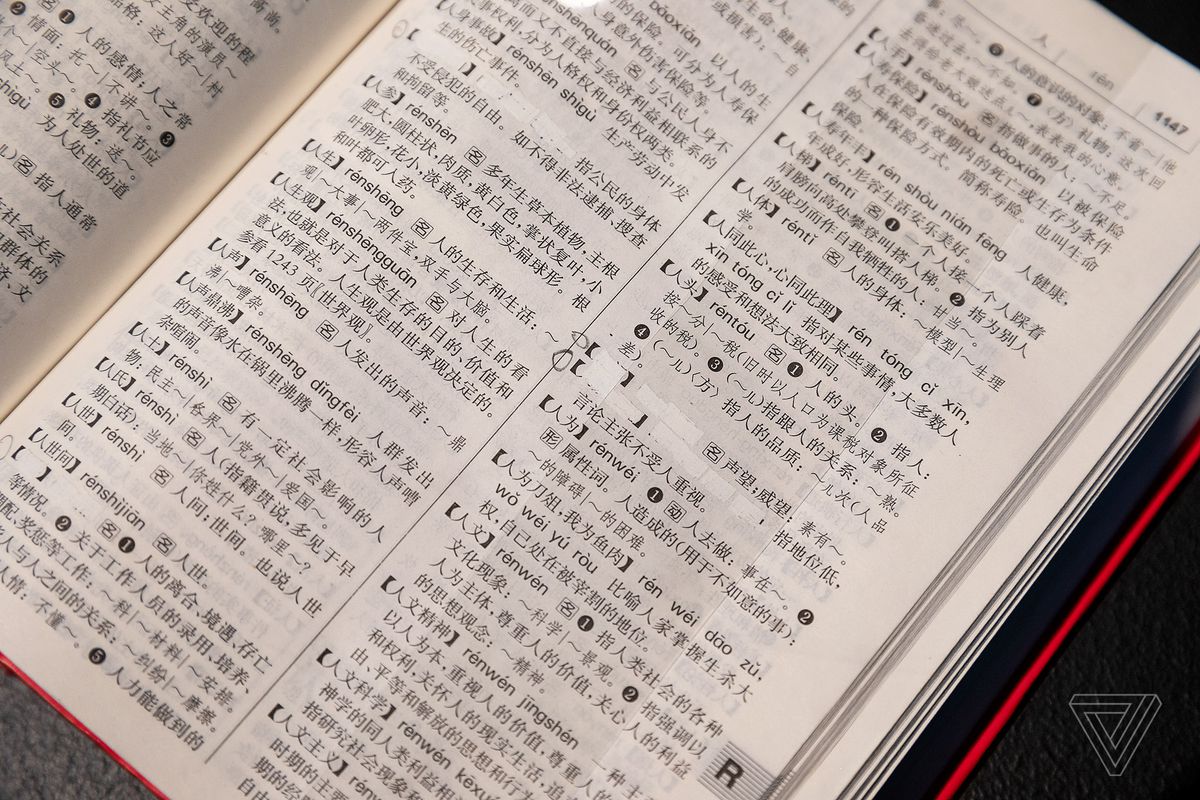 In an interview with Rhizome, the digital art organization behind “The Art Happens Here,” Miao explains she was inspired to call awareness to censorship in China because “people in China don’t realize what censorship is; to them it’s just a note on the bottom of the page.” But at the same time, those whited out terms in her dictionary remain hidden to museum visitors. They’re also not translated, so English-only visitors will be out of luck.

The issues Miao raises in her exhibit have also shown up on the news quite recently: many Chinese Twitter users have vanished from the platform after a police crackdown over the past half-year. Some have been detained for posting on the platform, which is blocked on China. Others have mourned the disappearance and sometimes self-censorship of important voices on the platform, some which have served as well-needed social commentary for a country closed to criticism.

“Artwork was more about an encounter people were having with other users.”

Access comes up again and again as a question in the exhibit. In Morehshin Allahyari’s The Distributed Monument, Material Speculation: ISIS, real life artifacts from Iraq that were destroyed by ISIS in 2015 are remade as 3D-printed models. Originally, Allahyari displayed all of these models, but soon realized that they were only being shown to onlookers in the West and not for their original, intended audience, eerily echoing how Western museums have historically displayed artifacts from around the world that were stolen or plundered during colonialism. It was an uncomfortable association for Allahyari, so she ultimately withdrew most of the models except for one, according to Connor. There’s an SD card with all of the data for the models inside that she has sealed within the one model that remains on display. 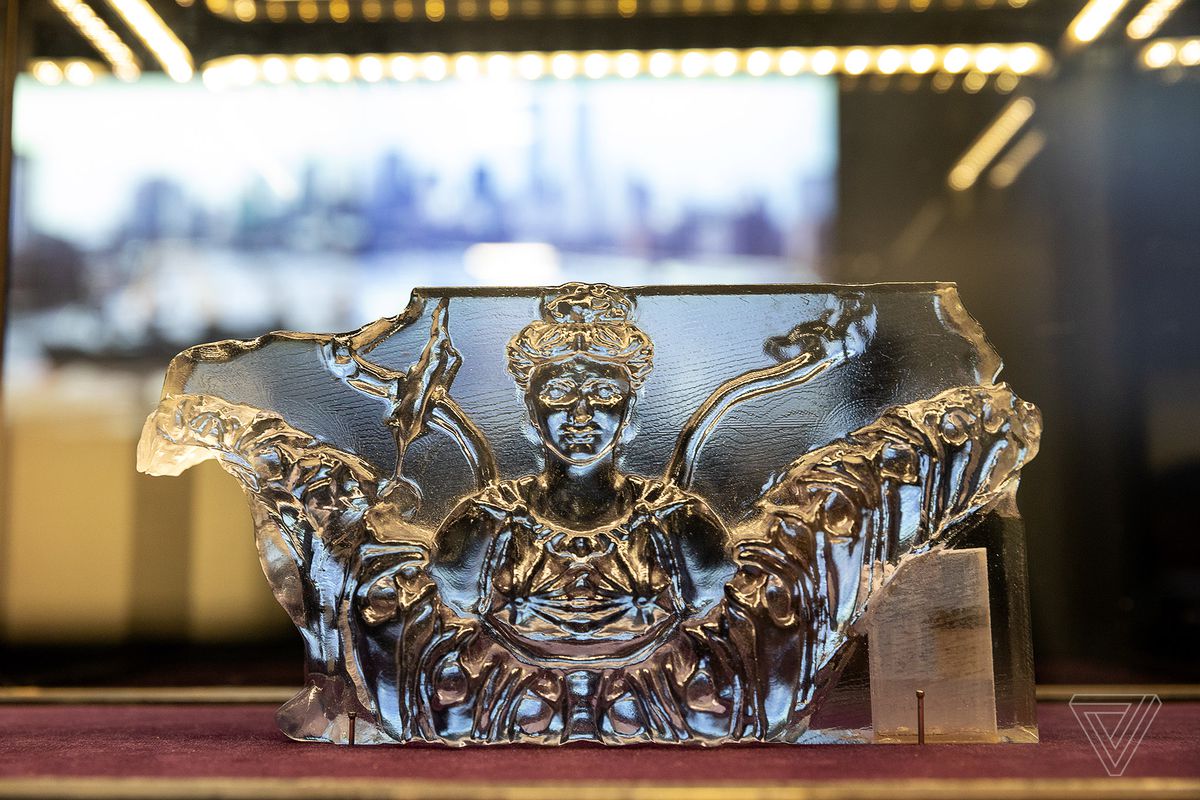 Archives help preserve a sense of what was lost. “How can we acknowledge what is lost?” asks Connor, who highlights internet art as an exploration of this question and others. “The Art Happens Here” also acknowledges other tragedies in our history: the September 11 attacks in New York and the Holocaust in Nazi Germany. These works of art are hidden deeper inside “The Art Happens Here,” but they get at the heart of what’s being explored here. Wolfgang Staehle’s Untitled from 2001 is a webcast of lower Manhattan skyline during the September 11 attacks. Staehle had originally set up three webcasts, one in New York, one in Berlin, and one in the Comburg Benedictine monastery in Germany. The blurry footage was composed of still images that updated every three seconds. He had intended the exhibit to explore “what happens when nothing happens,” he told Rhizome, but once planes crashed into the World Trade Center’s towers, his art was transformed into a documentary of the senseless violence.

The artist duo YoHa, Graham Harwood and Matsuko Yokokoji, produced the exhibit Lungs in 2005, which takes Nazi data that was collected at the time through IBM’s technology and turns it into a software poem memorial. The data supplied information about some of the 4,500 slave laborers who worked at a munitions factory during World War II.

YoHa wrote an app that could count the workers’ total lung capacity and then play the sounds of the artists’ breathing to illustrate how much breath that added up to. The exhibit was a way to humanize the hard data. Harwood said in a 2010 interview that he was interested in “exploring IBM’s relationship to such conditions in helping the Nazis to process the slave laborers.” The questions raised by YoHa are still relevant years later.

“The Art Happens Here” goes on until May 26th. The New Museum in New York City is closed on Mondays and is pay-what-you-wish on Thursday evenings.