A Memory Called Empire is a brilliant blend of cyberpunk, space opera, and political thriller

In Arkady Martine’s debut novel, A Memory Called Empire, Ambassador Mahit Dzmare, an emissary from the distant Lsel Station, is called to the center of the vast Teixcalaanli Empire after her predecessor winds up dead. As she begins to understand the ins and outs of her new role, she also has to figure out how to keep her home station from being absorbed into the Empire, and what happened to her predecessor. Author Martine lays out a fantastic look at how a society’s memory steers cultural and political events, and offers a meditation on the lengths people will go to be free.

The novel is set in the very distant future: humanity has spread throughout the stars, traveling from system to system by way of a stargate-style network. That’s allowed the Teixcalaanli Empire — a hungry, expansion-minded society — to spread its influence throughout inhabited space, its culture and knowledge stretching from system to system. Mahit Dzmare is the ultimate fish-out-of-water when she’s abruptly assigned to replace Ambassador Yskandr Aghavn, who perished in the empire’s capital city. Her home, a self-sustaining habitat, has remained free of the empire’s oversight, something of paramount importance to the inhabitants of Lsel station. She’s seen as a barbarian by the cultured Teixcalaanlis, who view everything from her speech to her station’s burial practices as backwards and outdated.

Unbeknownst to the Teixcalaanlis, the inhabitants of Lsel Station have a particularly advanced technology at their disposal: an Imago, a thumb-sized device implanted in their brainstem that essentially grafts a digital persona into their mind. Think Altered Carbon’s cortical stacks: these devices copy a person’s personality and memories, and exist alongside their host. As Mahit describes it, it’s a technology that allows Lsel Station to pass critical knowledge to future generations of its sparse population. The Imagos are a closely held secret, a critical technology, and mental enhancement that would be seen by the Teixcalaanlis as another example of barbarism. 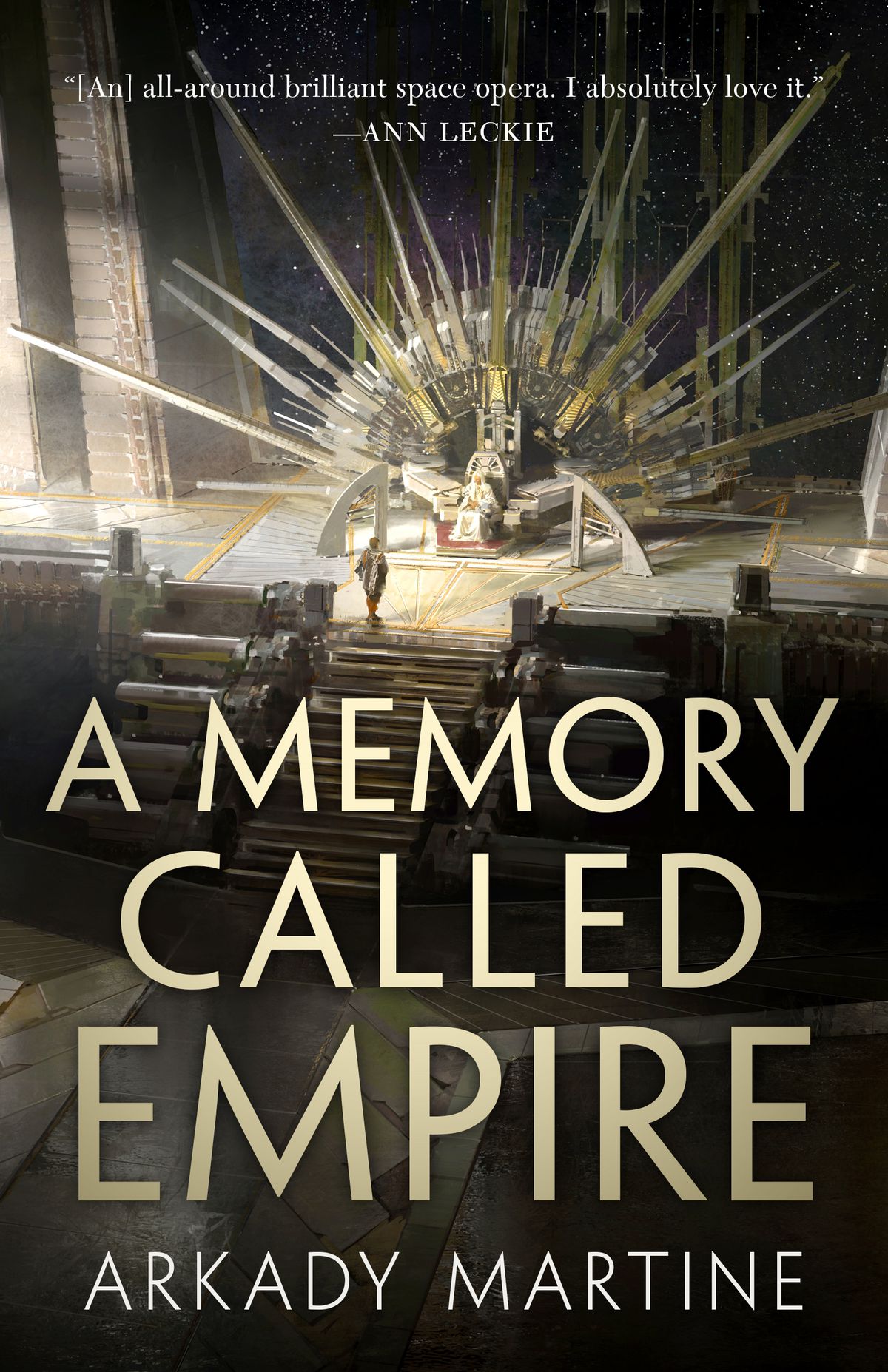 Mahit faces a major problem: Yskandr died in the capital city, and had been out of touch from Lsel Station for 15 years; as a result, her own Imago — a copy of Yskandr’s personality and memories — is a decade and a half out of date. So while Mahit has trained for years to understand Teixcalaanli’s language and culture, she finds herself in the midst of a tense situation: her predecessor dead and likely murdered, a battle for succession of the imperial throne brewing, and Yskandr — her out-of-date Yskandr — has suddenly vanished from her mind, leaving her without a crucial guide, save for her Teixcalaanli-assigned assistant, Three Seagrass.

The combination of politics, cyberpunk, and epic space opera makes for a gripping read

That setup is the start to a stunning story that impressively blends together Martine’s fantastic and immersive world, a combination political thriller, cyberpunk yarn, and epic space opera that together make up a gripping read. Mahit’s situation is the perfect introduction to an unfamiliar world, as Martine moves her through the gilded halls of the Teixcalaanli capitol, meeting the politicians she’s been sent to interact with, the fantastical technologies installed in the city, and the poetry that represents the pinnacle of high culture for the empire. Three Seagrass, her devoted aide-de-camp, acts as a sort of cultural interface who brings her up to speed on her surroundings, and guides her as she moves around the city.

When Mahit goes to meet Yskandr’s original assistant, she discovers a bigger plot — and an assassin’s bomb that reveals that there’s more to her predecessor’s death than was originally reported. This leads her down a path to the heart of the Empire’s expansionist ambitions, where the technology in her head might be a critical bargaining chip for the aging Teixcalaanli emperor.

Martine’s book speeds along steadily as Mahit goes further down the rabbit hole of Teixcalaanli politics, and the plot unspools marvelously alongside each revelation about the empire’s culture and society. I’ve picked up similar space opera-type novels in recent years that I’ve largely bounced off of because their characters feel like they’re being used by their authors to sit in rooms and talk at one another, playing out political thought experiments while not much happens. There are certainly a lot of characters who sit in rooms and talk to one another about local politics here, but A Memory Called Empire feels like it does a better job weaving in all of those various elements: Teixcalaanli culture and world building, Lsel’s technology and its stance in the world, and Mahit and Three Seagrass’ relationship as a pair of genuinely interesting characters.

Martine drew some inspiration from the Byzantine Empire

In fact, as Dr. AnnaLinden Weller (her real name), Martine is a scholar of the Byzantine Empire, and she noted in an interview in Strange Horizons that much of the novel is inspired by her own work on how that real-world empire interacted with its neighbors. It’s a meditation on how empires — real-world and fictional ones — expand and annex their surroundings. The Teixcalaanli Empire’s influence goes beyond just the warships that she mentions in passing — it’s the empire’s cultural exports that threaten to overwhelm the local cultures that it seeks to dominate.

At the crux of the book is the idea of how an institutional memory helps guide society. The Teixcalaanli have a vast history of poetry, histories, and their own versions of pulp space operas, while the inhabitants of Lsel Station have their own technologies for keeping knowledge around. At the heart of both societies is the same goal: keeping one’s identity intact for future generations so that their legacy moves forward generation after generation. A Memory Called Empire explores the good and the bad of that — bad, in that an expansionist, colonial-minded entity like the Teixcalaanli threaten to overwhelm their neighbors and replace their cultures with their own. But it’s good when you’re fighting for the very survival of your people. Martine threads a delicate needle through both arguments as the plot unfurls, showing off the complex facets where politics and identity mix.

As such, it’s an excellent, gripping novel with a brisk plot, outstanding characters, and plenty to think about long after it’s over.