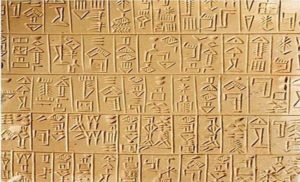 It is estimated that approximately 31,000 languages have been spoken throughout the entire history. Most of them have been extinct for a long time.

By decoding the ancient languages, one can gain a deeper insight into understanding the socio-political and cultural life of the past (and how it impacts our present day).

A joint team of researchers from MIT’s Computer Science and Artificial Intelligence Lab have developed a new AI project called the Google Brain. It works using an algorithm that matches words of unknown languages with related words, in languages that share the same root.

For this, the system has been trained on four decisive properties that are related to the context of the characters to be deciphered such as:–

As of now, the AI system has been trained to decipher ancient languages such as Linear B (a earlier version of Greek) and Ugaritic (an extinct Syrian language).

In December 2018, Émilie Pagé-Perron, researcher in Assyriology, University of Toronto, used machine learning to translate 69,000 Mesopotamian administrative records from the 21st Century BC.

She stated that even though a lot of information has been discovered through archaeological exacavations and analysis, a certain aspect of the lives of Mesopotamian people is still missing. This can only be explored by translating ancient texts about that period’s economics and politics.

Jacob Dahl, professor of Assyriology, University of Oxford, said that while they have thousands of tablets and seals from Mesopotamia than from Greece, Rome and ancient Egypt altogether, only 10 percent of them have been deciphered. This is mainly due to lack of enough experts who can study and read them.

Thus, the recently developed technology comes as a sign of relief for researchers involved in making similar discoveries and might prove to be the next big thing in uncovering the biggest secrets of humanity’s past.