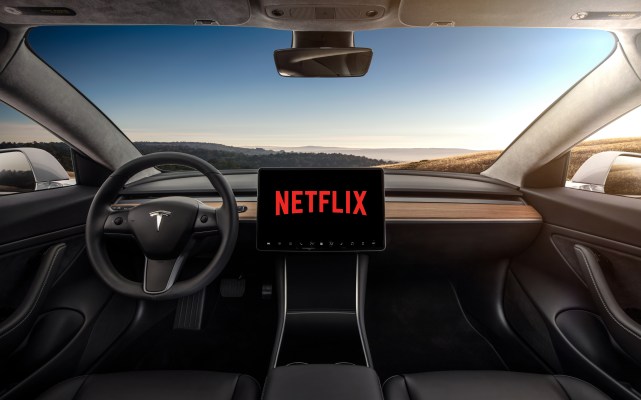 Tesla is getting ready to “soon” deliver the in-car video streaming services that CEO Elon Musk suggested would eventually come to the automaker’s cars. Musk shared this (somewhat vague) updated timeline on Twitter over the weekend, after noting earlier in June at E3 that Tesla’s infotainment displays would eventually be getting YouTube and streaming video support.

This is also the first time Musk has specifically said that both YouTube and Netflix would be coming, after previously noting that version 10 of the in-car software would support video streaming generally in reply to a question from a fan on Twitter. Musk added that these would be available to stream video only while the vehicle is stopped — but the plan is to change that once full self-driving becomes a reality.

Once full autonomous driving capabilities are “approved by regulators,” Musk said, the plan is to turn on the ability to stream video in the vehicle while it’s in motion. This plan likely extends to Tesla’s in-car gaming features, too — though that’s a separate level of distraction as you’re actually interacting with what’s happening on the screen, which may not be the best idea for initial roll-out of autonomous features where a driver might be required to take over manual control in case of any incidents.

The Tesla CEO said the experience of watching video on Netflix and YouTube in a Tesla vehicle is akin to “an old-school drive-in movie experience, but with much better sound” and that it has an “immersive, cinematic feel” thanks to the surround audio available via the Tesla’s audio system and its “comfy seats.”

It may seem like a weird software update priority for a car, but it’s entirely possible Tesla owners spent so much on their vehicles that they don’t have spare cash for a fixed address, in which case an entertainment system for their tiny apartment actually makes a lot of sense.