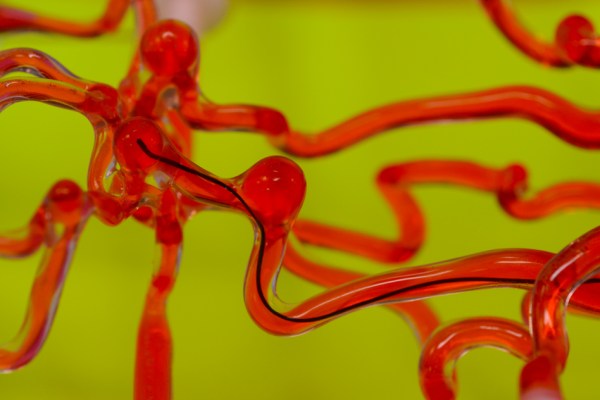 MIT has developed robotic thread that could make existing the least invasive current brain surgery techniques even less so, and potentially make it easier and more accessible to treat brain blood vessel issues like blockages and lesions than can cause aneurysms and strokes.

The new development from MIT researchers combines robotics with current endovascular (ie. within blood vessel) surgery techniques, reducing the risks associated with guiding incredibly thin wires through complicated brain blood vessel pathways. Today, this type of procedure, which is much less invasive than past methods of brain surgery, nonetheless requires an incredibly skilled surgeon to guide the wire manually. It’s a very diffucl surgery for surgeons, and it also means that they’re exposed to radiation from the X-rays required to provide a view of the path they’re weaving through the patient’s brain.

These ‘robot-threads’ developed by MIT takes research done on so-called ‘hydrogels,’ which are materials made mostly of water that work well within the human body. At the thread’s core is a material called ‘nitinol’ that can bend, and is springy, meaning it has a natural tendency to spring back to its original shape when bent.

The material is coated in an ink-like substance, which is then bonded with a hydrogel, regulating in a magnetically manipulable material that can still surviving within the human body. Using a large magnet, the researchers could then steer the thread through a demonstration obstacle course they built to show off how it could work in a surgical situation.

MIT’s researchers also note that you can modify the core construction of the robot threads with other materials to serve different functions, and showed this by replacing the nitinol at its centre with a fiber optic filament, which in practice could be used to transmit laser light to blast away a blockage in a brain blood vessel.

The tech could be put to use to make it so that surgeons can operate the threads from a safe distance – or even remotely. This would not only be safer for the doctors, but could also open up more access to this highly specialized kind of surgery for patients, too.