Astronomers have almost certainly detected a second interstellar comet zooming through our Solar System, but there’s still quite a lot of work to be done to find out more about this alien space rock. In the weeks and months to come, astronomers will continue to observe this visitor with as many ground and space-based telescopes as possible to determine if it is, indeed, interstellar and figure out where it came from.

An amateur astronomer, Gennady Borisov, first spotted this object on August 30th with his own telescope in Crimea. At the time, it wasn’t immediately clear that the object — named C/2019 Q4 — wasn’t from around here. As time has passed and more people looked at this thing, they’ve realized that the path that C/2019 Q4 is on does not loop around the Sun. Additionally, it’s going super fast: about 93,000 miles per hour (150,000 kilometers per hour), which is faster than any object from the outer fringes of our neighborhood would be traveling. As NASA and an international team of experts announced last week, the signs all point to it passing through our Solar System on its way from some distant origin.

“Everyone is waiting with bated breath for another batch of data to come in.”

The astronomy community hasn’t officially confirmed that C/2019 Q4 is interstellar yet, though everyone is nearly certain about its status. “After getting enough data, I suspect we’ll be assigning a permanent designation to say this object is interstellar,” Davide Farnocchia, who is studying the comet at NASA’s Center for Near-Earth Object Studies at JPL, tells The Verge. “But basically, there’s no doubt from the trajectory that it is interstellar.” The good news is that if this comet is truly from outside our Solar System, we caught it at a great time — when it was moving on its way in toward us, rather than on its way out. That means astronomers will have more than a year to continue observing this thing, allowing them to potentially refine its trajectory or even tell us what this mysterious rock is made of.

“I’m sure there will continue to be active orbit updating,” Michele Bannister, a planetary astronomer at Queen’s University Belfast, tells The Verge. “Everyone is waiting with bated breath for another batch of data to come in.”

Up until very recently, astronomers had never spotted an interstellar comet, despite the fact that these extrasolar objects are thought to visit our Solar System all the time. They’re usually just moving too fast and are too faint to be seen by telescopes here on Earth. 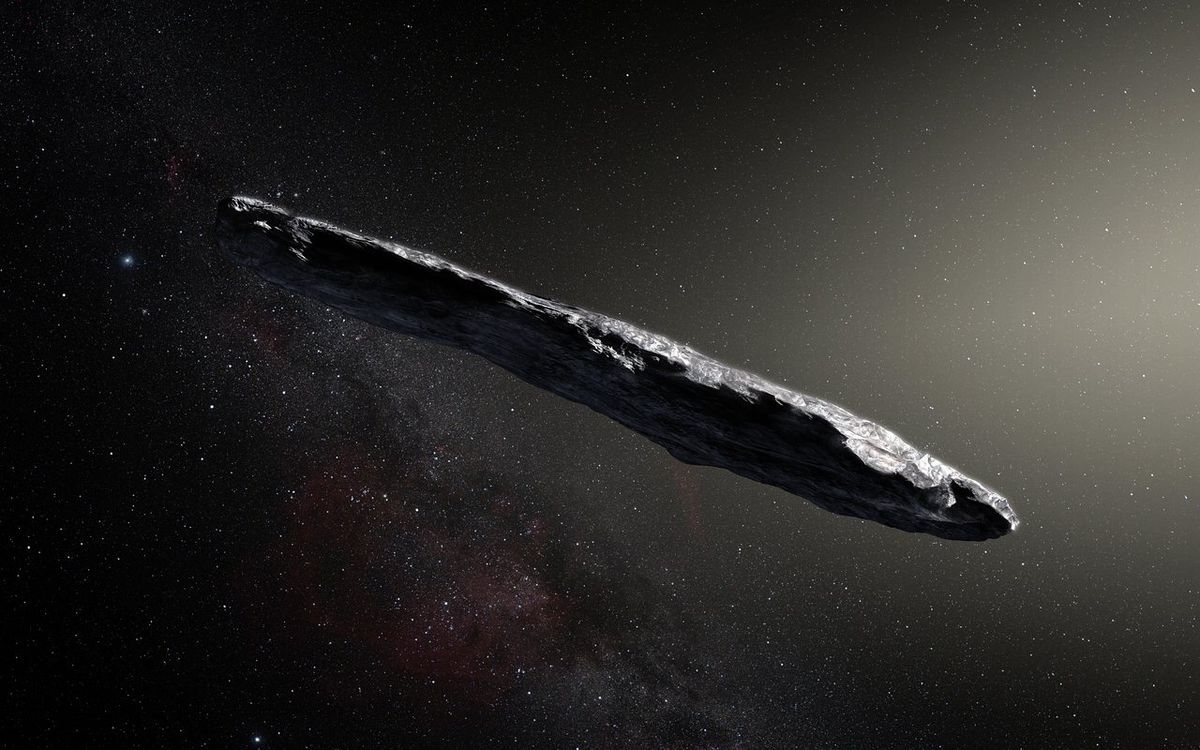 Then in 2017, a telescope in Hawaii detected what many considered to be the first observed interstellar space rock, which was eventually named `Oumuamua. Unfortunately, astronomers spotted `Oumuamua while it was on its way out of the Solar System, so the only time researchers could observe it was when it was hurtling away from Earth at breakneck speeds. Just a few months after it was found, it became too faint to see anymore. The scant information we were able to glean from watching `Oumuamua was tantalizing but also baffling. For one thing, it didn’t exactly exhibit comet behavior, which led to some wild theories that it may not have been a rock at all (though it most likely is a rock).

With C/2019 Q4, it’s a completely different story. The comet will make its closest approaches to both Earth and the Sun in December of this year before it starts heading away from us and diminishing in brightness. Sadly, C/2019 Q4 won’t get as close to us as `Oumuamua got during its visit. But astronomers expect it will still be relatively bright until April of next year, and that they’ll be able to observe it until October 2020.

And unlike `Oumuamua, there is really no doubt that this object is truly a comet. The first pictures taken of the object by the Gemini Observatory in Hawaii reveal a very average comet-looking rock. It’s sporting the gaseous atmosphere and iconic tail that most comets have, which is created when all the ice and volatile materials within the rock get heated up by the Sun and turn into gas.

“how much does it look like the ones that we see from our Solar System?”

Now, scientists want to know exactly what’s in that gas as well as what’s in the rock itself. By looking at the light from this object, scientists will eventually be able to say how much of certain types of gases and materials are present in and around C/2019 Q4. And then they’ll compare those types of materials to the one found in comets we’ve observed before. “I think that’s going to be one of the driving issues with this comet: how much does it look like the ones that we see from our Solar System?” Karl Battams, an astrophysicist at the Naval Research Laboratory who works on the Sungrazer Project to discover comets, tells The Verge.

The comets in our Solar System are thought to have remained relatively unchanged since they first formed during the birth of the planets. That means they provide a snapshot of the materials that were present when the Solar System first came into being. A comet from another planetary system could also serve as a baby picture for another distant cosmic neighborhood.

“If it turns out that this comet is really similar to what we find in our system, maybe that tells us a lot about how planetesimal formation tends to work in planetary systems,” says Bannister. “But my guess is it’s probably going to be different. That would be more fun.”

Researchers are also continuing to refine the object’s trajectory. Right now, the International Astronomical Union has given C/2019 Q4 a provisional designation as an interstellar comet. But everyone expects a permanent designation to come soon. “The orbit continues to be interstellar basically, and there’s no reasonable way that that would change at this point,” says Battams.

Refining the orbit will help astronomers predict with more certainty where the comet will be in the coming months. And eventually, they might be able to narrow down potential home systems for this rock. “I mean, what would be amazing is at some point, we could figure out, ‘Oh, it looks like it came from this specific star system,’ says Battams. “I don’t know if we would be able to get an orbit that unambiguously points to a single star system, but that would be the ultimate goal.”

For now, C/2019 Q4 will continue to be a very popular target, with many astronomers requesting time on powerful telescopes to observe the object over the months ahead. It’s not every day we get a visit from another star system, which makes C/2019 Q4 a planetary celebrity for 2019 and 2020. “We are actually getting a sample from another system coming to us, and that’s such a unique opportunity,” Farnocchia says. “We only had one so far; this is the second. And so we want to understand as much as we can.”