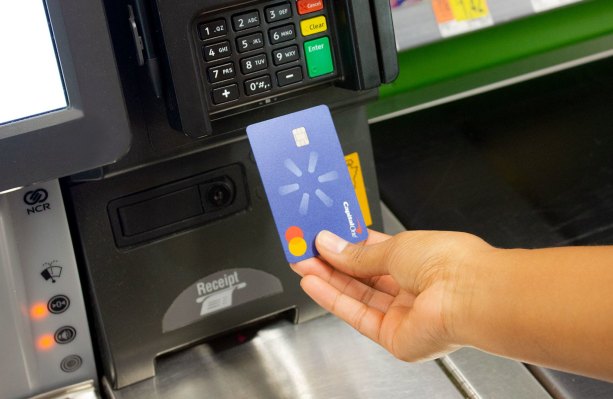 Walmart is partnering with Capital One to launch a new credit card program, which rolls on September 24, and includes both co-branded and private-label cards. The former, the Capital One Walmart Mastercard, includes 5% back on purchases made on Walmart.com or paid for in-store using Walmart Pay (the latter for the first 12 months.) The private label card, the Walmart Rewards Card, will offer those same perks, but is limited to being used only in Walmart stores and on Walmart.com.

After the 12-month introductory period, the co-branded Mastercard will drop to 2% on Walmart purchases in stores, instead of 5%. However, it will continue to offer 5% on Walmart.com purchases, including Walmart Grocery.

It also offers 2% back on restaurants and travel and 1% back everywhere else. The card doesn’t include any annual fee or foreign transaction feeds, and its rewards can be used any time, Walmart says.

Customers can apply for the new card via Walmart’s website or app, or through CapitalOne.com. The application itself can be filled out using a mobile device and, once approved, customers gain access to the card immediately. They can also load the card into Walmart Pay or into the Walmart app before the physical card arrives in the mail — similar to how Apple’s new Apple Card works.

Through Capital One, customers will receive purchase notifications, security alerts, 0% fraud liability, and the ability to lock/unlock a lost or stolen card from the Capital One app.

The new Walmart store card, meanwhile, also offers 5% back on purchases on Walmart.com, in Walmart app, and on Walmart Pay in-store purchases during the introductory period. It then offers 2% back on Walmart purchases afterward. It also earns 2% back at Walmart Fuel Stations.

Current Walmart cardholders will be converted to the Capital One Walmart Rewards Mastercard or the Walmart Rewards Card, starting October 11, with physical cards arriving in November. They’ll also earn 5% back through Walmart Pay through October 14, 2020.

“The Capital One Walmart Rewards Mastercard is definitely helping to cement 5% back as the gold standard among retail cards. We already see this rewards rate with the Amazon Prime Rewards Visa card and the Target REDcard. The previous Walmart card issued by Synchrony Bank only offered 3% back on Walmart.com and a paltry 1% back in-store, so the new card is a huge step up,” she said.

Credit card partnerships are an area of importance to major retailers, including Walmart’s chief rival, Amazon. Its credit card program includes a variety of options, including store cards, travel cards, prepaid cards, no annual fee cards, reward points cards and more. And of course both retailers today are, to some extent, challenged by Apple, which just entered the credit card space, too.

Branded store cards not only help to increase customer loyalty, they also drive more purchases, reduce credit card processing fees, create additional profit in the form of interest, and generate records of customer purchases that can be used for targeted advertising.

“As our company has evolved to serve customers shopping in stores, online, and on the Walmart apps, we also recognized the need to fully digitally enable the cardholder experience,” said Daniel Eckert, senior vice president, Walmart services and digital acceleration, in a statement. “That’s why we’ve worked with Capital One to make it possible for cardholders to manage essentially every interaction with the program right from the palm of their hands,” he said.