This week, the lights went out for hundreds of thousands of residents in San Francisco’s Bay Area — the most widespread intentional outages in California history — on the say-so of utility company Pacific Gas & Electric. PG&E, which is facing billions in lawsuits from previous fires, cut the power to avoid another blaze as well as the expensive lawsuits that come with wildfires, some experts say.

These outages are likely to be the new normal for California, at least for the near future. Some critics say the PG&E outages are excessive and that it’s the bankrupt company’s poor maintenance of its equipment and the fear of litigation that’s really behind its decision to power down.

the new normal for California

Outages like the one California experienced this week — which threatened as many as 800,000 customers, or at least 2 million people, since a “customer” might be an apartment building — aren’t just an inconvenience. For people who rely on medical equipment that requires power, an outage can be life-threatening. More than 32,000 of PG&E’s customers facing blackouts have special energy needs because of medical conditions. And people with limited incomes may not be able to buy food to replace the stuff that rots in their unpowered fridges.

PG&E’s northern and central California blackout zones stretch across more than half of all the counties in California from Humboldt down to Silicon Valley and Kern County. Santa Clara County, home of Silicon Valley, declared a state of emergency. Silicon Valley has been largely spared from the cutoff, though, as PG&E has targeted the kinds of wires that deliver power to homes, rather than big business complexes. Closer to Los Angeles, Southern California Edison has warned that more than 173,000 customers could also lose power this week.

The cumulative costs of the outages on PG&E’s residential customers could reach $65 million, according to estimates from Michael Wara, director of the energy and climate program at the Stanford Woods Institute. Add in the losses to commercial and industrial customers, and the cost could balloon to $2.5 billion.

“They are relying on the shut off to prevent liability. But why should they then shift all these costs to everybody else?” says Mark Toney, executive director of consumer advocacy group The Utility Reform Network. He says the shutoffs show the company’s lack of confidence in what it’s done to maintain its equipment and trim manage nearby sources of fuel, like dried-out plants that could cause a fire hazard.

the cost could balloon to $2.5 billion

In January, PG&E filed for bankruptcy; it faced tens of billions of dollars’ worth of lawsuits from previous fires. California investigators found in May that PG&E power lines were responsible for the 2018 Camp Fire that fire virtually wiped out the town of Paradise, killing 86 people.

“All those factors together mean that PG&E is extremely careful now, to try to take preemptive action,” says Barton Thompson, Jr., a professor of natural resources law at Stanford Law School. “Obviously PG&E is is particularly attuned to the need to take action. Part of that is wildfires, part of it is simply public scrutiny and prior public criticism.” 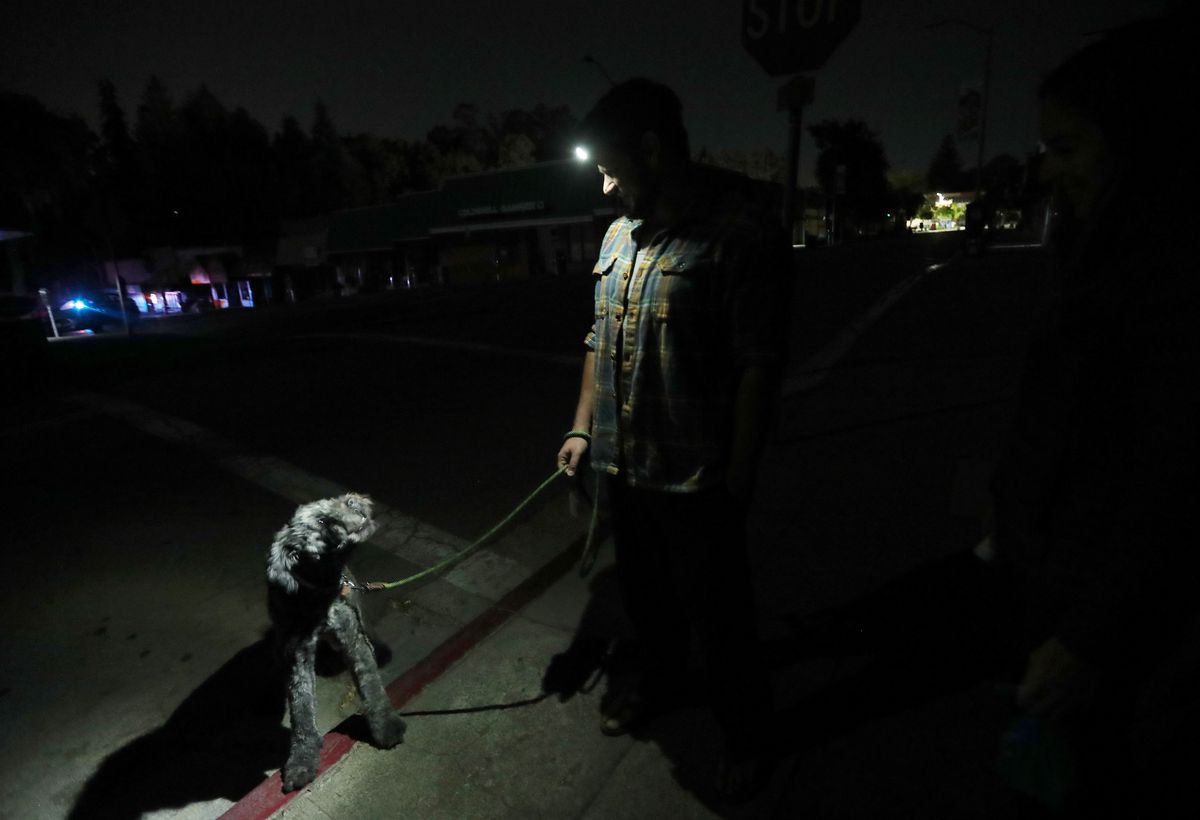 Tony (center) and Lauren Scherba walk their dog Gandalph minutes after the power went out in the Montclair District of Oakland, California.Photo by Jane Tyska / MediaNews Group / The Mercury News via Getty Images

PG&E’s creaky grid is straining at the same time that climate change is fueling fiercer fires. California is getting hotter and drier, and that means more dead vegetation that turns into fuel for wildfires. The area torched by wildfires in the Golden State each year grew by 500 percent between 1972 and 2018, thanks to climate change. California’s fire season has also gotten longer by more than two months. Between the increased likelihood of fires and PG&E’s new sensitivity to liability, Californians should expect more blackouts, says Thompson. That’s especially true in October, the peak of wildfire season in California.

California has guidelines for companies that use power outages to avoid fires, but blackouts are meant to be “a last resort.” The California Public Utilities Commission will monitor how the situation develops this week and assess how utility companies are conducting shutoffs for public safety, Terrie Prosper, director of news and outreach at the regulatory agency, told The Verge in an email.

blackouts are meant to be “a last resort”

With the potential for millions of people to lose power this week, “that sure does not feel like a last resort,” Toney says.

“The huge numbers targeted by PG&E tell us two things. First and foremost: The potential for fire danger is serious and people must be prepared,” State Sen. Jerry Hill (D-CA), whose district faces blackouts, said in an emailed statement to The Verge. “Second: PG&E clearly hasn’t made its system safe.”

PG&E has buried most of its new power lines, but there are still 81,000 miles of overhead lines, according to reporting by local public radio station KQED. Cutting the lights in response to dangerous fire weather isn’t new, but since burying those lines is likely to be expensive, the outages are likely to continue.

PG&E isn’t the only company coming under scrutiny for preemptive power outages. Southern California Edison is noticing the uptick in disastrous fires, and it tells The Verge its customers might need to prepare for preemptive power outages in the future as a result. “The extent to which these fires are destructive and deadly, that’s been a change,” says David Song, a Public Information Officer at the utility company. “So I would imagine that we’re going to have more Santa Ana wind events and so this may be something that we do again.” Song says lawsuits aren’t a factor in Southern California Edison’s blackout decisions.

“The safety of our customers and the communities we serve is our most important responsibility, which is why PG&E has decided to turn power off to customers,” Michael Lewis, senior vice president of electric operations at PG&E, said in a press statement. The company did not immediately respond to a request for further comment. 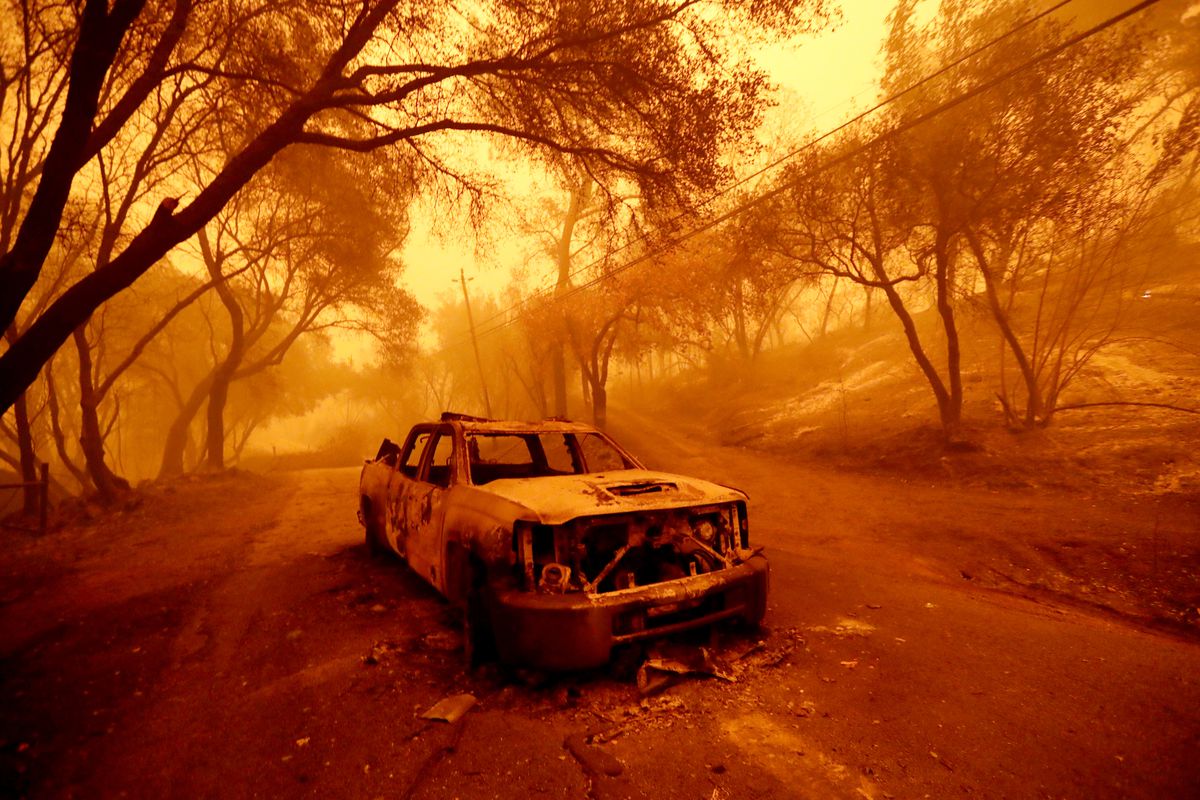 A charred vehicle was left on Honey Run Road during the Camp Fire in Paradise, Calif., on Nov. 9, 2018.Photo by Ray Chavez / Digital First Media / The Mercury News via Getty Images

As inconvenient as the extensive outages might be, fire management experts say the risk of death and destruction from past blazes in the Bay Area could warrant the action. And weather conditions at the start of the outages looked eerily similar to those that set off 2017 Northern California blazes that killed 44 people. “I don’t think it’s an overreaction. How many more of these [fires] can we afford? They’re absolute tragedies,” says Timothy Ingalsbee, executive director of the advocacy group Firefighters United for Safety, Ethics, and Ecology. He adds that some of the most dangerous places for firefighters to work are under live power lines.

“will they be doing this in perpetuity?”

But Ingalsbee and other experts warn that these outages shouldn’t become the new norm. “This is really not a viable, sustainable solution to addressing the wildfire risk from power lines,” he says. Each year, hot, dry winds sweep through the state and stir up firestorms. “Because this is an annual event, will they be doing this in perpetuity?”

What needs to happen, according to Ingalsbee, is more than cleaning up the dry debris around power lines or shutting off the power when the fire outlook is grim. He thinks making the grid more resilient in the future means generating power from more spread out renewable sources so that the state isn’t as reliant on vast stretches of dangerous power lines. “The landscape is basically sliced and diced with these power transmission lines,” Ingalsbee says. “They’re ugly scars. That blight will be eliminated if we disperse and decentralize our energy system.”