Missed Messages is a powerful romance / horror game about communicating

It can be difficult to find time to finish a video game, especially if you only have a few hours a week to play. In our biweekly column Short Play we suggest video games that can be started and finished in a weekend.

Shorter games are often able to tackle themes and ideas that would be more challenging in a big, blockbuster production. That’s one of the main reasons I decided to start this column: to highlight those smaller experiences that offer something new, inventive, or experimental. Missed Messages, from solo developer Angela He, is the perfect encapsulation of this.

In Missed Messages, you play as a college-aged girl living in one of her school’s dormitories with her roommate May. It’s a visual novel, like Butterfly Soup or One Night, Hot Springs, although at first blush it doesn’t necessarily look like it. The game opens with you waking from a dream and exploring your room. There are various objects you can click on, like plants or books, and each click is accompanied by an inner monologue that gives you a sense of the main character.

You also have access to a laptop, where they have school work they should be doing. You’ll likely be spending a lot of time on the laptop during your first playthrough. The laptop is a Mac, and actually operates a lot like an actual Mac laptop. There is a Spotify-like app open, letting you change the game’s background music to one of three songs, and there’s also a Notes app open where your character is working on her homework. She can even receive AirDrop requests, which is how everything sort of kicks off. 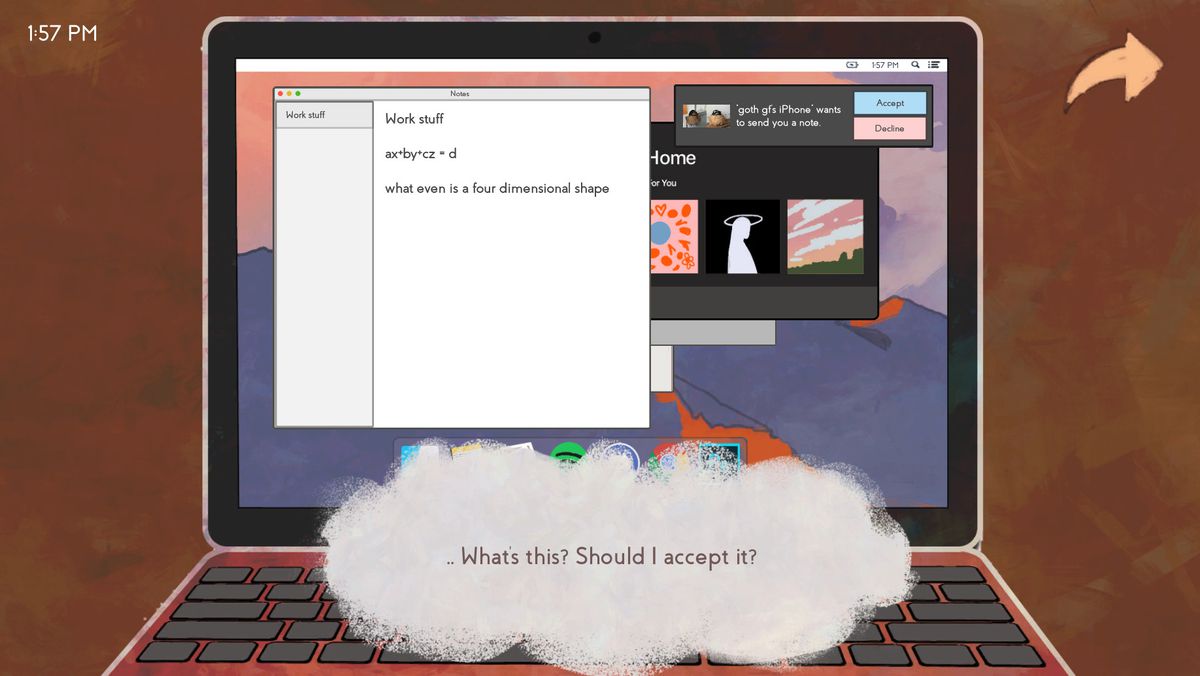 And that’s exactly what happens when you receive an image meme from “goth gf’s iPhone.” You can accept the shared image, and possibly strike up a conversation with whoever the iPhone belongs to, or you can get back to work. If and how you choose to respond, and other choices you make afterward, will then lead you down different paths to one of the game’s four endings.

Warning: there are some spoilers after this point.

The AirDrop messages are a brilliant piece of misdirection, and along with the title screen design, they set your expectations that the titular missed messages are going to be digital in nature — that this is going to be a tale about relationships in a digital age a la Don’t Take It Personally, Babe, It Just Ain’t Your Story. But instead serves to distract you, and cause you to miss the actual messages you should have been paying attention to regarding May being a suicide risk.

I don’t think the game is trying to chastise you for missing the signs on your first playthrough. It’s only natural that you would, given that you’re dropped into this space without knowing any of the history between your character and May except for what bits you can glean from the environment. So you can’t be expected to know that you should be paying attention to May’s mental state. Going in the second time, though, you have a better sense of their relationship and history, as well as what you should be doing. 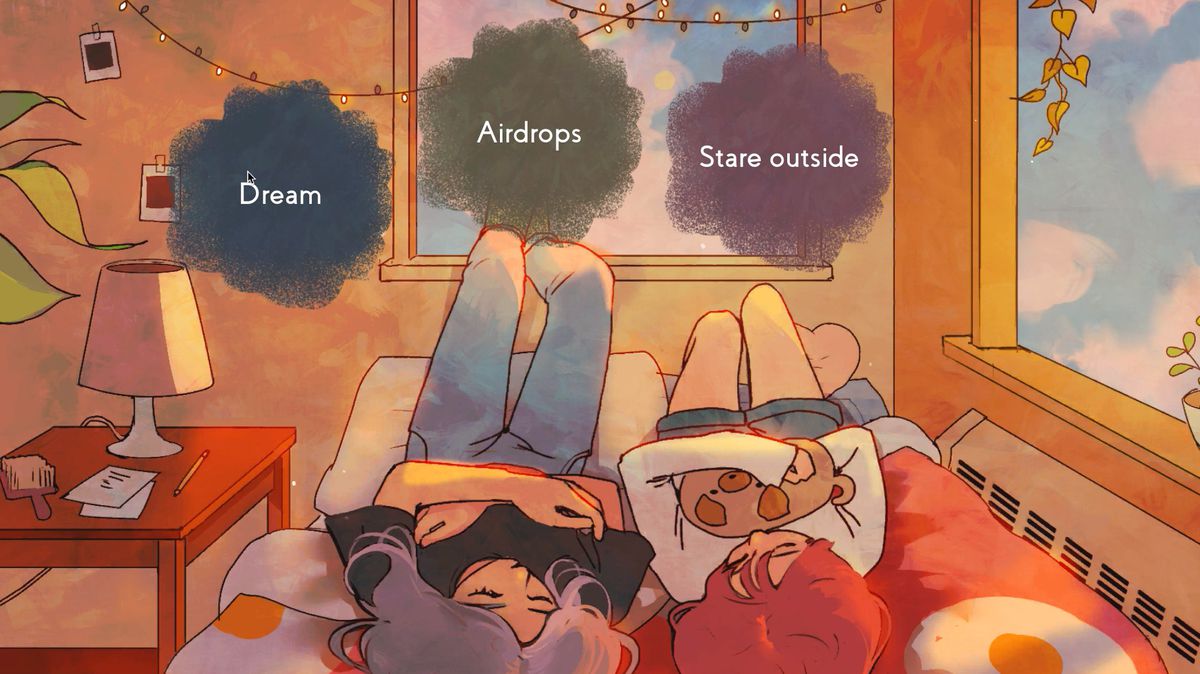 For the player, these subsequent playthroughs can feel a bit like being in a time loop, but the writing makes it feel completely normal and natural that your character is concerned and approaching May about what’s going on. It doesn’t feel out of the ordinary, as if you were somehow pushing her out of her normal routine to stop something bad from happening. The conversation they have isn’t judgmental or melodramatic. Rather, it feels amazingly normal.

Missed Messages purports to be a “romance / horror story,” although I don’t know if I would necessarily call it either. There are moments of romance and moments of horror, but collectively it feels personal. If the game had been just the conversation you’ll likely get on your second playthrough, I don’t think it would have the same impact. Instead, the game deftly and efficiently uses its first playthrough to put you in the right emotional space. That way, you can better understand and approach the situation at hand the next time you experience the story.

Missed Messages was created by Angela He. You can get it on Itch.io for pay what you want or Steam for free (Windows, Mac OS, and Linux.) It takes about an hour or two to finish.