Microsoft is detailing its plans for its popular OneNote app today. The software giant reversed course and revived its OneNote 2016 desktop app earlier this week, with a new dark mode and extended support. Microsoft has much deeper plans for this desktop app, and OneNote overall, though.

“We are literally merging all of our modern code back into the legacy 2016 codebase to create a unified single codebase that we can ship and deliver OneNote from,” explained Ben Hodes, product manager of OneNote, at a Microsoft Ignite session today. “The reason we’re doing this modern merge is to get back to a single codebase and start to deliver these features in the coming year and a half.”

The new features include:

The @mentions support will arrive in the first half of next year, and Microsoft has also been working on To Do integration that should arrive at some point next year. Microsoft’s meeting notes improvements for OneNote aren’t very clear just yet, but Hodes revealed “there are lots of nice features we can do to make that experience better.” 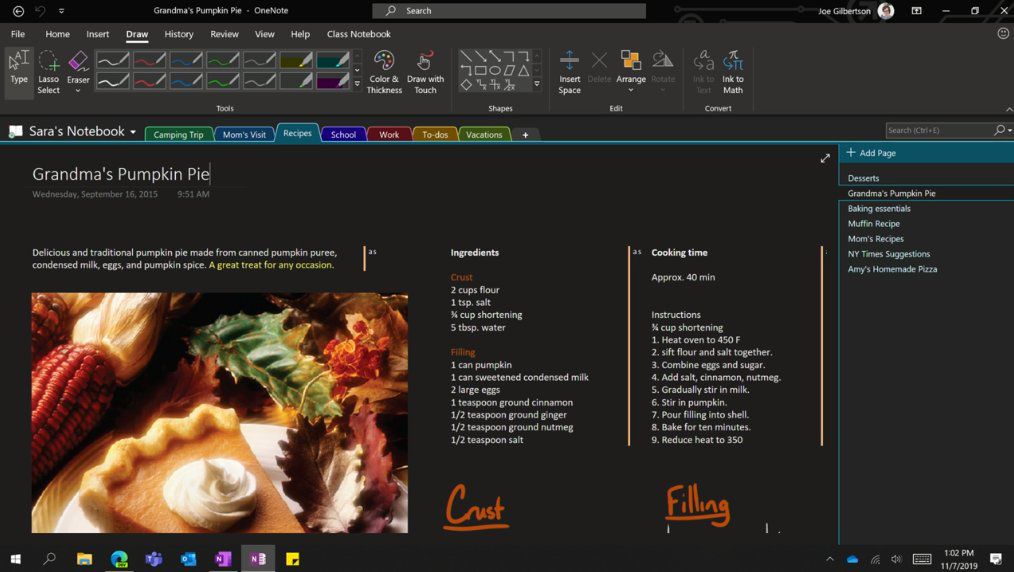 The other big part of this new codebase is Microsoft’s move to its new Fluid Framework. Microsoft has big plans for Fluid, to power the future of collaborative experiences for Office on the web. Fluid is also designed to be a new componentized document model that AI and other services can plug into.

“We are working very closely with the Fluid engineering team to co-develop the Fluid Framework and that sometime next year we’ll be debuting a preview of what OneNote in Fluid will look like together and what they’ll be capable of together,” explained Hodes. Fluid will also appear in Teams, mail in Outlook, and a variety of documents in Office next year.

So what does this mean for the separate OneNote for Windows 10 app? Hodes didn’t reveal exactly what Microsoft is planning, but Mike Tholfsen, a Microsoft product manager, says “there will still be a Desktop and separate Windows 10 app.” It’s hard to imagine that two OneNote apps will exist to confuse Windows 10 users, but Microsoft does still have two Skype apps. It’s far more likely that at some point Microsoft will put development of this dedicated version on hold, as the company will start installing OneNote 2016 by default with Office 365 installs in March.

OneNote was the exception, but Microsoft is reviving OneNote 2016 and has big plans to merge all its work on the Windows 10 version back into the legacy software, so the focus appears to be on the desktop version of OneNote once again. Microsoft didn’t clarify its plans in a statement to The Verge. “OneNote for Windows 10 is alive and well and preinstalled on Windows 10 devices or available for free from the Microsoft Store,” says a Microsoft spokesperson.