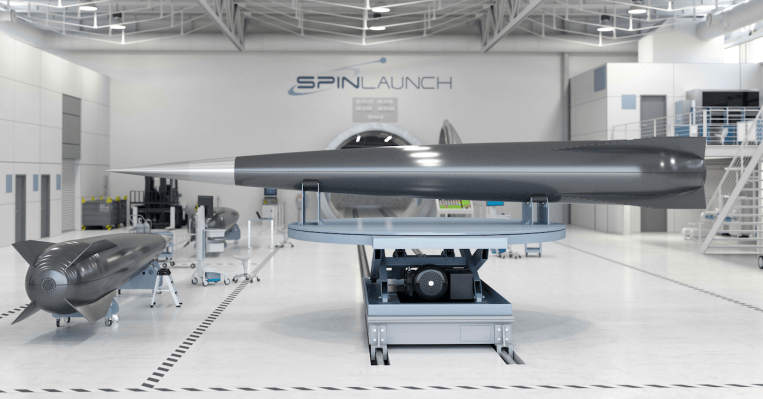 SpinLaunch, a company that aims to turn the launch industry on its head with a wild new concept for getting to orbit, has raised a $35M round B to continue its quest. The team has yet to demonstrate their kinetic launch system, but this year will be the year that changes, they claim.

TechCrunch first reported on SpinLaunch’s ambitious plans in 2018, when the company raised its previous $35 million, which combined with $10M it raised prior to that and today’s round comes to a total of $80M. With that kind of money you might actually be able to build a space catapult.

The basic idea behind SpinLaunch’s approach is to get a craft out of the atmosphere using a “rotational acceleration method” that brings a craft to escape velocity without any rockets. While the company has been extremely tight-lipped about the details, one imagines a sort of giant rail gun curled into a spiral, from which payloads will emerge into the atmosphere at several thousand miles per hour — weather be damned.

Naturally there is no shortage of objections to this method, the most obvious of which is that going from an evacuated tube into the atmosphere at those speeds might be like firing the payload into a brick wall. It’s doubtful that SpinLaunch would have proceeded this far if it did not have a mitigation for this (such as the needle-like appearance of the concept craft) and other potential problems, but the secretive company has revealed little.

The time for broader publicity may soon be at hand, however: the funds will be used to build out its new headquarter and R&D facility in Long Beach, but also to complete its flight test facility at Spaceport America in New Mexico.

“Later this year, we aim to change the history of space launch with the completion of our first flight test mass accelerator at Spaceport America,” said founder and CEO Jonathan Yaney in a press release announcing the funding.

Lowering the cost of launch has been the focus of some of the most successful space startups out there, and SpinLaunch aims to leapfrog their cost savings by offering orbital access for under $500,000. First commercial launch is targeted for 2022, assuming the upcoming tests go well.

The funding round was led by previous investors Airbus Ventures, GV, and KPCB, as well as Catapult Ventures, Lauder Partners, John Doerr and Byers Family.