“It definitely hurts, especially when we have those hard requirements that when something hits, there’s nothing we can do about it,” Capt. Jason Fontenot, the space lift weather operations flight commander at the 45th Weather Squadron, said during a press call. “And we just kind of have to pass on the information, saying, ‘Even though we’re not at the launch window yet, this is very unlikely that we will see this take off today.’”

Military personnel who work at the Squadron in Cape Canaveral, Florida are used to being the ones to call off the show. Fontenot and his team at Patrick Air Force Base are responsible for monitoring the weather surrounding all of the launches out of the Cape, which is home to the busiest spaceport in the United States.

“It definitely hurts, especially when we have those hard requirements.”

That can be tricky since the weather in Central Florida is unpredictable. During the summer, humid, hot air rises, creating big puffy clouds and storms that are bad for flight. Spaceflight engineers often make jokes ahead of launches, asking the 45th’s launch weather officer, Mike McAleenan, to keep the clouds at bay. “The only thing we need to do is figure out how to control the weather,” Kathy Lueders, the program manager for NASA’s Commercial Crew Program, said during a pre-launch press conference on Monday, May 25th. “And I’m hoping that Mike’s gonna help us out with that when he starts talking.”

Later, McAleenan joked: “First I want to point out that we’re in the weather sales business, not production. So you’ll have to talk to somebody else about that part of it.”

A team of five from the 45th Weather Squadron monitors conditions around a launch, according to Fontenot. The lead launch weather officer, McAleenan, coordinates between the launch customer — SpaceX, in this instance — and the 45th with up-to-date information. One officer monitors the weather via radar around the Cape, while another coordinates with a weather reconnaissance aircraft. “We are in constant contact with that aircraft so they can go and be our eyes in the sky, flying around clouds and giving us heights, bases, thickness levels of clouds,” said Fontenot. The other two spots are reserved for the oversight team, who make sure that everyone is on top of their checklists. Fontenot is part of the oversight group. 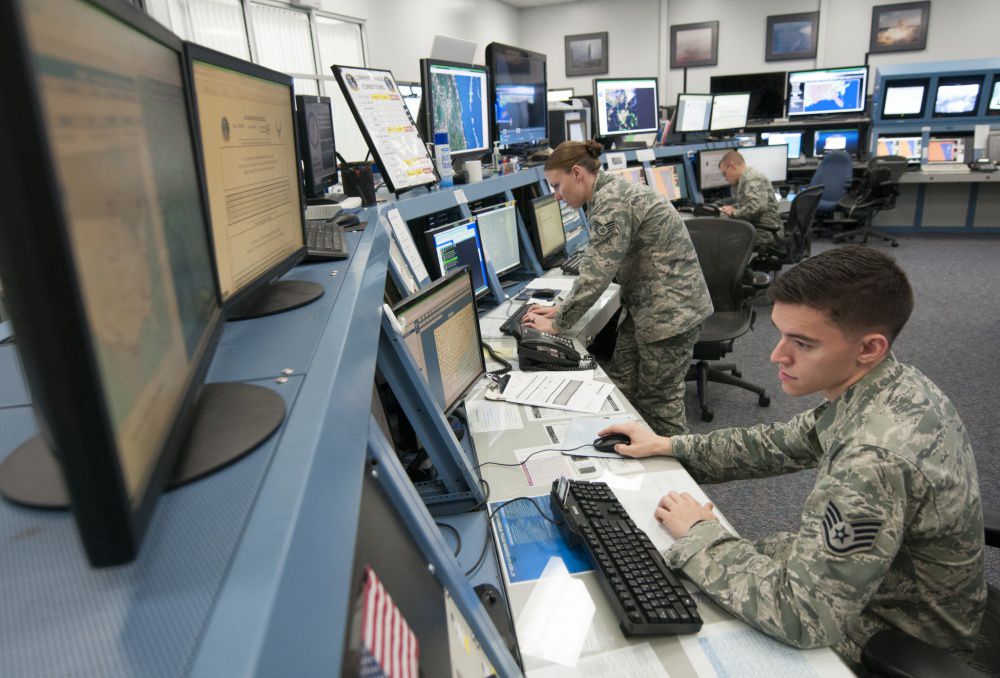 Members of the 45th Weather Squadron monitoring weather ahead of a launch in 2016.Photo by Sean Kimmons / US Air Force

The 45th follows a strict set of guidelines that harken back to 1987. That year, an Atlas-Centaur rocket took off from Cape Canaveral, ascending into thick clouds and heavy rain. The highly electrified environment within the clouds triggered a lightning strike that hit the vehicle and destroyed its guidance system. “It started veering off course, and we had to actually blow up the rocket,” Fontenot said.

It wasn’t the first time that lightning had been an issue for a launch. Engineers learned over the years that a launching rocket could actually trigger lightning during flight, even if no lightning was present in the area. All it took was a highly charged environment. Lightning famously struck NASA’s Saturn V rocket twice during its ascent on Apollo 12 — the second time humans landed on the Moon — though the mission was unharmed.

After the Atlas-Centaur incident, NASA and the Air Force established a committee called the Lightning Advisory Panel, consisting of weather experts from all over the country. They eventually came up with the rules for what conditions are acceptable for a rocket launch. These include certain criteria for what types of clouds can and cannot be in the area. Of particular concern are cumulus clouds and anvil clouds, which are highly charged. There is also a criterion known as the electric field mill rule that places a limit on the strength of the electric field in the atmosphere.

That rule was one of the biggest showstoppers for SpaceX’s launch attempt on Wednesday, along with some other constraints. “Unfortunately, we’re not going to launch today,” one engineer told the crew. “It was a great effort by the team, and we understand, and we’ll meet you there,” NASA astronaut Doug Hurley, one of the astronauts on the flight, said in response.

The 45th Weather Squadron is primarily on the lookout for conditions that would violate these lightning rules. If one of the 10 lightning-related rules is violated, a launch provider absolutely cannot launch out of the Cape Canaveral area. “That is a hard and fast requirement for a go/no-go weather decision,” said Fontenot.

The Squadron monitors other conditions, too — notably, how fast winds are blowing on the ground and above the launch site as well as activity from the Sun and the temperature. All of these factors may hamper a launch, but the rules surrounding these conditions are specific to each launch provider. Some rockets can handle different wind speeds depending on how they’re built and how they are configured for flight.

These so-called user constraints are ultimately decided by the organizations launching the rockets. The 45th will still provide guidance on these conditions, but the launch providers will make the call on whether upper-level winds, for instance, are suitable enough for their rockets to fly. Usually, the launch provider listens to the Air Force, though. “I have never seen it before where we say we’re violated for something and they decide to go,” Fontenot said. “Typically those criteria are in place for a reason. And so when we say we are being violated for that specific constraint, they will typically not fly due to safety concerns.”

“I’d rather not launch and evade any threat to the rocket or to the crews.”

For the upcoming SpaceX launch, the weather surrounding the launch site isn’t the only concern. SpaceX’s Crew Dragon capsule has an emergency escape system that can remove the spacecraft from the rocket during flight if something goes wrong. That means the Crew Dragon could land in a large swath of the Atlantic Ocean after liftoff. SpaceX and NASA are monitoring conditions in up to 50 potential landing areas from Florida to Ireland so that the astronauts don’t accidentally get caught up in choppy seas. The 45th Weather Squadron is providing some guidance on the weather in those abort zones, though NASA and SpaceX are monitoring those forecasts more closely.

Overall, weather remains a very restrictive factor in launching SpaceX’s first crew to space. But Fontenot argued it’s important to be cautious, given the potential for something to go wrong — even if making the call to scrub on Wednesday was painful.

“I’d rather not launch and evade any threat to the rocket or to the crews and scrub for another day where we have a better opportunity,” Fontenot said. “So yes it was kind of disappointing, but I’d rather launch during better weather, and hopefully we’ll give it a chance on Saturday.”