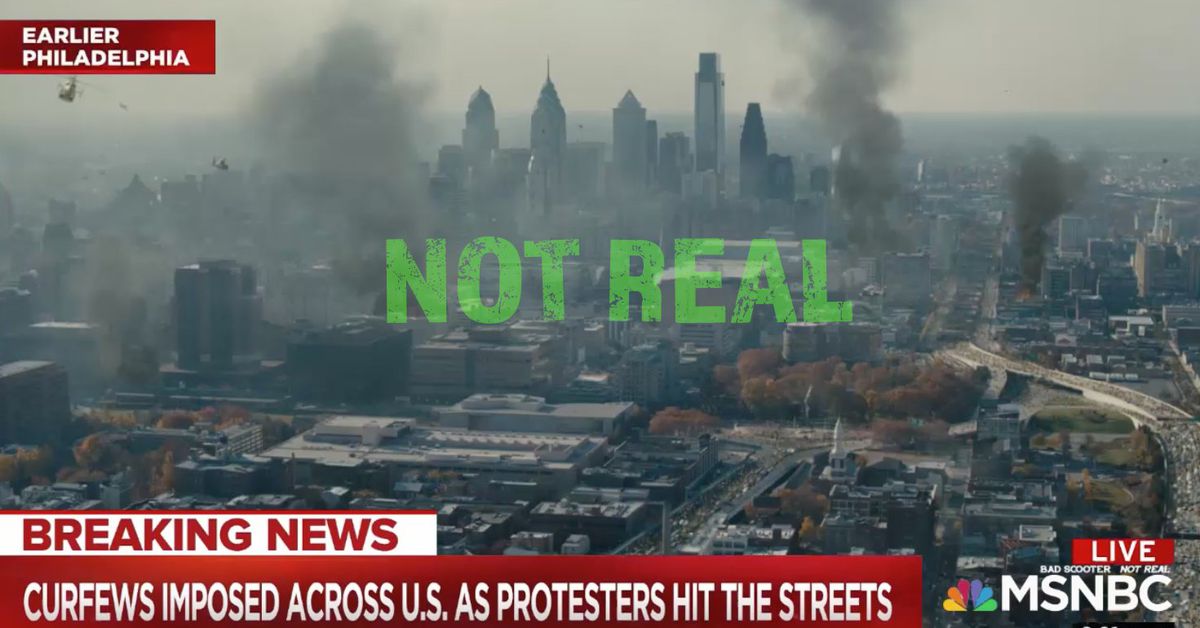 An apparent Twitter joke got out of control this weekend, falsely convincing some users — and possibly even the leader of the QAnon conspiracy theory — that MSNBC ran a broadcast with World War Z shots instead of real protest footage.

Over the past day, an image and video clip have spread around Twitter comparing a news broadcast with a scene from the Brad Pitt film World War Z. The clip seems to show MSNBC reporting on the weekend’s nationwide protests, narrating over an aerial view of Philadelphia dotted with fires and smoke plumes. If you look up World War Z’s trailer, you can see the same shot midway through the video, suggesting the news outlet either badly screwed up its reporting or deliberately falsified the story. But if you look back at the MSNBC video, you’ll see something else: a tiny label above the chyron reading “BAD SCOOTER / NOT REAL.”

“Bad Scooter” is the name of a small Twitter account whose operator has taken credit for the video, although the original copy has apparently been deleted. “Well that escalated quickly. YES, that MSNBC clip was from World War Z, I even marked the video above the MSNBC logo “NOT REAL,” the user tweeted last night. “I dramatically underestimated Twitter, many pointed it out, some claimed it was ‘real’ — that was stupid of me. I apologize.” Bad Scooter even posted the original MSBNC video they’d modified, which originally featured actual footage of Philadelphia.

But Bad Scooter’s disclaimer wasn’t enough. A comparison screenshot was already spreading across Twitter with no attribution. And this morning, it was posted on the forum 8kun by Q — the enigmatic figurehead of an elaborate and expansive conspiracy that accuses Democratic leaders of cannibalism and pedophilia. “MSDNC [knowingly] using fake footage? MSDEN pushing [AMERICA ON FIRE] narrative? Why?” asked Q, apparently seriously. “ENEMY OF THE PEOPLE.”

Confusion among QAnon supporters followed. At first, 8kun readers blessed Q for warning them about the deception. “Thanks for the guidance Q… It would be a very confusing time for the world without this platform,” wrote one. Then, a few users caught the mistake. “This footage was in World War Z but it looks like it was NOT broadcast on MSNBC as ‘real,’” wrote one. “Staring to look like Q gave us fake news. Sorry to say.” Within a few hours, a new Q post seemingly “confirmed” that MSNBC hadn’t aired the footage. “Good catch!” Q told a user who asked if the image was fake.

Well that escalated quickly. YES, that MSNBC clip was from World War Z, I even marked the video above the MSNBC logo “NOT REAL.”

I dramatically underestimated Twitter, many pointed it out, some claimed it was “real”-that was stupid of me.

This isn’t likely to seriously discredit Q among QAnon supporters, although a few did express consternation about the mistake. “Don’t you have better intel than to fall for this?” asked one. Meanwhile, “World War Z” is now trending for at least some users (including me) on Twitter, which doesn’t seem to have labeled images under the site’s “synthetic and manipulated media” policy.

Twitter jokes have gone awry before, like a parody excerpt of Michael Wolff’s book Fire and Fury, which fooled many users into believing President Donald Trump spent hours watching a fake “gorilla channel” on television. It’s also common for screenshots from movies to make the rounds on social media during big events — an image from Designated Survivor was apparently passed off as a picture of Washington, DC last night. As Q’s “enemy of the people” note shows, though, the MSNBC tweet fueled dangerous claims that media channels can’t be trusted.

After posting the unmodified video clip, Bad Scooter offered another apology. “I am NOT a #Trump supporter by any means, not even close,” they wrote. “But in my sh*t judgement — piss poor taste, I really f’ed up and I am sorry.”