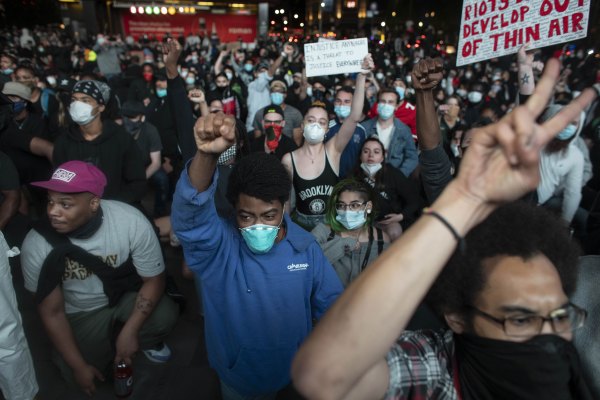 As protests against police brutality and economic manifestations of systemic racism in the U.S. continue, venture capital firms are joining the chorus of technology industry advocates lending their support to the cause.

For the past three days, technology company executives and the investors who backed them have issued statements of support for the protests and the Black Lives Matter movement. Firms like Benchmark, Sequoia, Bessemer, Eniac Ventures, Work-Bench and SaaSTR Fund founder Jason Lemkin all tweeted in support of the cause and offered to take steps to improve the lack of representation in their industry.

But some Black entrepreneurs and investors are questioning the motivations of these firms, given the weight of evidence that shows inaction in the face of historic inequality in the technology and venture capital industry.

“The way to find, hire and fund black people in the tech world is the same as finding, hiring and funding any other group. You build relationships with people in that group, you seek out thought leaders from the community and learn from them, you tell your hiring and investing teams that there’s a hole in the fund’s expertise stack and you fill it. It’s not about tokenizing one person or donating to a one time effort or writing it off as a pipeline problem,” wrote Sarah Kunst, the founding managing partner of Cleo Capital, in a text to TechCrunch. “It’s using the embarrassment of skills and resources these funds have to learn, build relationships and deploy capital.”

Entrepreneurs and investors say steps from investors must boil down to two main actions: hire the people and wire the investment.

In a Medium post today, the New York-based investment firm Work-Bench detailed steps it would take to make sure it is encouraging Black entrepreneurs and investors.

In addition to financial commitments to organizations, including the Equal Justice Initiative, the Southern Poverty Law Center and Color of Change, the firm is instituting new steps to ensure that its own operations also work to promote Black entrepreneurs and investors.

The firm detailed a number of other steps it will take “if there is interest,” including collating a public database of Black founders working on enterprise startups for other enterprise VCs, and working with HBCUvc and other Black VC firms.

Some firms are taking steps to go even further — including the creation of dedicated pre-seed investment funds that would focus exclusively on companies coming from historically Black colleges and universities.

These initiatives are in their early stages, and investors are not ready to disclose too much about the steps that they’re taking, but they extend far beyond dedicated funding. Investors are also looking to step up their recruitment at HBCUs and land-grant universities to focus more on diverse candidates and doing internal training from within portfolio companies to create a new generation of minority entrepreneurs through more extensive and robust entrepreneur-in-residence programs.

Firms are also looking to create benchmarks and internal surveys to monitor their progress and find out where their firms and portfolios are falling short. This could start with firms choosing to publish how many Black founders they have invested in to date, with annual follow-ups, for the spirit of transparency and accountability.

The data is accessible to investors internally, though few firms publish such statistics publicly. Initialized Capital disclosed on Monday that 7% of companies in its most recent fund are led by Black founders.

Problems with diversity extend into the funds themselves, as Backstage Capital founder Arlan Hamilton wrote in a direct message to us.

“Investors have been reaching out to me left and right asking what they can do. It’s not complicated: Invest in Black founders. You don’t have to invest in ALL Black founders. You can keep your thesis and yes even your so-called ‘standards’ and find multiple Black founders to invest in,” Hamilton wrote. “If you need help, I have 130 portfolio companies + I can introduce you to a curated list of a dozen Black investors to hire. My email address is [email protected] No more excuses.”

Internal recruitment efforts for VC partners can be inherently biased. Think of it as a domino effect: if LPs only fund white GPs, then white GPs can stick to their preexisting networks for looking for other partners to bring on. Unless non-diverse VC firms break their existing networks, either through recruiters or underrepresented founders, this effect will continue.

‘And I do hope to write the check’

Partners at venture firms are committing to doing more themselves to support the community of Black entrepreneurs.

“I don’t do that many investments a year (I am a slow+quiet investor), but please email me your decks and pitches,” wrote Jason Lemkin on Twitter. “I will try to only meet/Zoom with black founders in June.”

Nihal Mehta, the founder of New York-based investment firm Eniac Ventures, announced on Twitter that he was taking no-charge appointments with Black founders via Superpeer, which sells one-to-one video calls. Within 24 hours of Mehta’s tweet, he was booked for the summer: 103 meetings with Black founders.

“This means there is incredible demand, a large gap that needs to be filled, between Black founders and the tech community at large,” Mehta said.

The entire Eniac Ventures team is also opening up free Superpeer consulting slots dedicated to chatting with and investing in Black founders.

Ha Nguyen, a partner at Spero Ventures, is hosting a Black founders breakfast and AMA lunch on Friday. Nguyen also offered Black founders to reach out when they need help with the fundraising process, pitch deck and intros for their next check. “And I do hope to write the check,” Nguyen wrote in a LinkedIn post.

Yin also noted that the firm is working to build informal deal flow relationships with founders who have diverse networks, like the firm’s venture associate intern, Jasmin Johnson, who works with Score 3, or Lolita Taub, former principal at Backstage, and her investor-matching program.

Taub has a decorated past in tech and venture capital, so her network is broad, but her investing program itself is simple. It is reproducible for any super connector out there in the Valley with a diverse network.

‘The talent has always been there’

As the investment community rushes to voice its support for the Black community, Black investors and startup founders question their motives.

That it has taken a week of protesting and the deaths of countless Black men and women at the hands of police to wake up investors to the problems that the industry — and the country at large — faces is a sign of the depth of the problem.

The Black investor-led firm Precursor released a statement on Sunday:

Investors like Marlon Nichols at MaC Venture Capital and Kobie Fuller at Upfront Ventures have made the development of a diverse group of founders a priority through their own investment activities and the creation of startups like Valence — a network for African American talent.

The data on inequality in the industry is staggering, as Nichols noted in a post earlier today:

So, if you are truly opposed to racism and discrimination, something you can start to do immediately is stop making excuses for not investing in startups and funds led by Black men and women. Instead, make the investments, extend your networks, hire us in leadership/ decision making roles, and hold us to the same standards that you do for White led startups and venture funds.

There’s still a long way for the industry to go and plenty of ways investors can improve.

“Every top MBA program has a black student organization, every top tech company has black ERGs, go recruit from those pools to start. There are very visible funds like Ulu, Precursor, my own fund Cleo Capital who are led by black tech leaders. There are very visible investors like Chris Lyons, Ken Chenault, Adrian Fenty and Megan Maloney,” Kunst wrote.

“We are all vocal about where we spend our time finding and supporting black tech people. We speak at events like Culture Shifting Weekend and Black Women Talk Tech, we support orgs like Code2040, HBCUVC and Blck VC…. Simply put, we’ve done the work and the talent has always been there. What’s left is for larger funds to follow that lead and make a real commitment to hiring black VCs as well as funding black founders and encouraging their portfolio companies to hire black people into positions of leadership.”

The efforts announced by large venture capital firms in the last few days should broaden the access that underrepresented founders have to venture capital money and decision-makers and could lead to some checks. But calendar invites and emails will not solve racial injustice. Nor will a dedicated month of talking to Black founders solve the pattern-matching that systemically sits within venture capital.

Therefore, more robust actions are needed by the venture community, because statements are only as powerful as the checks they write and hires they make.