Seventeen! This laptop has a 17-inch screen. It also weighs 2.98 pounds.

It’s very unusual to see a 17-inch laptop under four pounds — let alone under three. Couple that with a $1,499 starting price (our model currently goes for $1,699), and you’re looking at a pretty niche target demographic. For that niche, though, this laptop tracks.

LG hasn’t reinvented the wheel; the 2020 Gram 17 is largely an iterative update to the 2019 model. The company has made some key improvements: the chassis and keyboard layout have received minor tweaks, the battery is bigger, and there’s a new 10th Gen Core i7-1065G7 under the hood. But the massive screen remains the singular reason to buy this laptop, so you should only spend $1,699 on this if you’re sure that’s what you want. 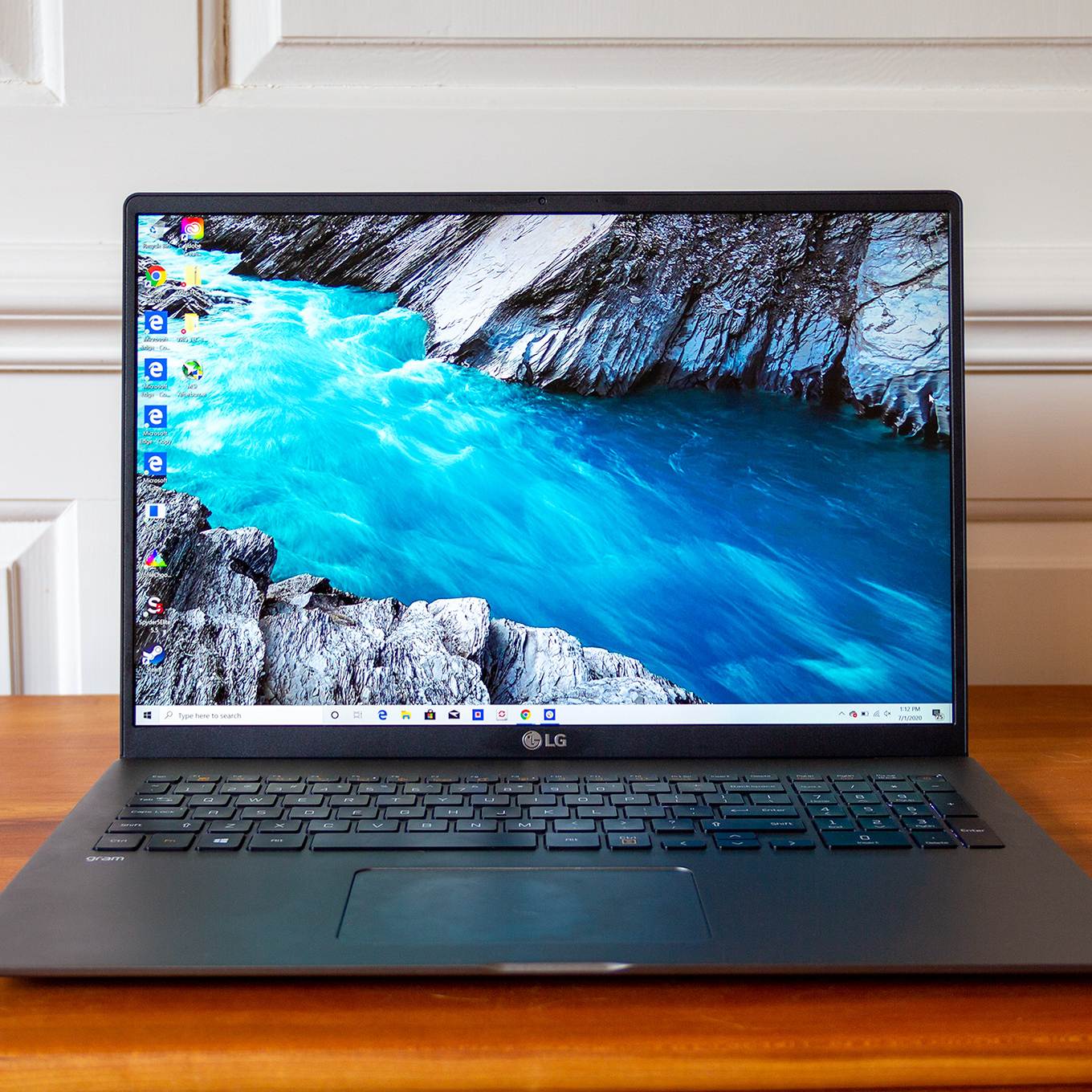 It’s hard to put into words just how big a 17-inch screen is. The panel has a 2560 x 1600 resolution with a 16:10 aspect ratio — so not only is it wide, but you get an extra bit of vertical space compared to many popular laptops. Using the LG Gram 17 feels more similar to using a desktop than it does a 13-inch 16:9 screen. It’s a ton of space. I pretty much always had two (or even three) things open at once and never had to zoom out.

It’s also a nice-looking panel. There’s a bit of glare, but I had no trouble working in bright environments with the screen around medium brightness. Colors looked great (the Gram covers 99 percent of the sRGB gamut and 74 percent of AdobeRGB), and details were crisp. Videos are, of course, massive. I watched half an episode of Dark on the Gram, and the characters looked miniature when I finished on a 13-inch device.

It’s not a perfect display, of course. There was some ghosting in action scenes, and it was visible enough that I would probably not want to play games on the Gram 17. (Of course, it doesn’t have the horsepower to be a gaming rig anyway. More on that later.) It’s also not the brightest screen out there; it reached 369 nits at max brightness. That’s enough for indoor browsing, but you’ll likely want something brighter if you plan on doing any creative work outside or near a bright window. The MacBook Pro 16 and the Dell XPS 17 both get up to 500 nits. And there’s no touch support — an omission that’s understandable (touchscreens come with a serious weight penalty) but still disappointing at a $1,699 price point.

I sometimes thought the Gram’s panel was too big. When I worked in a full-screen Google Doc, there was so much emptiness on each side that I felt like I was wasting space. That’s, again, a reason to strongly consider whether you need this sort of machine. If you’re not often working in split-screen mode, you’ll likely be leaving some of the panel unused — and at that point, you can get any number of 15- and 16-inch models for a lower price. 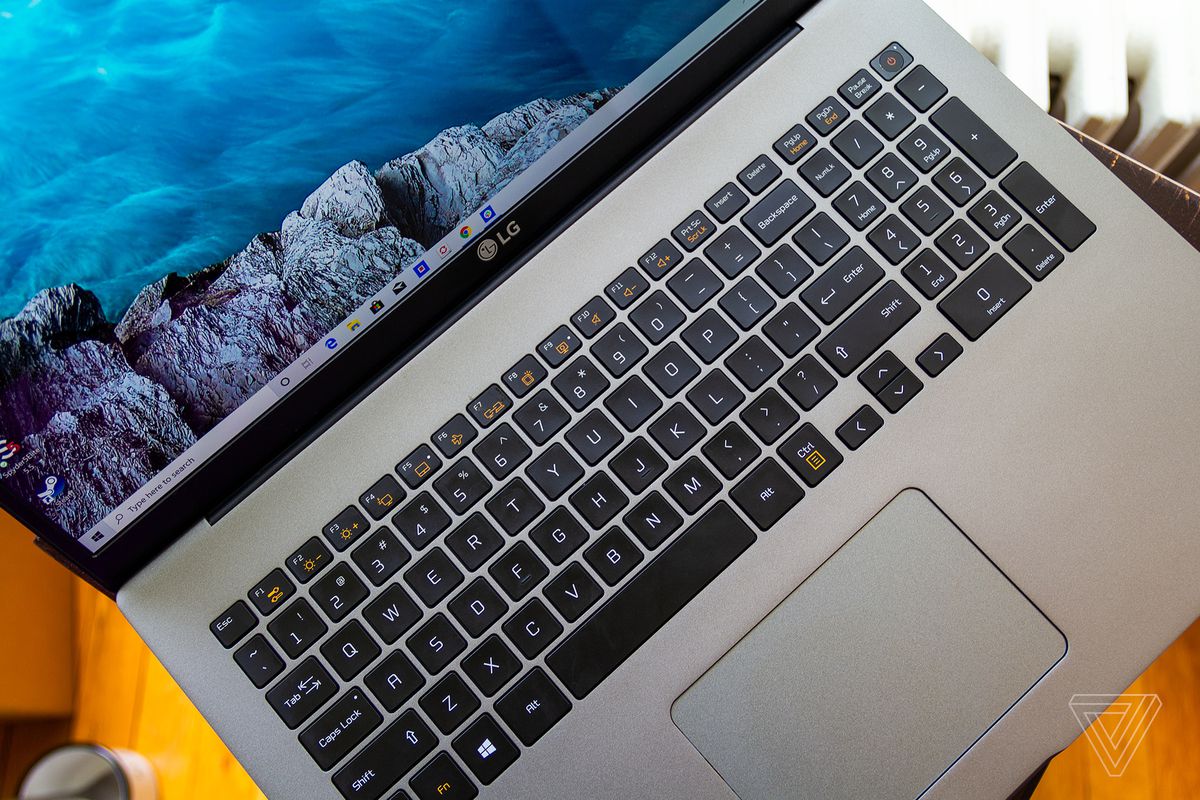 LG has updated the keyboard and numpad.

There’s nothing that the Gram 17 does terribly

A laptop so light usually comes with major caveats. Refreshingly, though, there’s nothing that the Gram 17 does terribly.

Battery life is exceptional. The 2020 Gram comes with an 80Wh battery (last year’s was 72Wh), and I got 10 hours out of it. (I ran the machine through my workload of around a dozen Chrome tabs, Slack, some Zoom calls, and occasional YouTube or Spotify streaming, at 200 nits of brightness on the Better Battery profile.) That’s better than I’ve gotten from the MacBook Pro, the XPS 15, and just about any other laptop of this size. (The included 48W charger takes a while to juice the Gram up, though. In an hour, it only charged the battery 37 percent.) 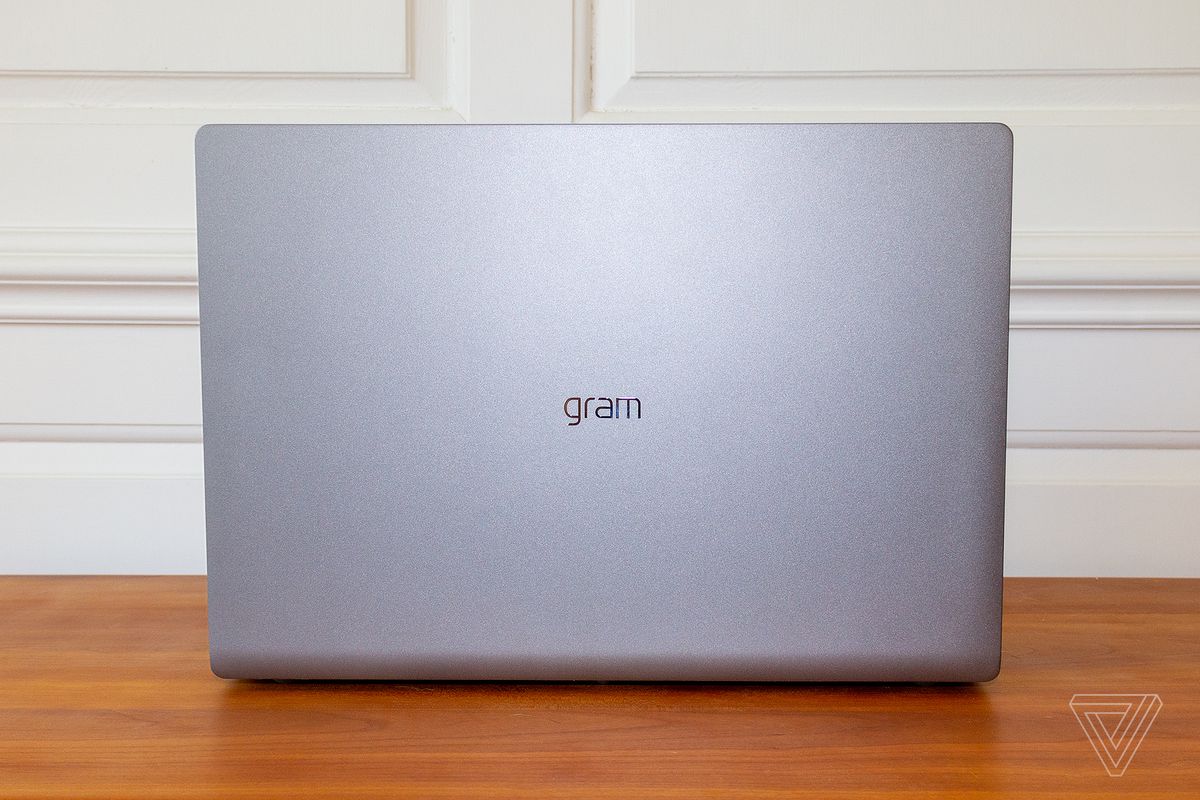 The silver lid is quite nice.

The keyboard is great; it’s backlit, and you can flick between “low” and “high” brightness levels with one of the function keys (though I didn’t notice a huge difference between them). The wide chassis leaves plenty of room for a numpad, another feature we don’t see on ultrabooks every day. 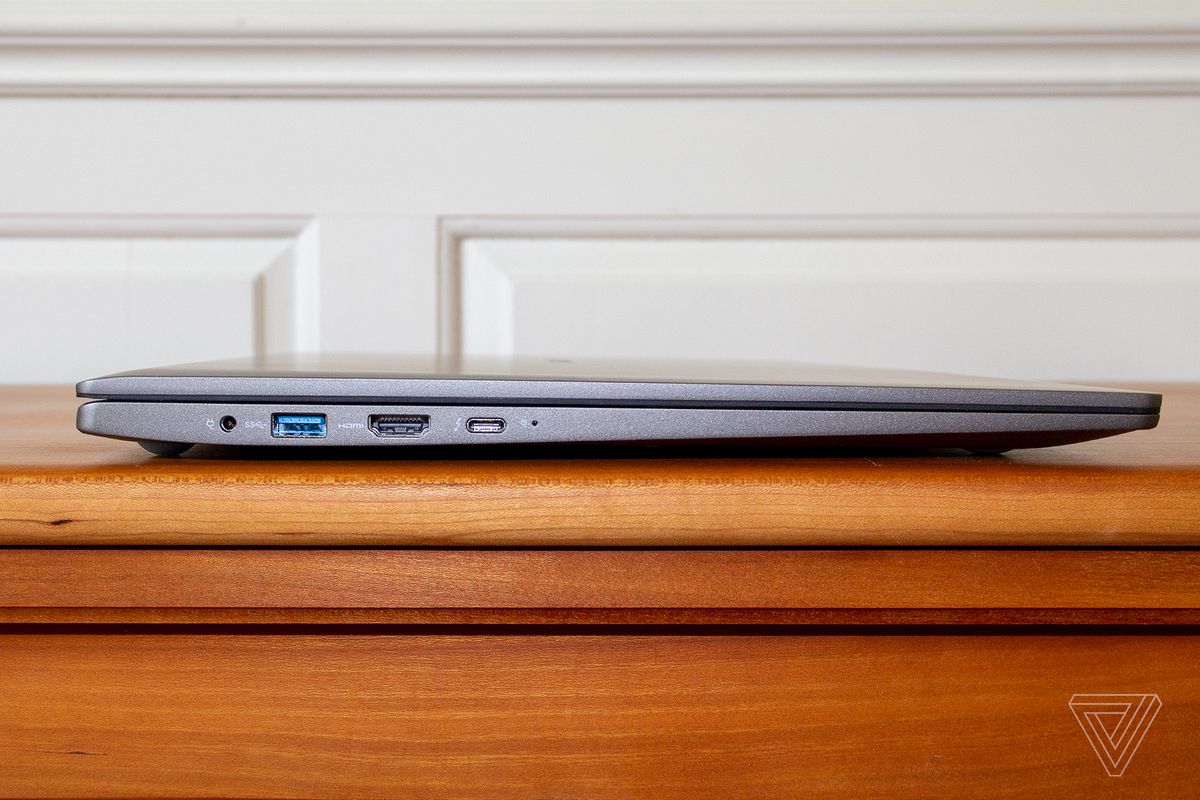 LG has made some tweaks to the keyboard since last year: some keys (including Backspace, Enter, Shift, and the numpad’s 0) got bigger, and a fourth column has been added to the numpad that includes large enter and plus keys. I think Backspace is still a bit small — I accidentally hit the adjacent Numlock every so often — but otherwise, the typing experience was great, and I maintained my typical speeds.

The touchpad is smooth and a comfortable click. Like last year’s Gram, though, it’s placed in the center of the chassis rather than directly below the spacebar. That meant my right hand was often resting on the trackpad while I typed, and I had occasional issues with palm rejection. It’s not a deal-breaker, but it takes some getting used to. 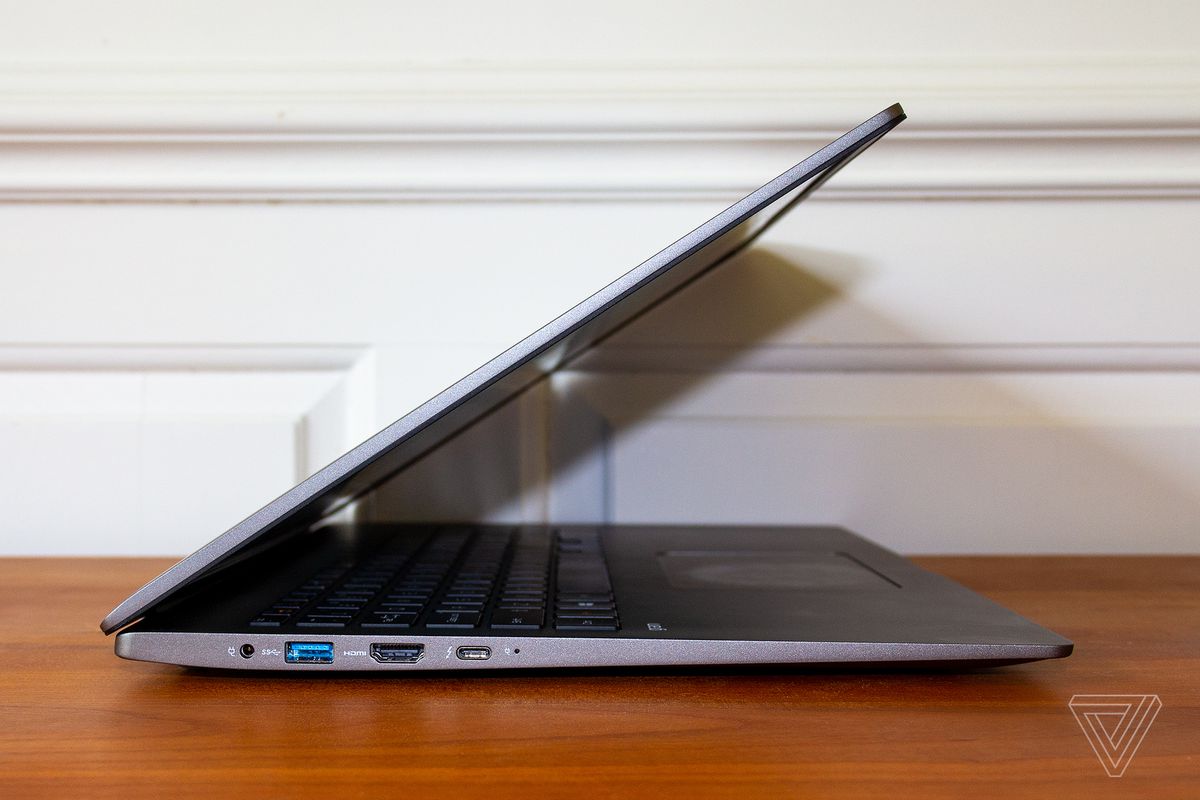 Despite its lightness, the Gram 17 isn’t the thinnest laptop around.

There are two areas, though, where the Gram 17 doesn’t measure up to its price point. The first is the design: it’s just not a looker. LG has removed a large, visible hinge that made last year’s model look a bit chunky. But it’s still a thick laptop, and the chassis is made of a dark silver magnesium alloy that feels like cheap plastic. The Gram isn’t necessarily ugly, but it would look like a toy next to an XPS.

The second is performance.

The Gram 17 will get the job done for most people who are just browsing. I loaded up dozens of Chrome tabs with no problem and only saw slowdown if there were multiple downloads running or files being copied in the background. The chassis stayed a comfortable temperature during my daily use, and I only heard the fans or felt serious heat under very heavy loads. I looped Cinebench R20 five times, and the CPU stayed consistently in the mid-80s, never passing 90 degrees Celsius. 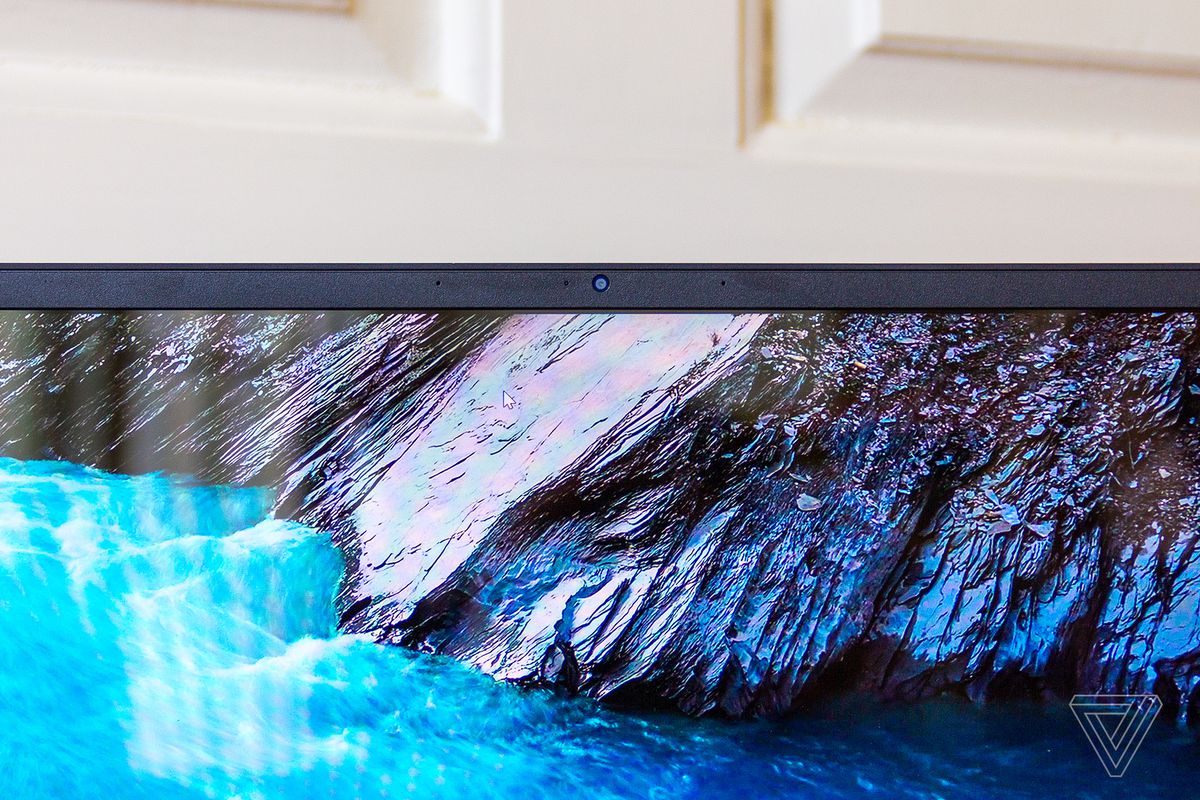 There’s an HD webcam, but no facial recognition.

If you were planning to play games, though, the Gram is out. I attempted to run Shadow of the Tomb Raider at 1920 x 1080 resolution on its lowest possible settings, and the laptop managed a measly average of 12fps. (It was a slow and stuttery experience.) It also took 30 minutes to complete a complex export in Adobe Premiere Pro — a significantly worse result than we’ve seen from other devices with integrated graphics like the XPS 13 and the Surface Laptop 3 (not to mention the MacBook Pro or anything with a GPU). Even basic photo editing in the Photos app was a slog.

These results aren’t unexpected, and they don’t make the Gram 17 a bad laptop. It’s just important to know what you’re paying for. The intent of the Gram line isn’t to create workhorses; it’s to make the lightest laptop possible. In that category, the Gram 17 has succeeded in rising to the top of its class.

That means there’s a very specific user for whom this laptop is a great purchase: you must require a 17-inch screen, you must care about lightness above all else, and you must not plan on doing anything that taxes the integrated graphics. If you check those three boxes, the LG Gram 17 is the obvious choice for you.

If that’s not you, there are better options.

Photography by Monica Chin / The Verge