Though the G923 looks very similar to the G29 and G920, it features an all-new force feedback system the company is calling “TrueForce.” The system is designed to provide more realistic feedback through the wheel, thanks to integration with a game’s physics and audio engines. The wheel can then take those inputs, such as the level of noise coming from a car’s engine or the surface the wheels are traveling over, and translate them into vibrations that can be felt through the wheel. The company says the electronics inside the wheel are able to sample these inputs 4,000 times per second and adjust its force feedback motors accordingly.

Compared to other force feedback systems, TrueForce is able to provide a wider variety of inputs to the driver. In practice, that means the wheel is basically humming or vibrating the entire time you are racing. You can feel the engine rev as you hit the accelerator or subtle changes in the road as you are driving. It’s all meant to make the experience closer to real life, or at least more immersive than before.

Game developers will have to integrate Logitech’s SDK to support TrueForce, otherwise the wheel will have the same force feedback system as the prior versions. Logitech says GRID, Assetto Corsa Competizione, and Gran Turismo Sport will have support for the system immediately, while iRacing, F1 2020, and Dirt Rally 2.0 plan to add the feature in September. 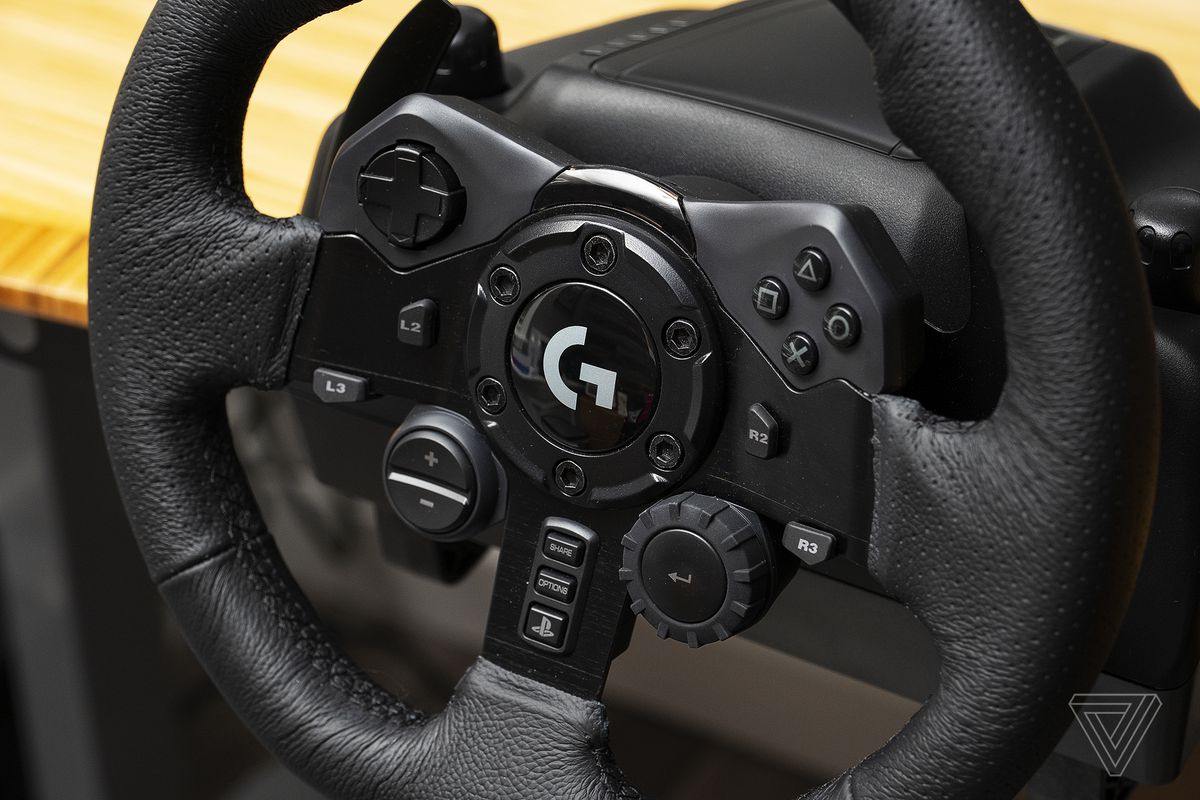 Aside from the TrueForce technology, the G923 is not hugely different from the prior models. Logitech says it has refined the stitching on the leather wrapping, the internal electronics have been upgraded to handle the input from the TrueForce system, and there’s a new progressive spring in the brake pedal. The actual motors and gear mechanisms are the same as the G29 and G920, as are the steel paddle shifters, aluminum spokes, and glass-filled nylon clamps.

Unlike the G29 and G920, which had different button layouts and capabilities, the G923 is the same whether you are buying the PlayStation 4 model or the one for Xbox. (Both versions work exactly the same when hooked up to a PC.) That includes the more complete button layout and shift indicator lights that were exclusive to the G29 last time around. 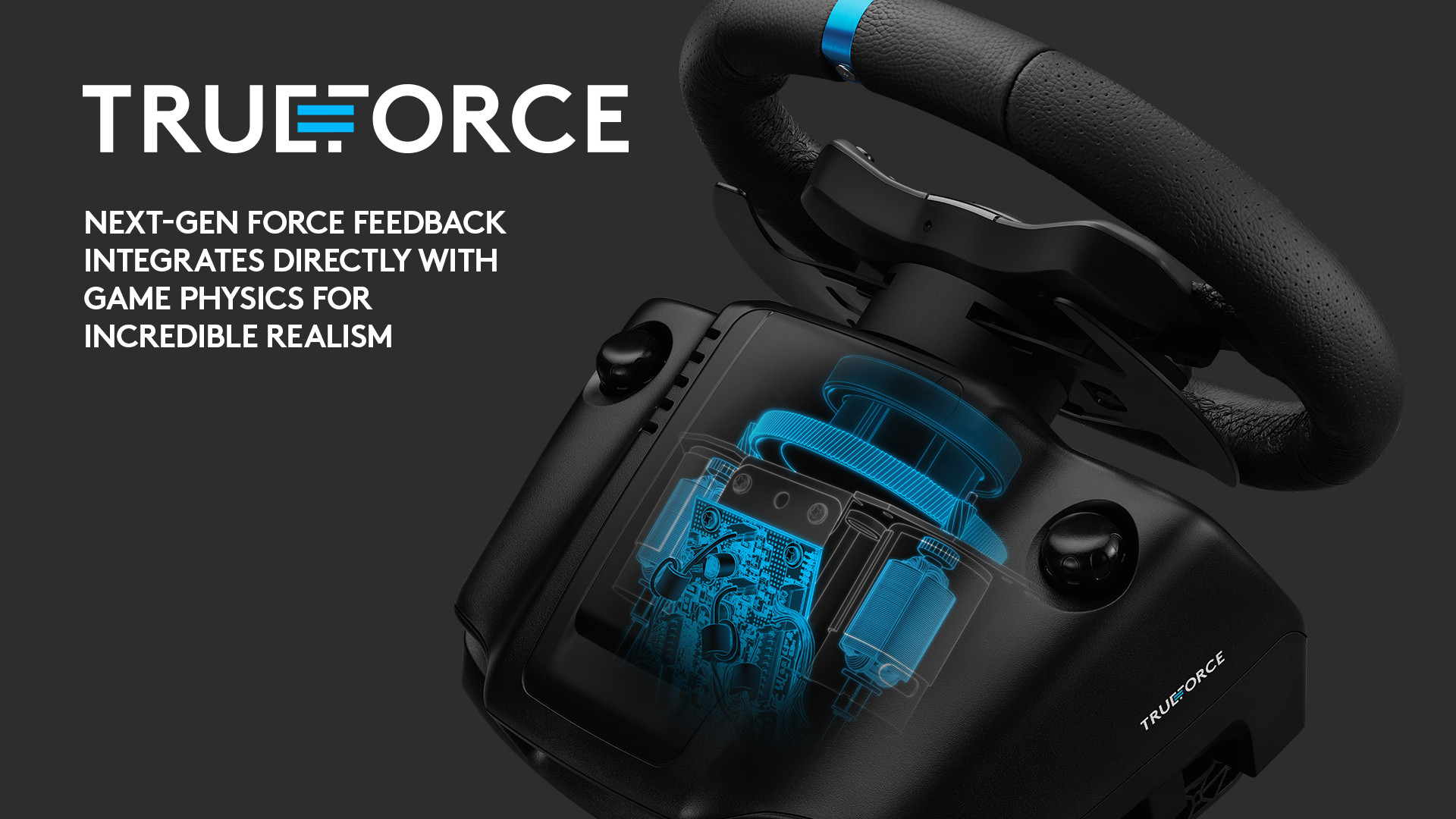 The gears and motors are the same in the G923, but the brain that powers them is all new.Image: Logitech

I had an opportunity to test the G923 and its TrueForce system in a pre-release version of GRID ahead of today’s announcement. I am not a racing professional, but even I could tell the difference between the basic force feedback systems available in other wheels and the new TrueForce engine. (Games that have support for TrueForce allow you to disable it or tweak the level of its feedback.) I could feel the engine vibrating through the wheel, much like you can with a real racecar, and I knew exactly when I was driving off course and the wheels lost their grip, even if I couldn’t see it happening through the car’s cockpit view. After a few races with TrueForce enabled, I turned it off, and the experience felt numb, like something was missing. 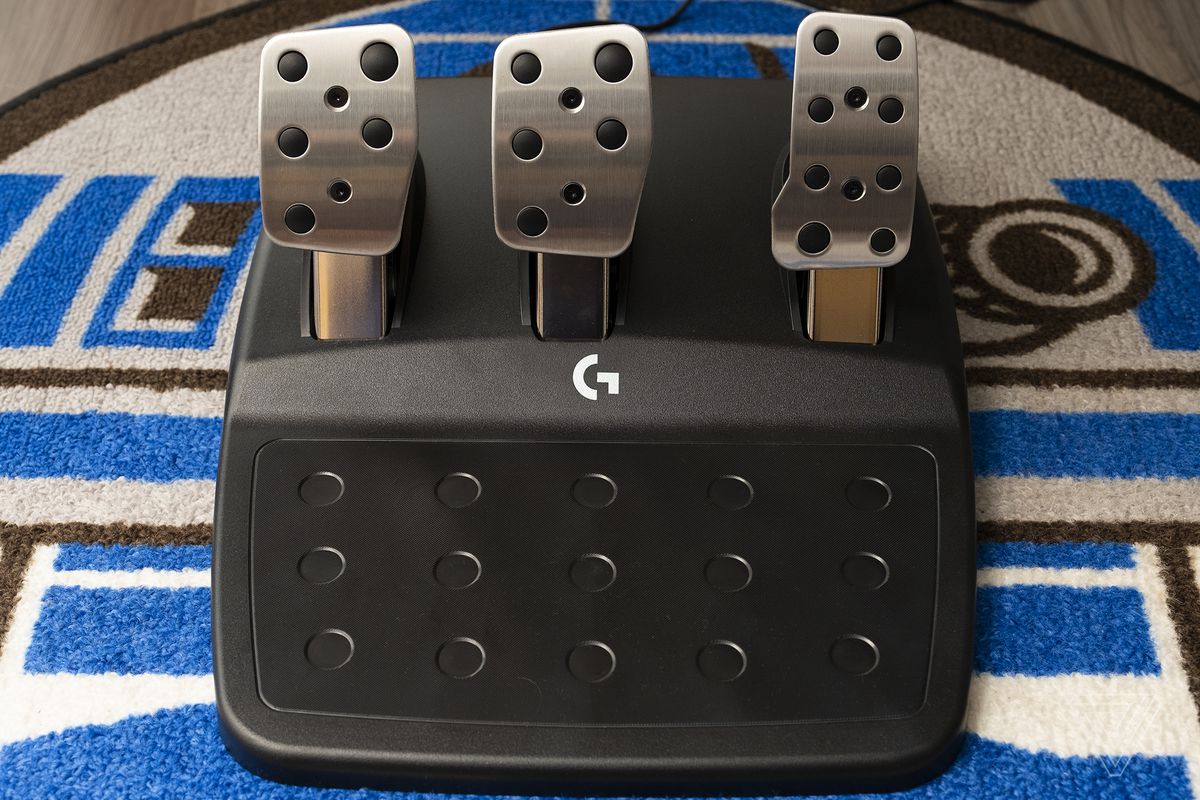 The pedal set that is included with the G923 is visually the same as prior models, but the brake pedal now utilizes a progressive spring.Photo by Dan Seifert / The Verge

Logitech is launching the G923 at an interesting time, when racing simulators have never been more popular. All of the major professional racing series held virtual races this year, where pro drivers used similar wheels and pedals to Logitech’s and others, and games like iRacing have exploded in popularity with amateurs and professionals alike. Logitech says it hasn’t been able to keep its wheels in stock for the past four months, and it expects demand for the G923 to be high as well. As a result, it is keeping the G29 and G920 in its lineup and will offer them at a lower price than the G923.

At $400, the G923 is on the lower end of what’s available in the racing wheel market now, but it’s still compatible with a wide variety of racing seats and accessories (including Logitech’s existing six-speed manual shifter). Many enthusiasts and professionals have built their entire racing simulation rigs around the G29 and G920, and it’s likely that the G923 will be just as popular.