Bill & Ted Face the Music feels a bit like a prank. Franchise filmmaking is king now, and because of this, any revival feels cynical by default. Bill & Ted’s Excellent Adventure and its sequel, Bill & Ted’s Bogus Journey, are perhaps among the least cynical films ever made: sincere romps through time and the afterlife starring sweet morons who love rock n’ roll. They lack any sort of edge or hint of darkness (even when they go to Hell) and delight in their lack of sophistication. There’s not a lot there, but that’s what makes them charming. This makes the idea of a third film, released over 30 years after the first, feel like a stretch. Yet it might be my favorite movie released this year.

I saw Bill & Ted Face the Music at a drive-in theater. It was something my partner and I had always wanted to do (drive-ins, not Bill & Ted) but lacked the opportunity. In a pandemic, however, drive-ins are among the only safe ways to go see movies outside of your home, so we borrowed a car and drove to see the only new movie playing at the drive-in that night. Neither of us had particularly strong feelings about the film — we were more excited about the act of seeing a movie than we were the movie itself — but it felt like the right one to see on a warm summer night with the windows down and truly bad concession stand food balanced on our laps.

Bill & Ted Face the Music, like its predecessors, is a simple movie. Ted “Theodore” Logan (Keanu Reeves) and Bill S. Preston, Esq. (Alex Winter), have been told since they were teenagers that their rock band, the Wyld Stallyns, will write the song that will unite the world. However, they are now middle-aged men who somehow haven’t managed to pull it off. Because of this, the world is falling apart. Time and space are collapsing, and Kelly (Kristen Schaal), an emissary from the future, arrives to tell the Stallyns that they have until 7:17 p.m. to write the song or else everything comes to an end. 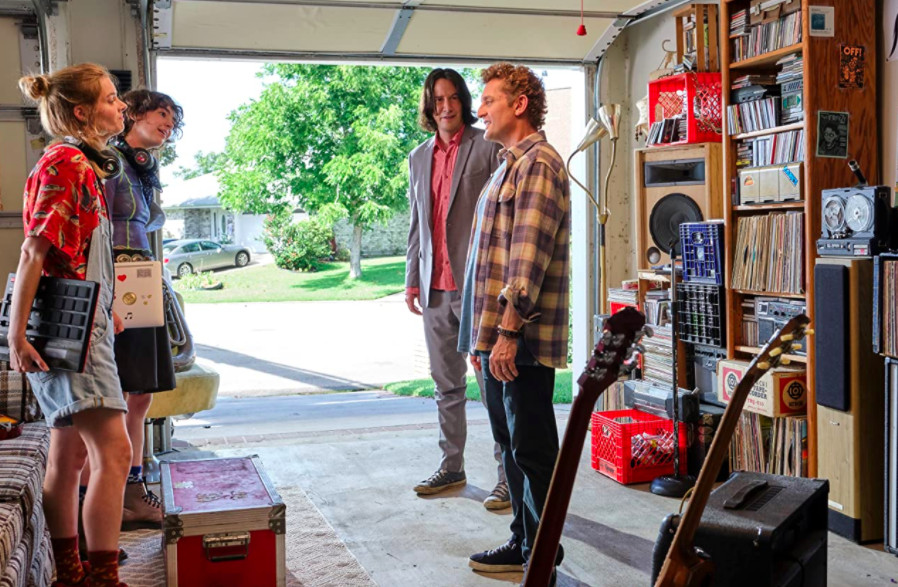 To solve the problem with minimal effort, Bill and Ted decide to try what worked in the past: using a time machine to jump to a future where they’ve already written the song, and bring it back to the present. This goes wrong, and the duo spend the rest of the film trying to smooth over increasingly dire mistakes they make in the future as they continue to neglect the present.

We never think as clearly about the present as we’d like to. I suspect that’s even more true now than it ever was. What, I wonder, will hindsight reveal about this year and how we received it? I watched Bill & Ted Face the Music in a remote New Jersey drive-in because drive-ins are among the few diversions available to me as the world falls apart. That collapse is never far from my mind, least of all during the 91-minute movie about two middle-aged men staring down the end of the world and trying to avoid doing anything about it.

Throughout Face the Music, Bill and Ted travel further and further into their future to find that they never change. Their lives just get worse, because they never stop running from their problems, from trying to cheat their way out of doing the work to fix anything. Their future selves can’t improve until Bill and Ted stop seeking them out, because then that means they’ve stopped cheating their way into the song that saves the universe, and actually started making it.

be excellent to each other and play music really fucking loud

For the last year, I had been planning on getting married this month. That, like a lot of other things in 2020, is no longer happening, postponed for a year. I don’t know if that’s enough time. I doubt it’s enough time. Fretting about it, however, feels frivolous. So I don’t. Instead, I look at all of the other things there are to be angry about right now, and I feel that instead.

So at the end of Bill & Ted Face the Music, I cried, because the present is the one thing I haven’t figured out yet, six months into calamity. I don’t know if the decisions I’m making today are the right ones or wrong ones, and I’m running out of fictions to spin myself to justify living and working and paying bills like the world isn’t literally on fire. I cried because the wedding we thought we’d have will probably never happen, because no one is getting the tomorrow they hoped for. And I cried because at the end of the movie everyone does stand up and face the music. Not because they’ve figured anything out, but because they love the hell out of each other. That’s all they really know how to do — be excellent to each other and play music really fucking loud. It’s just about all I know to do, too.