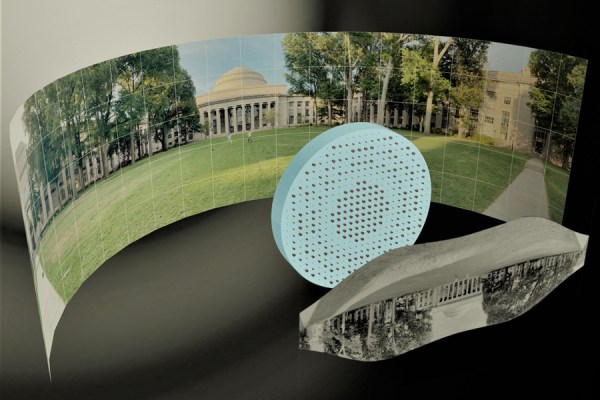 Engineers at MIT, in partnership with the University of Massachusetts at Lowell, have devised a way to build a camera lens that avoids the typical spherical curve of ultra-wide-angle glass, while still providing true optical fisheye distortion. The fisheye lens is relatively specialist, producing images that can cover as wide an area as 180 degrees or more, but they can be very costly to produce, and are typically heavy, large lenses that aren’t ideal for use on small cameras like those found on smartphones.

This is the first time that a flat lens has been able to product clear, 180-degree images that cover a true panoramic spread. The engineers were able to make it work by patterning a thin wafer of glass on one side with microscopic, three-dimensional structures that are positioned very precisely in order to scatter any inbound light in precisely the same way that a curved piece of glass would.

The version created by the researchers in this case is actually designed to work specifically with the infrared portion of the light spectrum, but they could also adapt the design to work with visible light, they say. Whether IR or visible light, there are a range of potential uses of this technology, since capturing a 180-degree panorama is useful not only in some types of photography, but also for practical applications like medical imaging, and in computer vision applications where range is important to interpreting imaging data.

This design is just one example of what’s called a ‘Metalens’ – lenses that make use of microscopic features to change their optical characteristics in ways that would traditionally have been accomplished through macro design changes – like building a lens with an outward curve, for instance, or stacking multiple pieces of glass with different curvatures to achieve a desired field of view.

What’s unusual here is that the ability to accomplish a clear, detailed and accurate 180-degree panoramic image with a perfectly flat metalens design came as a surprise even to the engineers who worked on the project. It’s definitely an advancement of the science that goes beyond what may assumed was the state of the art.