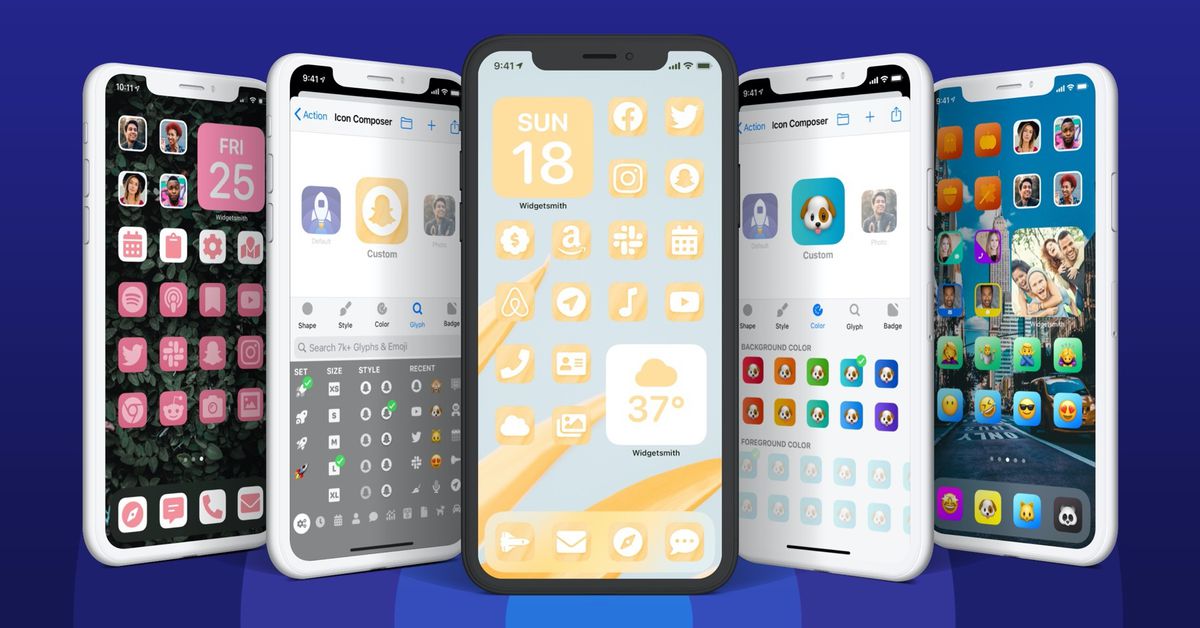 iPhone icon customization is booming, thanks to new features in iOS 14, but there’s still some big catches. The workaround for a bespoke iPhone homescreen requires routing through Apple’s Shortcuts app every time you want to open an app, and the process of customizing all your apps one-by-one is a time-consuming and frustrating task.

But Launch Center Pro — a popular tool for customizing and creating quick shortcuts on iOS — has solved both of those issues with its latest update. With a clever workaround that uses Apple’s own Profiles system to install custom “web clip” profiles that directly link out to your selected apps, users can finally make custom icons that work just like regular apps. Plus, they can be installed in a batch, allowing users to easily add custom icons for almost all their favorite apps in one fell swoop.

It’s not a perfect system: users will still have to set up each app, one by one (although Launch Center Pro does make getting that set up a little easier), and you’ll still have to hide your “real” apps to iOS 14’s App Library, given that Launch Center Pro’s direct links are still, well, links. Still, it’s a far better solution than using Shortcuts, one that makes installing and using custom icons a viable option for day-to-day life. And due to limitations from Apple, the direct linking only works for third-party apps from the App Store — Apple’s own apps still have to bounce through either Shortcuts or Launch Center Pro.

The actual process of getting all your apps installed is a little complicated, but Launch Center Pro has helpfully put together a handy video guide that should help you through it. (There’s also a TikTok version, which makes sense given that the popularity of custom icon layouts has surged in large part due to videos there.)

The best customization option yet for iOS users

Launch Center Pro offers several options for its custom icons. Users can directly import existing photos or images from their phone, in the event that you’ve already created your own bespoke icons (or bought a pack from an enterprising seller on Etsy.) There’s also an icon composer, which lets users easily create their own custom icons out of preset backgrounds and tons of preset glyphs. The company has already hired a new designer to continue to create more icon backgrounds, custom icon packs, and styles for the icon composer, too.

And according to developer David Barnard, the company is already working to add more functionality to make Launch Center Pro’s icon system work even better in the future, including the option to save multiple icon sets (so that users can easily swap between setups), the ability to share icon sets to other users, and faster import options to allow pre-made icon sets to be added to Launch Center all at once.

Some of the features here are based on existing options that Launch Center Pro has already offered. But those icons still had to route through Shortcuts — with the new update, they’re able to directly link to any app on the iOS App Store. And of course, all of these complex workarounds are needed because Apple refuses to offer any real customization options in the first place, an issue that the company seems unlikely to relent on anytime soon.

Launch Center Pro is a free download, but many of its features — including the option to add custom app icons to the home screen — require either a monthly subscription (for $14.99 per year) or a one-time purchase for lifetime access ($24.99 for the icon composer tool.) The company also offers a $74.99 lifetime bundle that permanently unlocks all current and future features.

Correction, October 19th, 4:02pm: Launch Center Pro previously had a $4.99 in-app purchase for custom home screen app icons, which allowed users to customize the app icon for Launch Center Pro. This article originally listed that as an option to enable custom app icons for third-party apps. That option has since been removed from the app, while the option to customize other apps requires either the monthly subscription or one-time payments for the icon composer or monthly bundle.