The news follows a report last week in The Information claiming that Hired had begun to sell off its assets and wind down the company. The report also stated that Hired CEO Mehul Patel “abruptly resigned” via Zoom in early October.

Brenner told me that the two platforms are largely complementary, with only a 5% overlap in their respective customer bases. Hired, he said, has built AI job-matching tools (as well as talent assessment and bias reduction features) that are particularly well-suited for software and engineering positions, while Vettery offers “a little bit more breadth in the verticals that we support.”

“The key is bringing scale to these marketplaces,” Brenner said. “We see this as a formidable competitor to any of the legacy hiring solutions.” 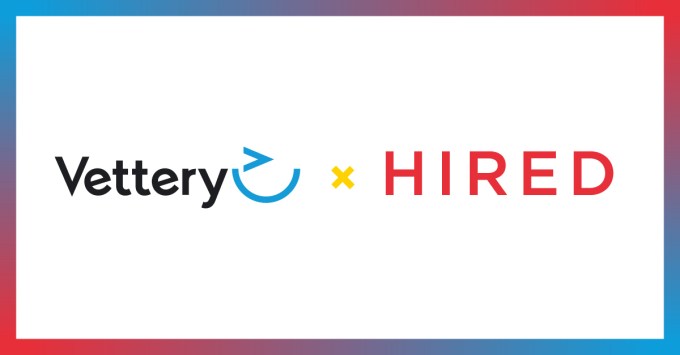 The plan, he added, is to create a single “unified solution” that brings together the best of both platforms. Vettery says this solution will offer job-matching AI that draws on combined data from 1.5 million interviews and more than 21,000 job placements.

Asked whether the combined site would operate under the Hired or Vettery brand name, Brenner said, “We believe there will be one brand in the future. Right now, we’re continuing to keep both brands while we do the research to figure out what the best approach is.”

Hired was founded in 2012 and raised more than $130 million in funding, according to Crunchbase. Vettery, meanwhile, launched in 2014 and was itself acquired two years ago by HR services firm Adecco Group.

The financial terms of the acquisition were not disclosed.

Asked how many Hired employees would be joining Vettery, Brenner said it was too early in the transition to specify, but he added, “Not only does Hired have a great client base, they’ve also got an amazing team that we’ve admired as well and gotten to know over the last period of time … so we’re extremely hopeful that we can bring together as many of those talented people as possible.”