I did not expect to like the Amazon Echo Frames as much as I do. The concept is relatively simple: they’re a pair of eyeglasses with tiny little speakers and microphones embedded in the stems so you can listen to music and command Alexa. They run $249 and come with basic plastic lenses, but you can take them to an optometrist and get prescription lenses.

It’s a much smarter strategy than the failed smart glasses that tried to add a display into the mix. Maybe that’s in the works, but as with many of its products, Amazon starts with a minimum viable product and iterates. That’s doubly true for these Echo Frames, which are now widely available for anybody to buy in a version two of the product that makes some tweaks to the internal hardware and battery life.

Amazon isn’t alone in this category, though. Bose is also on its second iteration of sunglasses (or eyeglasses) with little speakers in the stems — and it offers multiple styles, to boot.

The Echo Frames have sold me on the concept of having discreet, personal audio available at all times. It’s a bit like discovering headphones all over again. But while I’m sold on the concept, for reasons both in and out of Amazon’s control, the experience of actually using the Echo Frames falls well short of their potential. 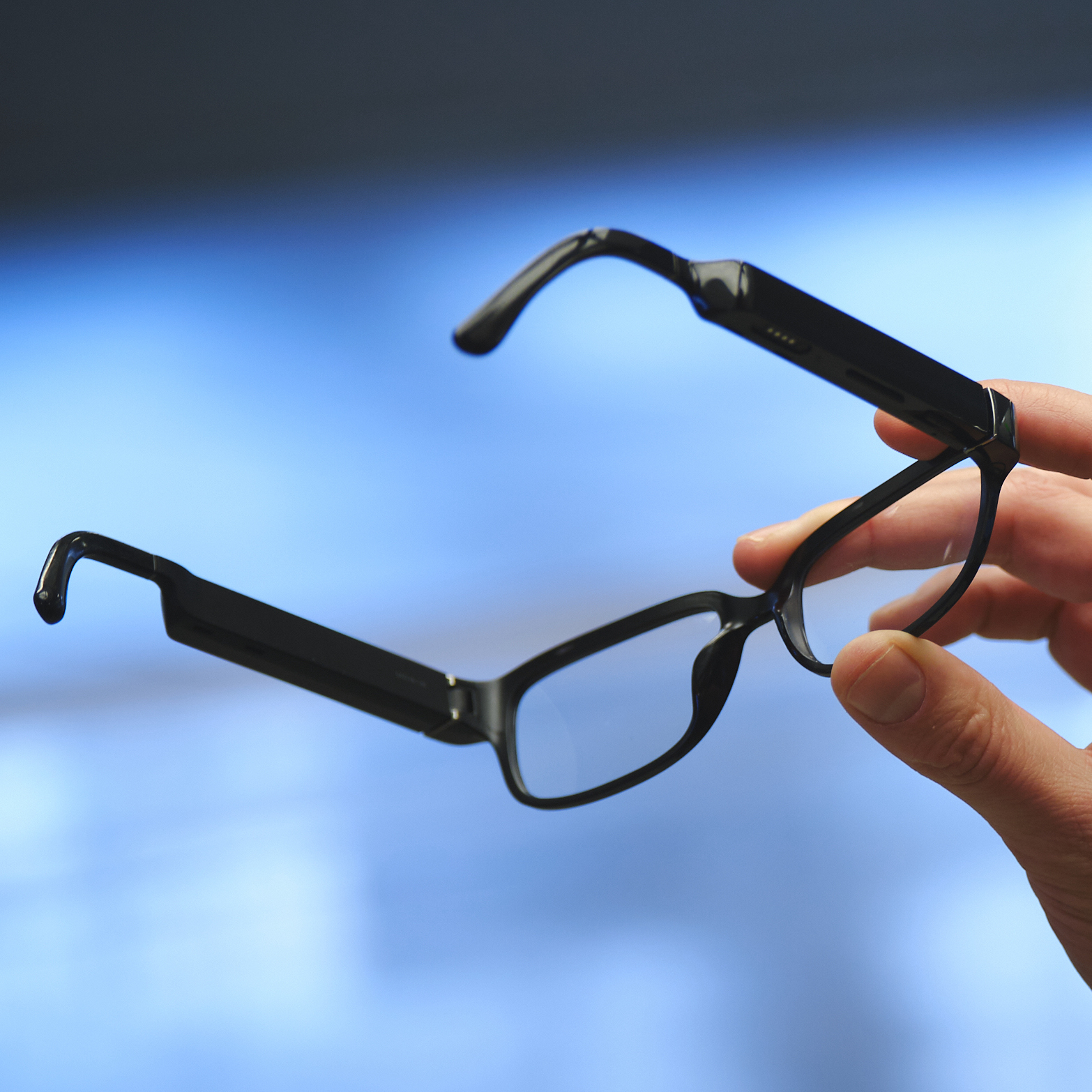 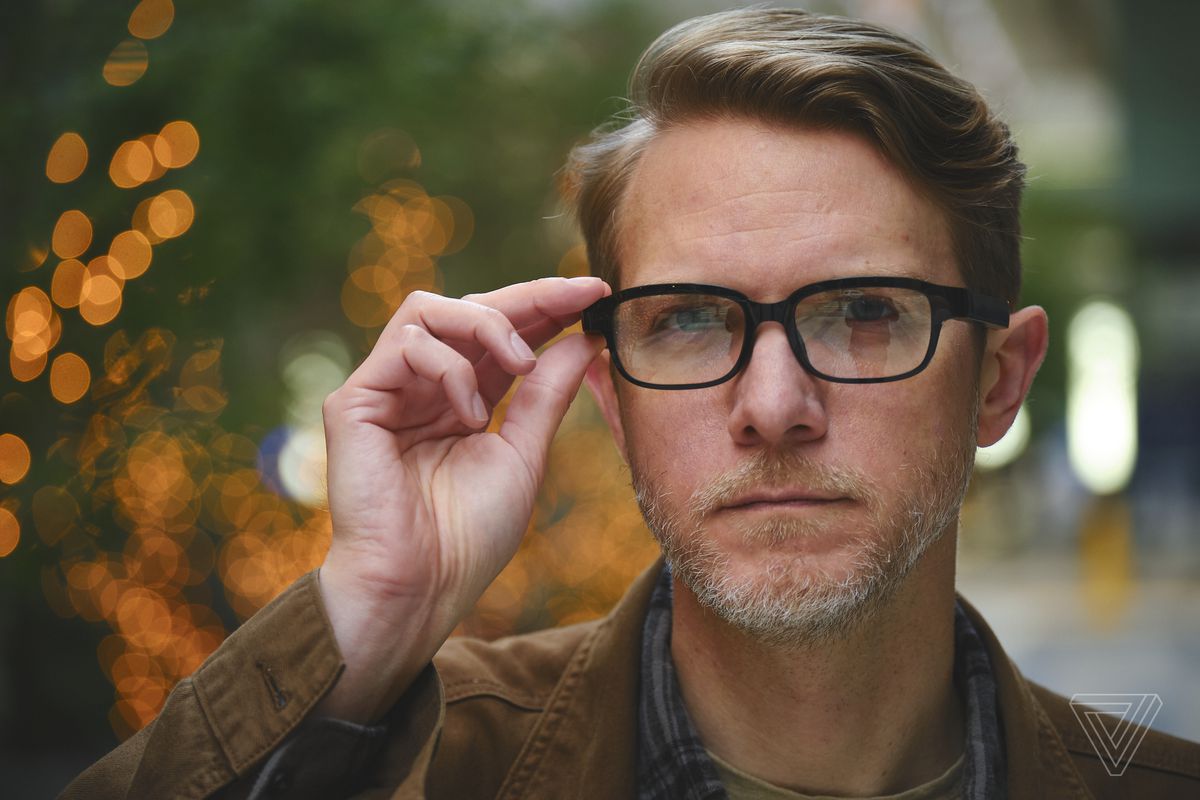 The Echo Frames look like relatively normal — but cheap — eyeglasses.

The Echo Frames are basic, rectangular glasses. They’re made entirely of glossy plastic and come in three different colors: an all-black version, a tortoiseshell design, and a version that fades from black to blue.

They’re also quite large. It’s a one-size-fits-all product, but that’s not really how glasses work. They felt comfortable on my head, but I do think they look a little big — maybe I just don’t like this shape. The stems have plenty of flex where they attach, at least.

They look normal, but they don’t look especially nice 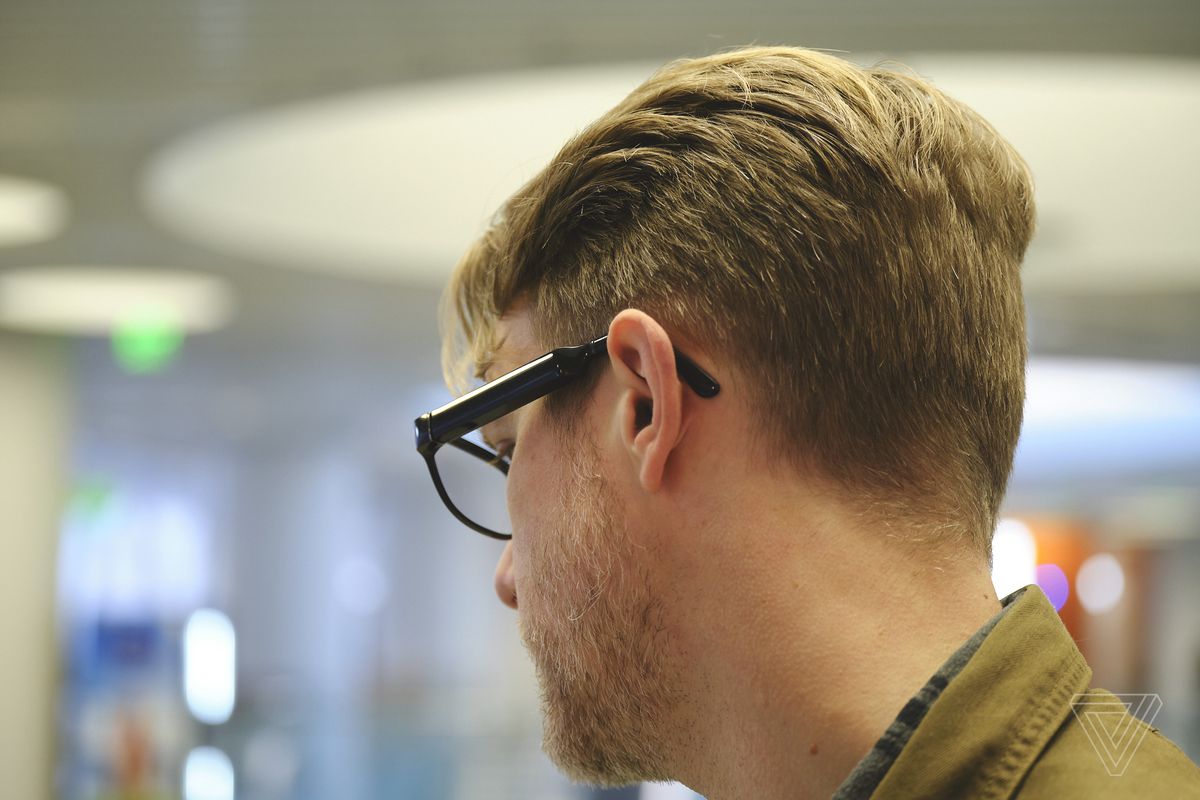 The stems contain all the electronics, and are quite thick.

Amazon has a partnership with LensCrafters to help people get prescription lenses added to the Echo Frames, but I used them as they shipped, with clear plastic lenses. Those built-in lenses are reflective as hell, making them so distracting during Zoom calls that I had to take them off. (I normally wear glasses, so I had contact lenses in during my testing.)

As far as the techy components go, they’re subtle. There is a mic, power button, and a couple of volume buttons on the underside of the right stem — plus a magnetic pogo pin receiver for charging. Each stem has two tiny holes located back near your ear for audio. The right stem also has a touch sensor on the side that’s able to detect taps and swipes.

All those components are there, but unless somebody is looking for them, they’re basically invisible. The only real giveaway that these are smart glasses is that the stems are quite thick, narrowing suddenly so they can actually fit behind your ears. I was worried they’d feel heavy (I prefer glasses on the lighter side to begin with), but they never felt that way to me — Amazon clocks them at 31 grams. I was also worried they would look somehow techy, but fortunately they don’t. They just look kind of, well, cheap. Even just offering a different finish on the plastic might have helped. 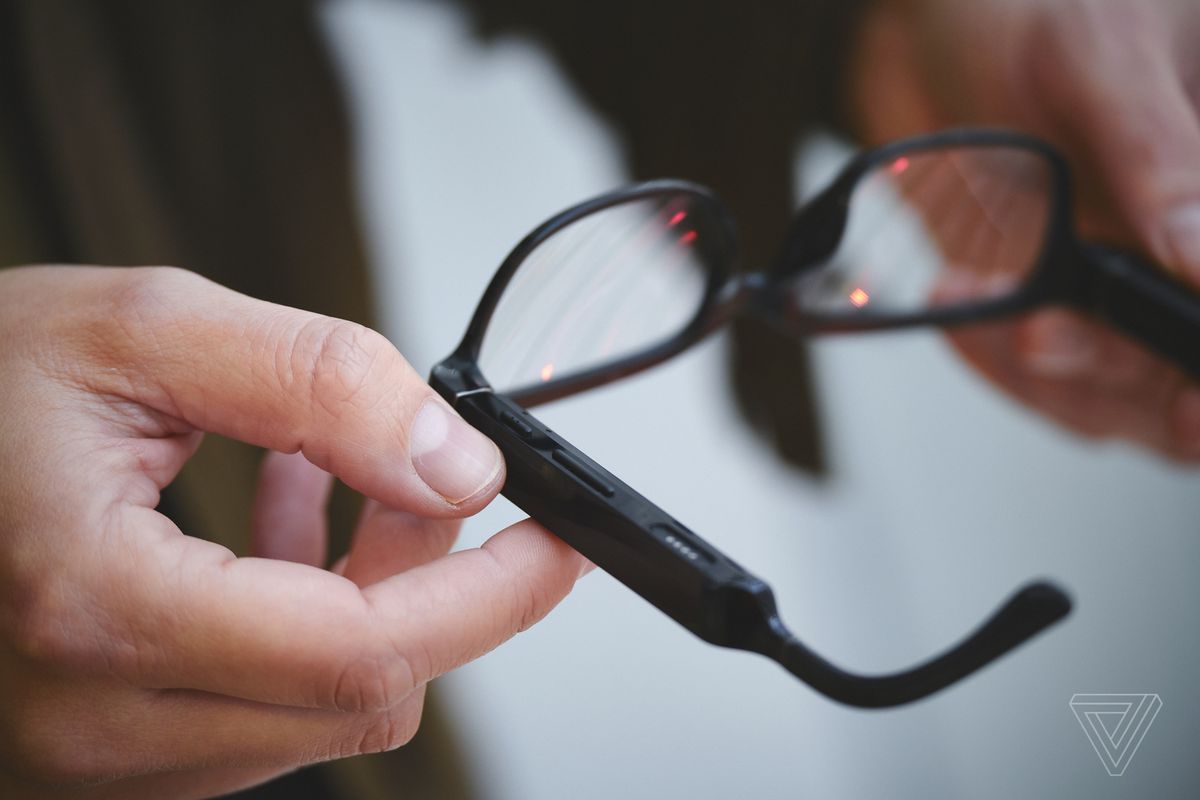 All the physical controls for the Echo Frames are on the right stem.

There are two ways to use the Echo Frames: as basic Bluetooth “headphones” and as an Alexa device. Obviously Amazon intends you to do the latter, but I found that they were surprisingly decent as teleconference and telephone call headphones. Unfortunately, they can only be paired to one device at a time and require a full re-pairing to switch devices.

Really, these are meant to be accessories to your phone only, and so the only good move is to set them up inside the Alexa app like any other Echo device. There are a few unique options, like setting up an automatic volume feature that tries to set the volume just loud enough to overcome ambient noise. Otherwise, if you’ve used any other Echo device, then the experience here is about the same.

The iPhone limits what the Frames are allowed to really do

That’s both good and bad. It’s nice to just have Alexa available all the time, whether you’re at home or not. But since the Echo Frames are paired to a phone, you’d like to think that Alexa would be able to do the sorts of things you expect a digital assistant on a phone to do. It cannot.

I used the Echo Frames with an iPhone, and basic tasks that Siri can do like making calls or responding to texts are just never going to happen for Alexa. When I asked Alexa to “Call Dan Seifert,” Alexa defaulted to using its own teleconferencing system, which meant that my attempt to just ring Dan’s cellphone resulted in every single Echo device in his house ringing and annoying his entire family. (You can also use Siri with the Frames with a long press on the stem, at least.)

There is one interesting phone trick I appreciated: the ability to pick and choose which notifications get announced. When a new notification comes in, you can tap or swipe to tell the Frames whether you want to hear notifications from that app read aloud to you. I’m normally super annoyed by audio systems for notifications, but this one makes it easy to filter them down to the very urgent stuff, and to dismiss them.

As an Alexa device, I really have few complaints. It took a little while for the Echo speakers in my apartment to figure out that I was talking to my glasses instead of them, but that eventually settled down. 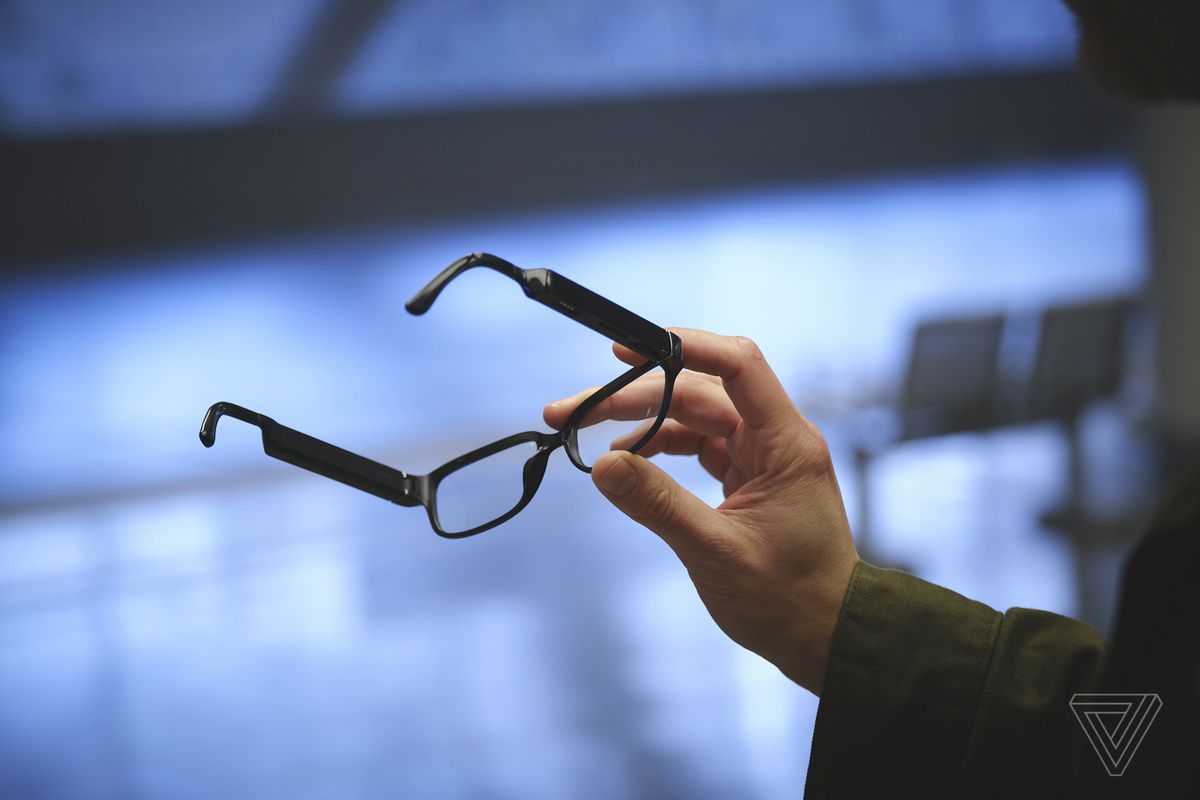 There are tiny speaker holes right in front of your ears on each stem.

Maybe my favorite software trick on the Echo Frames is that when you set the glasses down on a table upside-down, they turn off after a few seconds. I think it’s also a necessary trick. Although Amazon promises you can get through a “14-hour day” of mixed use, that mixed use really boils down to just over three hours of actively using the speakers.

That’s really not long enough, honestly. I know that because I was killing the battery on these glasses by mid-afternoon every day — because I was using them much more than I expected to. Working from home, I’m constantly donning and doffing headphones to listen to music, take calls, talk to my spouse, or just give my ears a rest. With the Echo Frames, my source of audio is just there, unobtrusive and always available.

They were so convenient and handy that I was all the more annoyed by their shortcomings. I couldn’t connect them to my computer without significant hassle and their battery life simply wasn’t up to the task of doing what I wanted.

They were so convenient, I wanted to use them more than the battery could handle

I don’t know exactly how I should judge the sound quality. The Echo Frames have tiny speakers that sit just forward of your ears, so expecting deep bass or really anything great would be a mistake. They did provide clarity, however, both in listening to music and podcasts. When I used them for phone calls, people on the other end were surprised to hear I was on a Bluetooth headset.

Those little speakers are also remarkably good at being directional. In most environments, you can hear them loud and clear while somebody standing just a couple feet away would hear nothing.

It’s great that your ears are open — I felt much safer using the Echo Frames while riding my bike than with my usual one-earbud-in, one-earbud-out habit. Unfortunately, the Echo Frames just don’t get loud enough to compete with street noise. Even cranked to the max, it can be difficult to hear the Frames when there’s traffic, and if you’re in a loud subway train, forget it. 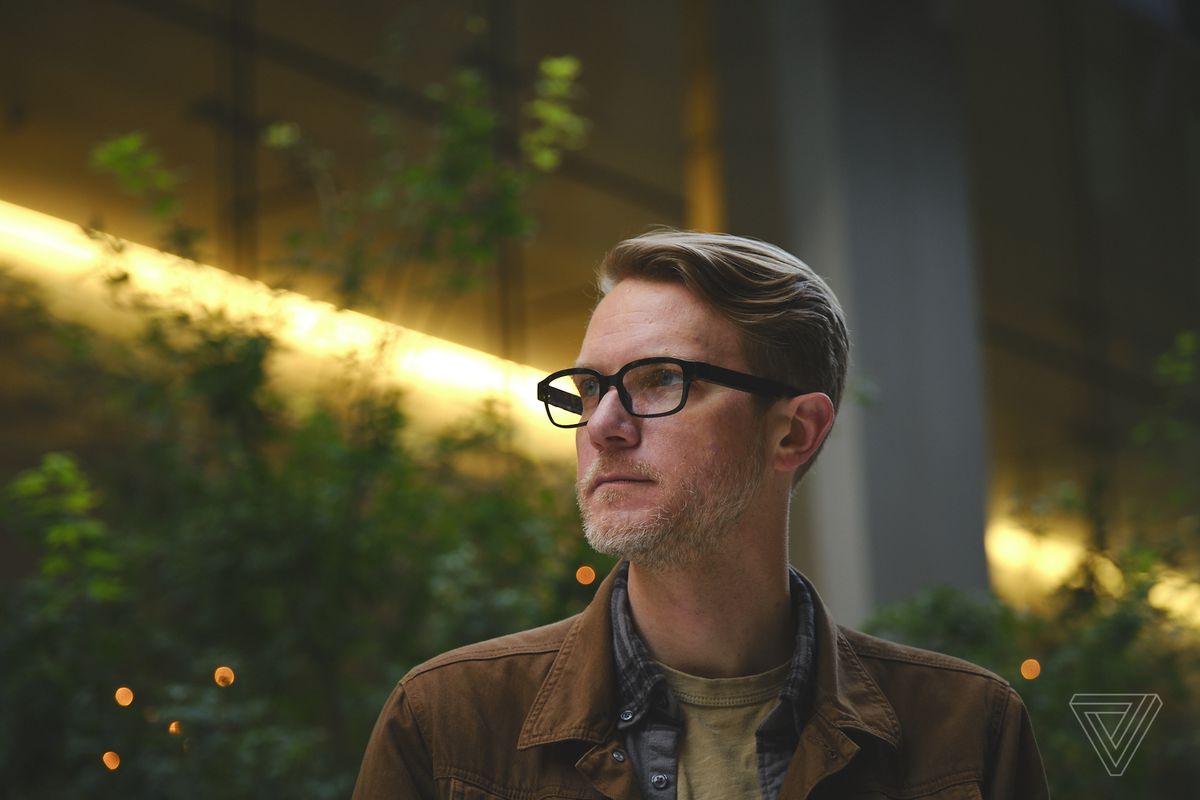 I did have some strange moments with the Echo Frames. Wearing headphones is a big social signal that your ears are occupied and your attention isn’t immediately available to those around you. But with the Echo Frames, you look the same whether you’re staring into space or listening to a podcast, so people around you will just start talking to you as though you weren’t wearing headphones.

There are places where social interactions with Echo Frames are less fraught. In a doctor’s office waiting room, for example, I could listen to a podcast while still able to listen for my name when it was called. Being able to not only do that but also not be the guy with one earbud in was nice.

A few days into using the Echo Frames, I suddenly realized I had stopped messing about with the volume on my phone anymore. I constantly am riding the volume buttons to either listen to a quick video or silence one. But just having convenient, comfortable, and personal audio on at all times meant I never had to worry about it. The audio quality isn’t great, but the convenience is.

It was great, and it made me wish for a version of the Echo Frames that didn’t have to make all the compromises Amazon had to make here, especially on battery life (for the size) and on styling (for the price). Most of all, though, I found that while Alexa is great in my house, it feels like Apple put a hard ceiling on what it’s allowed to do on an iPhone.